As clubs come to terms with human tragedy of coronavirus, they will also face a very different challenge for survival It has been just over a week since Hamble Club FC released a heartfelt statement that would devastate the local grass-roots football community.

"Last night one of our beloved Monks, Dave Cox passed away peacefully at home," read the message. "Dave was at the core of the club for many years and a favourite of all involved at the Abbey. Dave was laid to rest in a Hamble shirt by his son Danny, the way he would have wanted. Our hearts go out to Danny, Ange, and the rest of the Cox family as well as the wider community of people who will be deeply saddened by this news."

Numerous messages of condolence followed for Hamble's popular kitman, who had experienced symptoms of coronavirus before his death, aged 60, at home. His wife, Ange, is an NHS worker at the local hospital and had herself been feeling unwell.

When some semblance of normal life resumes, Hamble, who are based in Hampshire, intend to organise what they hope will become an annual tournament for the Dave Cox Memorial Trophy. "We want there to be a memory of Dave forever," says Steve Harris, the club's groundsman and chairman of a youth section that boasts 456 footballers.

And as they come to terms with this human tragedy that has so touched the local area, Hamble's committee of volunteers are now also faced with the very real challenge for survival being shared by thousands of grassroots football clubs across the country.

A torrid winter of weather has not only destroyed fixture schedules to the extent that some children have not played since Christmas but left already inadequate pitches in an increased state of disrepair. 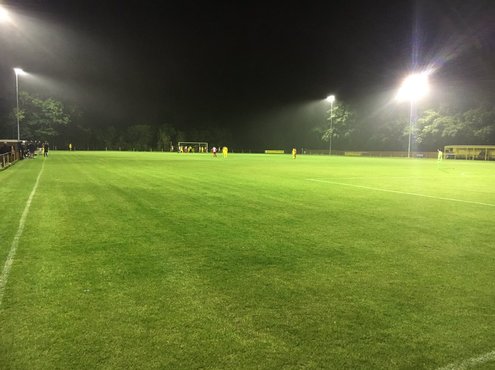 The coronavirus pandemic has then deprived clubs of many of their usual summer fundraising activities and, amid the wider likelihood of recession, now facing huge uncertainty over crucial local sponsorships.

Most clubs are also already resigned to lost fees, whether through league affiliations or pitch hire over season-long training or match arrangements.

There are concerns over the future viability or costs of some 3G sites, with owners and operators previously reliant on busy programmes of use.

Those clubs who own some of their facilities also have maintenance or utility costs at a time of no income.

"I know of at least three local clubs that are going to be lost," Harris says. "It seems to be the smaller teams that are likely to be most affected. Some of their players may be absorbed by the bigger local clubs but those smaller clubs are often the places where kids get their first opportunity.

"A lot of the teams at the bigger clubs can already be quite settled and chasing something - a promotion or a cup. I fear it's those children who might start a bit later who will increasingly struggle to find a team."

For Hamble, the coronavirus has meant that there will be no annual tournament - which raises around £7,000 - to compound a loss already of £10,000 from the absence of first-team fixtures through March, April and May. They have 33 teams across the club, including women's and girls' sides, four disabled teams and age-groups running from under-eights to a first team at step five of the non-League pyramid who generally attract crowds of up to 100.

Previous drainage work on the first-team pitch helped to mitigate the wet weather, but the flooding has still left a summer bill of almost £10,000 to get the surface ready for next season. Where that will come from is unclear.

Two-thirds of the teams would normally also renew sponsorships this summer, but Harris is already expecting many of the sides to use the same kit as the previous two seasons. As he lists some of the costs associated with youth football, you understand the difficulty with keeping the national game affordable to children. Local 3G pitches cost £120 per hour to hire. That contributes to a yearly bill across the club of £25,000 in pitch fees. The hire of training facilities adds £3,500 a month. The club did consider turning their own first-team pitch into a 3G facility, but that would have cost around £900,000. Then there are the usual outgoings for basic training equipment such as balls and goals. "It is a very expensive sport," says Harris, who has long advocated a one per cent transfer levy from the professional game for grass-roots football.

Barry Simmons, the programme editor at Tring Athletic (who play at the aptly named Grass Roots Stadium), also suggested this week on Twitter that an estimated £13 million of outstanding FA Cup prize-money could be distributed to the bottom of the football pyramid. His message received thousands of likes and he heard from clubs telling him that just £1,000 could secure their existence. "A lot of clubs, whether right or wrong, have spent money to get promotion and that's now null and void," Simmons says. "It's wasted. A lot of the fees have been paid up front and clubs have no money coming in."

There are more than 20,000 clubs and 90,000 grass-roots football teams in England and many have already applied to Sport England's Community Emergency Fund for a slice of £20 million in grants from £300 to £10,000. This, though, applies to community clubs across all sports and, the website for the Community Emergency Fund has a fairly striking caveat. "Given the enormity of the current crisis, we're likely to get more applications than we can fund," it says.

There are other schemes as part of Sport England's wider £195 million emergency package for the sport and physical activity sector, as well as FA and Football Foundation projects.

Whether this will be sufficient is unknown and, amid the focus on the very top of football's already distorted pyramid, perhaps the biggest fear should surround what will be left of the foundations.

You can read the original article from the Telegraph here