1 The curse of blades 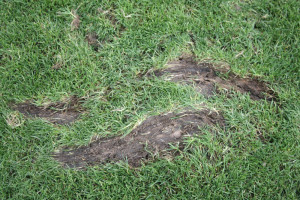 Whatever your particular branch of groundsmanship, I'm sure you have your own pet hates when it comes to the users of your work place.

Greenkeepers, I know, are always bemoaning golfers who refuse to replace their divots or repair pitch marks. Cricket groundsmen seem to have a problem with bowlers following through onto the wicket alongside the one in use. Mine, as a football groundsman, is something called blades.

For those of you not up to speed with blades, here is a brief history of their development.

In 1994, Adidas released the Craig Johnston designed Predator football boot. Johnston is best remembered for his time spent with Liverpool throughout the 1980s. After retiring, he designed and created the prototype for the Adidas Predator football boot, which went on to be worn by many footballers and rugby players due to their revolutionary design, styling and technology.

The Predator featured polymer extrusion technologies and materials allowing for a more flexible sole as well as the conventional studs being replaced by a bladed design covering the sole, supposedly giving a more stable base for the player. A year later, Adidas released their bladed outsole 'traxion' technology which had tapered shaped blades.

These boots became very popular due to some high profile users, such as an emerging young player called David Beckham.

It became increasingly fashionable for players to opt for blades instead of traditional conical studs, with many feeling they offered better grip whilst maximising sprinting ability.

At around the same time as blades were becoming more and more popular during the mid 90s, advancement in football pitch surfaces was also on the move, with sand based pitches, Desso Grass Master, Fibrelastic, undersoil heating and growing lights becoming the norm. The surfaces being produced were becoming firmer with thicker stronger swards. Some managers were expressing concerns that the blades were getting caught in the lush turf and causing injury.

My main gripe with bladed football boots is how, in certain situations, they just totally strip the grass off the top surface leaving a massive scar.

For us mortals in the lower leagues or any school or parks pitch groundsman, these scars are there for the rest of the season once the grass has stopped growing.

I do not even think blades give any better grip than conventional studs and, in certain conditions, they are a massive disadvantage. Certainly on a lush, wet pitch I have seen lots of players struggling for grip.

I have expressed my concerns about blades, and the detrimental effect they have to the playing surface, to every manager we have had at the club. Most agree with me, but they all come back with a similar reply along the lines of 'you have to let the players wear what they are comfortable in'. Matters are also complicated by commercial contracts players have with boot manufacturers.

Having said that, I have had conversations with visiting managers who have banned players from wearing bladed football boots. None other than Sir Alex Ferguson banned such footwear at Manchester United years ago. The reasons for banning them were not in order to protect playing surfaces, but to protect the players'precious feet.

Over a period of five years, at the start of the 'noughties', England's top players Wayne Rooney, David Beckham, Stephen Gerrard, Danny Murphy, Gary Neville, Trevor Sinclair, Ledley King, Michael Owen and Ashley Cole all fell foul to the same injury, the broken metatarsal. It was an injury that was unheard of in football until the fracture of the second metatarsal in the left foot of the England football team's captain, David Beckham, just weeks before the 2002 World Cup that dragged the three inch long bone from relative obscurity into tabloid headlines.

Beckham's break, a type of trauma more common amongst people dropping objects onto their foot than among football players, focused attention not just on the metatarsal, but also on the type of boots players were wearing. The old pros were all wheeled out with the usual "we never had this injury in our day, but then we wore proper boots".

This statement brings us full circle because, in 'their day', pitches were soil based and the boots they wore were not glorified carpet slippers and had six conical studs on the bottom. So, the old fashioned boots protected the foot, the soil based pitches had give in them and the six studs never got caught in the turf.

Sadly, as much as I despise bladed football boots, I will have to live with them for now, as I can see there will be no way they will be banned on the grounds of the damage they do to the playing surface but, as medical evidence grows, perhaps they will disappear from players' feet.

Keep the faith; and keep cutting the grass, after all that's all you do.