0 The curse of the Giant Hogweed

Rivers and lochs are one of Scotland's greatest natural assets. They support a diversity of flora and fauna; provide a recreational resource and represent a major contributor to the national economy.

Any factors that threaten their viability is a cause of not only national but also international concern - one reason why Ayrshire Rivers Trust has attracted six-figure European Union funding for a four-year project that aims to tackle invasive weeds proliferating within its riparian areas and restore wildlife habitats for native species.

The scale of the weed treatment work required is far-reaching and labour intensive, as it has to be undertaken on foot by contractors and volunteers armed with knapsack sprayers and stem injection equipment.

Riparian environments are particularly sensitive to chemical treatment because of the risk of polluting water courses, so a critical requirement of any treatment programme is that it is carried out by a workforce suitably qualified in spraying such areas.

"We are the lead partner for water voles within the Local Biodiversity Action Plan and deal with other rare and endangered species such as fresh water pearl mussels. And, of course, we are now regarded as a leading authority on Invasive Non Native Species - both plants and animals which all fall under the title of Biosecurity."
The River Irvine and its catchment in North Ayrshire has the second highest population densities of all the salmon rivers in Scotland.

"More people bring more problems, be they water quality issues or habitat loss or damage," adds Stuart. "In contrast, areas of low population density in the south of the region, such as the River Stinchar catchment, don't suffer from pollution to the same extent, but have huge problems with invasive weeds due largely to the historic private estate structure that often still exists."

Since 2007, the Trust has researched the scale of weed infestation within its area and began control of invasive species along the upper reaches of the River Ayr.
The award, last year, of a four-year £300,000+ INTERREG (Inter-Regional Co-operation Programme) funded project through the Rural Regional Economic Development Fund, with match funding from Scottish Environment Protection Agency (SEPA), Landfill Community Funds and contributions from local authorities, extends such environment protection measures, covering weed treatment programmes, management strategies, research and data assimilation and processing. 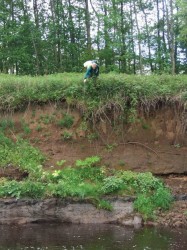 The project, 'Controlling invasive priority non-native species and restoring native biodiversity' (CIRB) is run in association with four Scottish partners - the Argyll Fisheries Trust, the Tweed Forum, Galloway Fisheries Trust and the Rivers and Fisheries Trusts of Scotland (RAFTS) along with Irish partners from both North and South of the border. Queen's University, Belfast, is the lead partner of the entire project and is conducting extensive research on a number of aspects. "Funding of this kind requires cross-border co-operation," Stuart confirms.

Ayrshire Rivers Trust prepared no fewer than eight tender documents to fully cover the scope of treatment across the affected Ayrshire watercourses.

The scale of the treatment programme is so extensive that it passes far beyond the capabilities of one contractor, stresses Stuart. While Keith's responsibilities cover the lower River Irvine, Annick Water, the River Garnock and the Water of Coyle, another two contractors are handling areas elsewhere identified for treatment.

The Trust rejected a number of bidders for the work because they were not qualified to spray near water, Stuart recalls. "Many were not qualified to PA6AW, necessary for allowing them to spray invasive weeds in a water environment, such as within 10m of a riverbank, so, legally, could not do the job because they may be at risk of polluting water downstream that farmers may abstract for crop irrigation, for example." There was no argument over the choice of herbicide either. "The only product the Trust was prepared to accept was Roundup Pro-Biactive glyphosate, a selective herbicide now widely used for weed control, because we had used it successfully for the last three years."

An unhelpful pattern of "good and horrific" weather in late April and May hampered treatment in the spring though, adds Stuart. "Completing the spraying as soon as possible was critical because Giant Hogweed starts flowering in June and produces vast numbers of seeds, up to 50,000 per plant. It can be killed easily by a single application, but this should be undertaken before it flowers. Timing is critical; too early and not all plants have germinated, and too late and seed has set. There is a very limited window for effective control."

The plant has a four-year lifecycle. Being monocarpic, it dies soon after it flowers. However, if even one specimen is left untreated to flower, its ability to self-pollinate means it can still produce seeds, which can then be dispersed in water to establish fresh outbreaks down river.

Reports of hogweed towering nineteen feet high and "as thick as a man's waist at the base" may be rare, but the generally large size of the species poses a major health hazard for humans if it infests rural walkways and footpaths. Skin contact can provoke an extreme reaction, including burns and recurring photosensitive dermatitis and hyper sensitisation.

In what appears to be a powerful example of the Coalition's Big Society in action, volunteers are set to play a major role over the lifetime of the project, and beyond, as they become the driving force in what is foreseen as a sustainable weed management programme across the Trust's region. 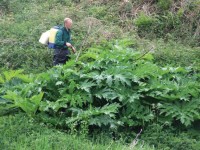 "Part of any project must include an exit strategy and must show long-term benefit," stresses Stuart. "Our funding covers the costs of training up eight volunteers annually (mainly from angling clubs), for the duration of the project, so that eventually we'll have thirty-two operatives, trained to industry standards courtesy of INTERREG, who can take up where the contractors leave off. To date, thirteen volunteer sprayers have qualified, including myself, so I'll be involved on an ongoing basis too."

Keith concludes: "If the Trust hadn't started to control invasive weeds when they did, Ayrshire's rivers and surrounding countryside could have suffered major problems. As it is, some areas are free but others are badly infested."