0 The curse of vandalism

Repeated acts of vandalism have blighted the Beccles Sports Complex in Norfolk.

Liz Read, chairman of Beccles Cricket Club, which is based at the complex, said that they had had several bouts of vandalism from teenagers. "Over the last two years we have lost our new corrugated covers for the square (children jumping on them), wheels have been taken off the sight screens after they had been pushed into the ditch, heavy paving slabs for a new electronic scoreboard have been thrown into the river, and the portable nets have been swung from and bent."

The most recent act of vandalism to the cricket club was when the club had their sightscreens pushed over. 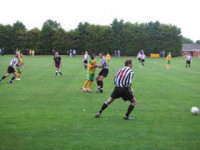 Christian Squire, groundsman for the cricket club, said: "It was a fair night, so it couldn't have been the wind, and it must have been a group of people to push them over because it takes six adults to lift them - they're 12 foot in height. The weight of them smashed most of the wood out - we needed to repair 50% of the wood."

Meanwhile Carole Brathwaite, steward of the social club at the complex, said that a £130 digital television aerial installed by the club was stolen and they have had to install a new one with the bolts filed down so that no one could use a wrench to take it off again.

The club's compound was also broken into last summer, when beer and cider was stolen. One of the fire exit doors was kicked down in a separate incident.
Robbie Page, groundsman for the complex that is run by Waveney District Council, said that he has experienced all sorts of misuse during his seven year stint - including teenagers rubbing dog excrement on the locks and jumping on the roof with BMX bikes.

He said: "We have groups drinking in the grounds, and teenagers running over the sheds, putting planks across to link them."
"They can be very aggressive, and give plenty of verbal abuse. I've been threatened by a 10 year old with a golf club."

Despite this threatening behaviour, Liz Read also complained that the police have shown little interest in the problems, either arriving late or not at all.
Liz said: "Despite the groundsman and the steward phoning the police on numerous occasions they very rarely attend - in fact last time they turned up it was two or three days after they had been phoned."

"Not only are we concerned with this senseless vandalism but also worry that there could be a serious injury should one of them fall off or through one of the roofs."

A spokeman for Suffolk police said: "We would always advise people to call 999 and officers will attend as quickly as possible. The Safer Neighbourhood Teams need to know of this problem so that we can actively target the area."

Facilities at the Sports Ground include three football pitches, two rugby pitches. one cricket table, one artificial cricket strip, one hockey pitch and a Sports and Social Club.

Have you suffered from vandalism? If so, we would like to here from you. How did you resolve the problem? Were the police and local authority helpful? Please contact the editor on 01902 824348 or email laurence@pitchcare.com with your comments.