When it comes to sports turf data collection, the requirements of FIFA echo the challenges faced by other federations in terms of the scale, depth and reporting of information needed. To bring their pitch management programme to life and extract the full amount of value from their data, FIFA turned to GrasPro and have used the system as a tool to successfully reshape their strategy. 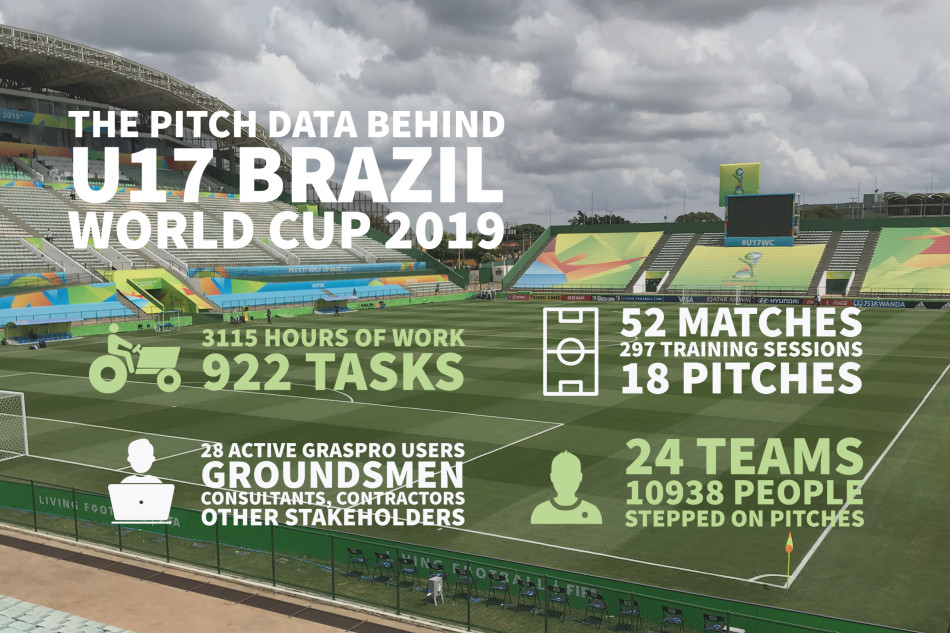 For the world's football governing body, there are the two showpiece events in the men's and women's World Cups. These tournaments occur every four years worldwide, but there is also the age group World Cups held from Under 17 to Under 19. These events, for both boys and girls, are held once every two years.

That means FIFA is preparing for four tournaments at any one time, which are commonly spread across the globe. In 2019 the world football governing body took pitch maintenance in-house for the first time in the federation's history with the appointment of Pitch Management Manager Alan Ferguson.

The sole focus for Alan was to track the quality, condition, and progress of the pitches in each country in the build-up by capturing critical performance data, which allowed himself and his team of consultants to advise on pitch maintenance in between routine visits.

A large part of why this approach is so successful is the market leading scope of data users can collect with GrasPro and the collaboration process with tournament stakeholders who can also access and review the information.

GrasPro has been used continuously in the build-up to the men's 2022 World Cup in Qatar and multiple other age-group tournaments that have been rearranged due to the COVID-19 pandemic.

The Stats Behind Hosting a FIFA Tournament

FIFA's use of the system has extended to more than just pitch performance, with the data collected being used to make major infrastructure decisions for future sports events. A standout case of this is using the system to demonstrate the advantages of hybrid stitched pitches to lower the tournament footprint and reduce overall costs.

Alan explains: "What we've done with GrasPro is taken the data we have and use it to inform our decisions during tournaments and for future tournaments. We use the in-depth agronomic analysis and compare the maintenance effectiveness to enhance our decision making, and because the information is available to all the tournament stakeholders, it makes it very easy to discuss and illustrate any plans we have.

"If you take the U17 event in Brazil as an example. We had to demonstrate to the wider FIFA team that we could lower the tournament footprint by using fewer stadia to host more games, and in this case, we were able to reduce it from six to four. The way I saw us achieving that was by using stitched pitches. By doing so, we reduced transportation and lowered hotel costs, which led to financial savings and resulted in higher quality pitches for the players.

"In Brazil, we had four stadia, and we stitched two pitches and left two unstitched to assess the performance of the stitched against the unstitched. The Estadio Bezaro in Brasilia hosted 18 group games over 23 days, and on many days the games were doubleheaders. This was compared to the non-stitched in Estadio Olimpico in Goiania, which only hosted ten games in the same period, but the pitch started to suffer after games seven and eight. By using GrasPro to collect data on the pitch performance and condition after and between games, we could clearly demonstrate to our FIFA colleagues that the KPIs were being met after several matches, and the stitched approach has now been taken on.

"It's at moments like this where having the data can be invaluable because it helps to facilitate fundamental changes by confirming a new approach works.

"It's a decision that helps us make the most of current pitch technology, but it also brings greater consistency for the players because they will play on the same quality surface throughout whilst having to travel less."

As part of setting pitch performance standards, a method of benchmarking the players' feedback on the match pitches was requested by FIFA. The GrasPro team was given several KPIs to consider and build into a quick and easy-to-use mobile-friendly programme, culminating in the GrasPro Player Perception.

This has been a crucial missing link between preparation and performance on both cool and warm-season surfaces, and Alan aims to use this data to optimise pitches for performance and player welfare.

"Any successful business has to listen to their customers, and our customers are the players," Alan explains. "The GrasPro Player Perception is their customer satisfaction survey.

"It will vary from country to country and account for the nuances of each climate, so it will become an invaluable asset for tournaments anywhere in the world. We aim to build a bank of data in cool and warm-season climates, and we want to keep building this data and analyse it to make sure we move in line with the modern-day game.

"The player survey is the only means we have of assessing if the pitches meet the players and coaches' expectations. It's also tied in with FIFA Medical to make sure it's not contributing to injuries. FIFA medical assess all the player injuries, so we can compare any trends they find with the information we have and then further compare that to what the players think.

"We may find that older age groups prefer the pitches to be a touch softer whereas the younger ones may prefer it harder and faster - but without the feedback from them, we'll never know that.

"By using GrasPro Player Perception, we are generating a much greater understanding of what is best for preventing injuries during intense tournaments and what the players value most.

"Ultimately, it gives everyone a benchmark to work and aim towards. We set the standards and a plan to achieve them, and with the data to hand wherever I am in the world, I can make decisions instantly. We're into our third year of using GrasPro now, and I base everything I do on the analysis we get from the system. It's proven to deliver value for us."

*no of times every tournament someone stepped onto a stadia or training pitch to play, practice, rehearse for a ceremony or work on preparation of the tournament.