7 The Dukes of Charterhouse 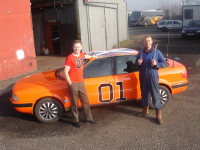 Charterhouse Turf Machinery will prove that their expertise extends way beyond turf when employees Richard Heywood and Curtis Allen take part in The Crumball Rally, a four day European race from Boulogne to Nice via Strasbourg and Lake Como.

The pair, along with their friend Steven McGill the mechanic amongst them, take to the asphalt in April under the banner of 'The Dukes of Scotland'.

The rules state that each of the 80 cars competing has to be at least 15 years old and cost no more than £200. Each team has to theme their car, and inspiration for 'The Dukes of Scotland's' Audi 80 came from the General Lee that featured in the original 1970's TV show, The Dukes of Hazard. "We really wanted to get the authentic feel of the General Lee", comments Richard, "we went for a full-on bright orange paint job and a Scottish flag emblazoned on the roof as opposed to the original Confederate flag".

But there is more to the trip than just painting and customising their chosen banger. The boys are doing the race in aid of The Beanfeast Charity for Children that supports The Scottish Society for Autism.

Richard again, "The whole thing has been a real challenge so far, from getting the car ready to planning the route but we are really getting into the spirit of it now. The Clippens School, who we are racing for, are really excited about the Rally, and will be following us at every mile because we have had a tracker fitted to the car. They will have a little toy replica of 'The General Crumb' and will move it along a map in their Geography lessons as the information is fed back to the teacher.

To help The Dukes reach their goal of £1,000 gift aid go to www.justgiving.com/dukesofscotland