by Peter Britton
in Conservation & Ecology
on 22 Aug 2014

0 Ecology - facts to suit the evidence?

As long ago as 1970, when Joni Mitchell's song Big Yellow Taxi urged farmers to "give me spots on my apples, but leave me the birds and the bees, please!" I have had concerns for environmental and conservation matters. Indeed, in a previous life, I earned my living as a wildlife artist and worked closely with a number of environmental agencies of the time.

Back then, the environmental concerns were DDT - part of the subject matter of Joni's song - oil pollution at sea, the decline of birds of prey, rain forest destruction and half-baked architectural schemes threatening to engulf our green and pleasant land. Myxomatosis had all but wiped out the rabbit population - part of the reason for the decline in birds of prey - although gamekeepers were still prone to blasting them out of the sky to protect their 'livelihood' - and badger baiting and gassing was rife. There also remained the distinct possibility that the Cold War might result in the annihilation the planet at any time!

Fast forward almost fifty years and what has changed? On a global scale, climate change is the 'buzz' topic, and has been for twenty-odd years, whilst the decline in the bee population is of obvious and real concern. Without our pollinators we are in serious trouble, are we not?

The once rare buzzard can now be found nationwide, Red kites can be seen across much of the country, peregrines have taken to nesting in inner cities and kestrels can be observed hunting along the sides of those 'blots on the landscape' (as reported in the sixties); motorways.

Badgers now require culling to reduce bovine tuberculosis (allegedly), whilst reintroduced wild boar have reached nuisance proportions and pose a serious danger to children and dogs. And there's talk of reintroducing the European Wolf to Scotland because they once lived there! Is it me, or is that just a step too far?

The reasoning is that their reintroduction will reduce deer numbers by as much as 50%. Is that until the population is decimated to the point we have to reintroduce deer to Scotland? And, if there are that many deer, then why not put them on the table to ease the food shortage, along with horse, donkey and anything else that tastes a good deal better than a Peperami?

The spots on my apples have disappeared, it seems for good, along with any semblance of flavour, whilst staples such as the gooseberry and rhubarb have, pretty much, been consigned to the Women's Institute autumn bring and buy sale in favour of more exotic fruits. Yes, I know rhubarb is technically a vegetable, but I'm taking the American stance where they deemed it a fruit in a court of law! God bless the tomato!

Of course, if the EU get their way with a blanket pesticide ban, then spotty, maggot ridden apples may well make a return. Personally, I would welcome that, although I'm not so sure Tesco would agree!

I read recently that Oxfam Analysis (didn't know there was such a thing) reckon that climate change will be responsible for a 20% rise in the cost of our favourite breakfast cereals by 2030. That's a rather bold statement, given that economic vagaries may well account for a 20% rise over a fifteen year period anyway but, of course, the analysts can say, "see, we told you so".

I know, for a fact, that my favourite light meal on toast - mackerel fillets in tomato sauce - has gone up by over 100% in the past six years. Why did no analyst warn me of that? 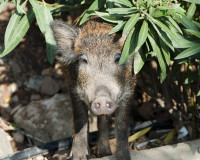 The words that analysts, scientists and the like prefer to use are 'could', 'might' and 'likely'. Take the Oxfam 'Standing on the Sidelines' report as an example. It states: "If left unchecked, the effects of climate change on basic crops - like rice, wheat, and corn - could drive up the cost of Kellogg's Frosted Flakes in the US by up to 20% by 2030. Corn Flakes could also rise up to 30% in the US, and up to 44% in the UK."

Oxfam goes on to blame the 'Big 10' food and beverage companies for not doing enough to combat climate change by "cutting emissions from their agricultural supply chains and lobbying for governmental action."

Oxfam argue that global warming is already having an impact on the American breakfast table. "In rich countries, at the moment, we are starting to see the impacts in people's pockets, having to pay more for the products that they are used to consuming on a daily basis," said Oxfam's Tim Gore, one of the report's authors. Isn't that perhaps ignoring the global economic crisis as a major contributory factor to the people's pocket power?

Additionally, another recent scientific study claimed that; "frequent adverse weather events may threaten the future of wheat yields in Europe by 2060", going on to state; "despite large uncertainty in climate projections, modelling predicts an increase in probability of adverse weather events, which may affect wheat production across Europe." Sorry, but isn't that just gobbledegook?

The EU's Chief Scientific Advisor, Anne Glover, recently stated that facts were being twisted to fit political agenda. "What happens at the moment - whether it's in Commission, Parliament or Council - is that, time and time again, if people don't like what's being proposed, what they say is that there is something wrong with the evidence. So everybody blames the evidence and nobody is honest about the fact that, in many cases, understanding the evidence is the best possible platform to make the logical extension into policy. But they don't like it so they say 'We need more evidence'. And, of course, scientists can always produce more evidence." Read full article HERE

Those are strong words from someone in a position of authority within the EU, and a refreshing change from the spiel that is normally wheeled out for public consumption. Ms Glover's observations suggest the reasons why there are believers and non-believers when it comes to climate change, i.e. facts to suit the politics as opposed to a gut feeling that change is cyclical, with very little middle ground.

Closer to home, whilst the increase in birds of prey is welcomed, there is genuine concern for our smaller birds. Perhaps the case of the collared dove is worth considering. This attractive bird first bred in the UK in 1956 and its numbers soared to a point where it was one of the UK's most common birds. However, since the turn of the century, their numbers have begun to decline for no apparent reason. 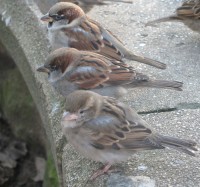 Similarly, once common birds, such as the house sparrow and starling, have seen their numbers plummet to a point where they are on the RSPB's red list. In the case of the house sparrow, their numbers are increasing further north; a suggestion, perhaps, that climate change, or warmer temperatures at least, is the cause. Certainly, more and more continental species are being seen along the south coast, which suggests a range shift northward.

Butterflies that once bred only in the south are now being seen as far north as Yorkshire, with some changing their egg laying and feeding preferences on the way.

There is a serious proposal on the table to utilise goats to keep invasive plant species - such as Japanese Knotweed and Giant Hogweed - under control. As these bovines will eat almost anything, it sounds like a good plan; even more so if they are killed for the pot at the end of their useful lives!

Now, please don't get all Linda McCartney on me. After all, there's nothing much cuter than a lamb, piglet or calf, and look what happens to them!

A few issues ago, we reported on a new build cricket ground where, during the course of excavations, Great Crested Newts were found to habit a small pond close by. Being dutiful, the club reported the find and were subsequently ordered to find an additional £25,000 to cover the cost of a purpose built newt run and protective fence. Is that conservation gone mad? To be honest, I don't know, but some might suggest that £25K could be better spent on human requirements.

I regularly catch the train from the south coast up to our head office in Shropshire and, apart from the urban conurbations of Southampton, Basingstoke, Reading, Birmingham and Wolverhampton, the view out of the window is generally rural. It is a landscape of fields, trees, woodland, streams, ponds, rivers and estuaries. The keen eye can spot all manner of wildlife on the journey, although Great Crested Newts have proved evasive! My question here is, have conservationists covered every inch of these vast tracts of rural land? Indeed, have they done similar in the urban environment? It may well be that a huge population of newts is living on the outskirts of Wolverhampton, undiscovered and untroubled by modern life.

More than 600 new species have been discovered in Madagascar's unique habitats in the past decade, according to a report published by WWF; amongst them 385 plants, forty-two invertebrates, seventeen fish, sixty-nine amphibians, sixty-one reptiles and forty-one mammals.

New species discovered this year alone include the Kaweesak's Dragon Tree; it was found in the limestone mountains of Thailand and grows to a height of forty feet - a bit difficult to miss, you might think! The Olinguito is the first new carnivorous mammal described in the Western Hemisphere in thirty-five years, according to the International Institute for Species Exploration, and is threatened by its dependence on "cloud forest" habitat of the Andes. It belongs to the same family as the raccoon, but is described as looking like a cross between a cat and a teddy bear. Others include the Domed Land Snail of Croatia, the Leaf-tailed Gecko from Australia and the Tinkerbell Fairy Fly, a tiny wasp from Costa Rica.

Stuart Roberts, who is chair of the Bees, Wasps and Ants Recording Society (BWARS), and has been collating records for the Bumblebee Conservation Trust, said the organisation had received a record number of sightings of the tree bumblebee in 2013 and 2014. "The colonisation and spread of this beautiful bee has been extremely rapid," he said. "They are first-class pollinators."

In continental Europe, it sits side by side with many species found in the UK and is likely to be filling a niche in our eco-system.

So, Mother Nature continues to tweak her environment. She has made some interesting decisions in her time, and continues to do so.

It is true to say that she probably needs help from we humans, and there have been successes in some areas. Yet, the planet is changing; disappearing bees, melting ice caps, deforestation and fossil fuels are some of the top priorities.

I certainly don't have any answers, but remain genuinely concerned, not only for the environment, but also that the politics of conservation and all things green might sometimes be cause rather than effect.