0 The End of Coring? 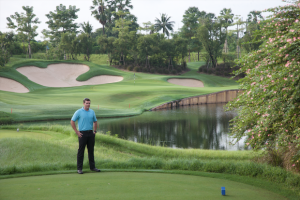 Brad Revill is a result of The Ohio Program, an enquiring mind and hard work. Currently Director of Golf Course Maintenance at Nikanti Golf Club in Bangkok, he has worked all over the world from Australia to America and Brunei

Organic matter management. Probably one of, if not the most important aspect of our role as turf managers in consistently maintaining high performing playing surfaces.

Do we need to core greens? Can we manage organic matter with sand topdressing and the use of solid tines only? How much sand is needed and how often do we need to apply?

It is these questions I often ponder on my one to two hour daily commute home from work each evening. Over the last six months, I have taken advantage of this commute time to listen to all the podcasts from TurfNet Radio and, in particular, Frank Rossi's "Frankly Speaking" episodes. If you haven't yet discovered the TurfNet Radio podcasts, I highly recommend them.

It was one of these episodes in particular, with Frank and guest Dr. Roch Goussoin, who was the head of the Agronomy Department at the University of Nebraska, talking about managing organic matter in fine turf, that first opened my eyes to at least the possibility that we didn't need to core! A possibility that I would never have thought of before, as it is ingrained into us that we core aerify and topdress in the spring and autumn to control organic matter build up and relieve compaction, amongst other benefits.

Dr. Roch discusses the survey that they conducted in seventeen states and on over 200 golf courses, over almost three years, in an attempt to identify which greens consistently had the lowest organic matter and why. He explains that the results show that, for all the greens that were surveyed, the dominating factor for the greens that had the lowest organic matter percentage was the amount of sand applied over the growing season, not necessarily if they cored or didn't core, or how frequently or aggressively they pulled a core, but the amount of sand applied followed by the frequency in which they topdressed. 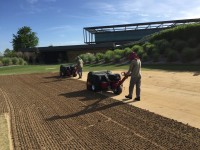 Dr. Roch then conducted a two year study to determine if the way you make a hole matters, and if it was possible to manage organic matter with topdressing only. All test plots (180 altogether!) received the same amount of topdressing sand with different cultivation techniques, including coring, no coring, solid tining, bayonet tines, planet air, hydrojecting and also looked at greens of different ages.

He then goes on to say; "we basically proved that core aerification does not lower organic matter any more than not pulling a core or using a solid tine."

Wow! This made me start to question everything we were doing in regards to managing organic matter. This theory was further backed up by Dr. Norm Hummel in another episode with Dr. Frank Rossi, titled 'Aerating and Topdressing High Performance Putting Surfaces'. Micah Woods also has some interesting thoughts on managing organic matter and biomass in his blog.

Great, so was there anyone who has actually had any success trialing this approach? Luckily enough, Chris Tritabaugh, the Superintendent at Hazeltine National and recent host of the Ryder Cup, talks about his management techniques in this episode and the fact that he has not pulled a core since August 2013! He only uses deep solid tines, needle tines and dryjecting, in combination with regular topdressing through the growing season, to manage organic matter. I think it's safe to say that nobody was questioning the quality of surfaces that were presented for that event!

I also read an article titled "Unconventional wisdom" in the January 2017 GCM Magazine, where Jamie Kizer who was the Superintendent at Hidden Falls GC, Texas had only core aerified his greens once in the past seven years. He utilises a biological approach, brewing and applying compost teas to stimulate microbial activity in the soil, combined with the use of the Air2G2 machine to inject air directly into the soil profile once per month to further stimulate the microbes and digest the organic material. 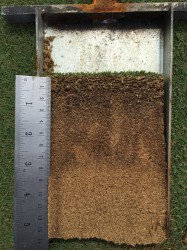 So is this the end of coring? I personally think there will always be a place for core aerification as a tool for compaction relief and to remove excessive organic matter in combination with machines like the Graden. But, once we have that excessive organic matter removed, it makes sense to me that we should be able to keep it sufficiently diluted with regular sand topdressing, solid tining and/or in combination with a biological programme and Air2G2 machine.

We do not have an Air2G2 at Nikanti Golf Club but, with our last core aerification in June 2016 and average OM% sitting at 1.2% (Nov. 2016) in our four year old greens, we will definitely be testing the topdressing and solid tining approach moving forward.

This OM% figure is taken from a sample depth of 100mm when we do our regular soil fertility testing. I would like to send some samples away in the next month that are taken from the top 5cm of the soil, which I think will be much more relavent.

It was my hope to present you with some data on our cultural practices, fertiliser applications and performance data in this post, but I admit I have not finished compiling the 2016 data. This just means you will be hearing from me again on this matter very soon. I will leave you with a quote from my first boss and Superintendent at Bermagui Country Club, David Thomson, which will stick with me forever; "when we stop evaluating everything we practise, that's the time to leave the trade."