In May of 2011, the Federal Bureau of Investigation released a list of the ten most dangerous cities in the United States. Flint, Michigan topped this list, as the number of violent crimes had increased between 2009 and 2010.

During this same time period, a team of Michigan State University (MSU) researchers initiated an experiment in Flint, to gather data on the social, economic and environmental impact of turfgrass on an urban society.

In the spring of 2010, MSU began maintaining areas around abandoned homes, vacant lots and parks by mowing weekly on sites that had rarely or never been mown. Additionally, fertiliser applications were made several times a year, along with an annual herbicide application.

So, what is the purpose behind the research? Well, more often than not, turfgrass is viewed as either an ornamental or recreational plant. The Flint Turfgrass Project was designed to consider the functional impacts turfgrass can have on a community. 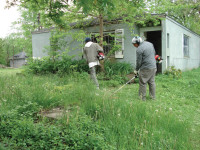 Everris is funding the project ($150,000 over three years) whilst donating fertiliser and seed, with John Deere donating nine walk behind lawn mowers and a Z-Trak commercial mower.

MSU Sociologist, Stephen Gasteyer Ph.D., was asked to track the social changes in the neighbourhood as a result of the turfgrass project. He began by conducting an assessment of community assets and issues at a monthly neighbourhood association meeting.

According to the residents, Ramona Park was one of the neighbourhood's greatest assets as a potential community green space. A neighbourhood master plan envisioned the park as a centrepiece to a safer and revitalised area. However, residents knew that, with the current state of the park and the amount of crime in the area, they were far from reaching their community goals. The fact was, in the autumn of 2009, Ramona Park was essentially abandoned, and most residents would not even consider stepping a foot into it.

I was introduced to Ramona Park in the autumn of 2009 and, whilst the park had recently been mowed, clippings remained to rot atop laid-over vegetation, making the park difficult to walk through and impossible to play in. 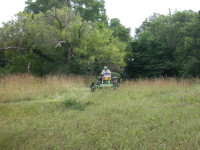 The first time I showed up to mow the park, in the early spring of 2010, a pitbull dog carcass was in my path, the apparent discarded loser of an illegal dogfight. I admit I was a bit intimidated and a little frightened in my new work environment.

Prior to initiating the study, the area had to be cleaned up, which took community involvement. In other words, I had no intention of clearing abandoned mattresses and years of discarded waste that dotted the site.

Enter David Caswell, a retired principle, who has lived in the area for the past forty-three years. He successfully encouraged residents to get involved in the project. "It was the most ragged piece of land you ever saw in your life," Mr. Caswell recently told a State News reporter and continued; "People thought nothing would come of it. They'd look at it and say, why bother? But, by putting the project in there and working hard, we were able to take an eyesore and turn it into a really lovely landscape."

In the spring of 2010, we began to notice there was less litter to pick up. 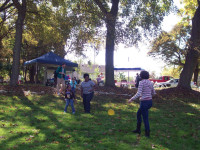 At this time, MSU research assistant Jeff Bryan was approached by David Alston, a resident who took it upon himself to start picking up the trash prior to our arrival on Wednesday mornings (our normal mowing day). David asked us if we could give him some garbage bags to make his job easier, and we were happy to oblige. He did not stop with litter pick-up either, as he also filled fifteen bags with sticks and fallen tree limbs.

By mid-summer, I added David to my payroll (something about spying him sweeping dirt up from the kerb made me feel evil to not include him as a paid member of the team). In September, David informed me, "There is not as much trash to pick-up anymore. Seems like people are noticing we are taking care of this place and they are gaining a little pride. It's contagious."

On 24 September, 2011, the community held a party in Ramona Park. Residents set up games for children to play, and invited any passers by to drop in for a free meal. Additionally, children that participated in games won pencils, pens, notebooks and other school supplies generously donated by the Michigan Turfgrass Foundation. 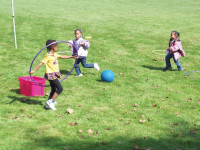 I had been informed of a birthday party taking place in the park, and that groups held weekly meetings there but, since I was generally only there on a weekday morning, the only person I ever observed in the park was a middle-aged guy playing fetch with his dog.

I decided to drop in on the Ramona Park party and see the action for myself. Other MSU colleagues also dropped by. The party was a success due to the great turnout. Some residents even invited a group of young adults, known to cause trouble in the neighbourhood, over for some food and conversation. In essence, the maintained green space created an area to hold a party, which brought together people who might not otherwise have an outlet for positive communication.

The tone of the resident's discussion of the park has changed dramatically since the beginning of the turfgrass project. In addition to the positive attendance and outcome of the park party, residents have shared how pleased they are about the changes to the park, both in terms of its aesthetic appeal and increased feelings of safety. 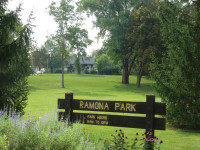 Cleaning, clearing and mowing has literally opened it up for the residents to better keep an eye on their neighbourhood, an important feat in the United States most dangerous city.

In discussing park party outcomes, the neighbourhood association leader expressed how happy she was about the turfgrass project. "I thought the park looked beautiful, and I am so proud of our work with MSU. It's looking good. Really looking good in the neighborhood."

Prior to initiating the Flint project, I was interviewed by the Associated Press. I stated that I had hoped to, one day, see children playing frisbee in Ramona Park. At least one reader took exception to my comment, as he posted online that I was an idiot if I thought kids playing frisbee in the park would solve Flint's problems. Well, when I went to the Ramona Park party in September, kids were playing frisbee in the park. I even played with them. Hungry people were invited to a free meal, and had a chance to meet their neighbours, which strengthened a sense of security. Kids were given school supplies.

Turfgrass and frisbees will not cure all of Flint's problems, but it is a start. Initial data suggests that the project is increasing the quality of life in the neighbourhood, and that is something that makes a difference. Turfgrass can make magic.