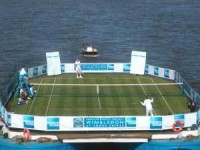 Sorry about the relative paucity of new articles over the last couple of days. There is an explanation, as Londoners and tourists to the capital witnessed yesterday.

Floating down the Thames was a grass tennis court, with former stars John McEnroe and Monica Seles on board playing an exhibition match.

The tennis court was constructed under the guidance of Pitchcare, and was commissioned by American Express as a promotional exercise during this last week of Wimbledon. The tennis court was built on a pontoon at the Docklands over the weekend ready for the launch on Monday, so most of the Pitchcare team were in attendance to witness this unique event.

Full details of the construction, and the problems encountered, will appear on the site in the next few days.

Also, as part of the American Express promotion, Pitchcare have overseen the building of a full size court on a site adjacent to Tower Bridge. This will be used for an exhibition game, again starring McEnroe and Seles and other celebrities, to be held tomorrow (Wednesday 30th June).

So, if you are in London, pop along and see what is going on.

Again, we will bring you details of the construction and disposal of the court in the coming days.