Knowledge and understanding of soil physical properties has always been important for professional turf managers when making decisions about maintenance operations and when carrying out reconstruction works. Precise soil knowledge, including information on boundaries between soil types, should result in more accurate use of fertilisers, pesticides and effective management practices, thus ensuring that the final managed outputs result in the production of economically safe, consistent, playable natural sports turf surfaces.

Soils can vary in many ways, both physically and chemically on a local or regional scale. Many factors, including original parent material source, climate, weathering processes, topography or history of the land use influence their properties. This soil variability gives rise to all the different soil types universally classified by soil texture composition. Soil composition (soil texture) is determined predominantly by mineral particles and organic matter content and can be classified by the percentage of sand, silt and clay mineral particle content. Understanding soil properties is the key to good groundsmanship.

A recent article about how farmers have eroded soil properties with intensive farming strategies reminds us how precious our soils are.

Intensive over-farming in the UK has depleted the soil of the nutrients needed to grow crops meaning that we only have 100 harvests left unless dramatic action is taken, scientists at the University of Sheffield have revealed. At the same time, lack of bio-diversity is causing a dramatic fall in wildlife populations in this country. 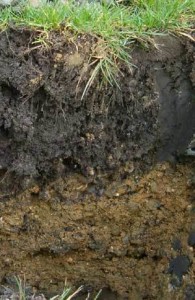 In order to ensure future generations are able to grow fruit and vegetables, we should start to see our towns and cities as potential farmyards. Growing crops and wildflowers in our cities will also boost bio-diversity and help wildlife.

A recent study by Dr Jill Edmondson from the University of Sheffield's Department of Animal and Plant Sciences, found that soils under Britain's allotments are significantly healthier than soils that have been intensively farmed. In the study, Dr Edmondson took soil samples from 27 plots on 15 allotment sites in urban areas. She also sampled soils from local parks, gardens and surrounding agricultural land. Compared with local arable fields, the allotment soil was found to be significantly healthier. Allotment soil had 32% more organic carbon, 36% higher carbon to nitrogen ratios, 25% higher nitrogen and was significantly less compacted.

While urban areas are perceived as grey and concrete, pockets of rich, fertile land could be converted into farms to grow a diverse range of produce. Inner-city wildflower meadows can increase wildlife and bring colour and vibrancy to otherwise drab areas.

One such scheme has been proposed by Professor Nigel Dunnett of the University of Sheffield who plans to transform a piece of wasteland in the centre of Sheffield into an eco-park filled with UK native wildflowers. Love Square in Sheffield will be a unique "mobile wilderness" bringing nature right back into the heart of the city.

The University of Sheffield's Love Square scheme is one of five projects shortlisted for the chance to win cash from the Big Lottery Fund through the Grow Wild initiative, led by the Royal Botanic Gardens in Kew, with the winner chosen by public vote.

The Love Square scheme is intended to act as a template for other cities and represents a new approach to urban growing. The 2,000 square metre site will feature a series of modules each containing different types of wildflowers and edible plants. The moveable modules mean that the site can be easily replicated, re-mixed, changed or moved to other parts of the city, creating a unique and versatile space.

Lack of bio-diversity in city centres has had a serious impact on wildlife in recent decades. Since the 1930s, the UK has lost 97% of its wildflower meadows, resulting in dramatic reductions in the populations of bees and other insects. The UK's honey bee population has halved in the last twenty five years, while three quarters of butterfly species and two thirds of moth species have seen their populations decline during the same period.

Nigel Dunnett, University of Sheffield said: "With a growing population to feed, and the nutrients in our soil in sharp decline, we may soon see an agricultural crisis. Meanwhile we are also seeing a sharp decrease in bio-diversity in the UK which has a disastrous knock-on effect on our wildlife. Lack of pollinators means reduction in food. We need to dramatically rethink our approach to urban growing and use the little space we have as efficiently as possible. Cities must become places of food production. Love Square shows how we can make beautiful and productive places, rich in wildlife, and great for people, in the very heart of our cities."

Supported by the Big Lottery Fund and led by Royal Botanic Gardens, Kew, Grow Wild inspires communities, friends, neighbours and individuals across the UK to come together to transform local spaces, by sowing, growing and enjoying native wild flowers.

The winning site will be chosen by a public vote. Voting takes place online and by telephone from 8am until November 4.