Having Blackpool's manager, Ian Holloway, in the Premier league, for at least a season, is bound to be 'interesting'. His honest appraisals and slightly off-the-wall comments have made him somewhat of a legend in the lower leagues, and he joins the likes of Redknapp and McCarthy to, hopefully, put some commonsense (or should that be nonsense?) ahead of the usual rhetoric.

The history of the club can be traced back to 1877 when Victoria Football Club was founded. Ten years later, after a dispute amongst the players, it was renamed Blackpool Football Club. One year later, the club became founder members of the Lancashire League and enjoyed eight successful seasons, culminating in the winning of the championship in 1893-94, after being pipped on goal average by Liverpool the previous season. 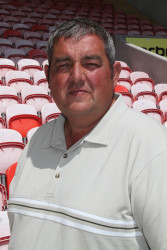 Players of note have included England internationals Jimmy Armfield, Stan Mortensen, Stanley Matthews and Alan Ball, the latter being the only Blackpool player to play in a World Cup. When he was transferred to Everton in 1966 for £112,000 it was, at the time, a record fee between two English clubs.

Notable successes have been few, with an FA Cup win in 1953 their only major trophy. However, promotion to the Premiership this year ranks as a major achievement, one that Ian Holloway believes has written the current squad of players into the club's folklore. Certainly, with the likes of Manchester United, Chelsea and age old rivals Liverpool visiting the Bloomfield Road stadium this season, every game will seem like a cup final. As Holloway put it, "the future's bright, the future's orange" in reference to the club's colours.

Looking after the 'Seasiders' facilities is Head Groundsman, Stan Raby, who says he is relishing the challenge of preparing pitches for the Premiership. Stan, previously a farmer, joined the club five years ago. He has one assistant, Alex Reeves, and one summer season helper, Connor Cross, who is currently studying at Myerscough College. Between them they look after both the stadium pitch and training ground pitches. A number of volunteers have been trained up to help on match days.

Stan has not been able to rest on his laurels since the club gained promotion. He was busy organising and overseeing the end of season renovations, and enduring quite a bit of upheaval whilst a new, temporary stand was being built in readiness for the Premiership games, taking the capacity up from 12,000 to 17,000, still small by top flight standards. 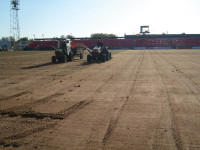 His last game on the pitch was in late May, leaving him little over seven weeks before the first competitive match, a Network Rail rugby cup final between Widnes Vikings and Batley Bulldogs on 18th July. The first home football match on the pitch was played against Hibernian on 8th August with the first Premiership game on 28th August against Fulham.

Stan likes to undertake a lot of the work himself. Having been a farmer for many years, he is very experienced in the use of tractors and implements. His aim is to reduce dependency on contract machinery and carry out essential maintenance and renovation work in-house.

With this in mind, Stan has built up a healthy stock of equipment, purchased through Campey Turf Care Systems, and the club now own their own Koro Field Topmaker, Muratori power harrow, 1.8m Reist Aeraseeder, Charterhouse Verti-Drain, Raycam Sports Field Harrows, a New Holland TC27 tractor and a Landquip Sprayer to help renovate the pitches themselves. "We have saved a considerable sum by investing in our own equipment," said Stan. "Not only does it give us the flexibility to control our own maintenance and renovation programme, but we can get the work completed faster by having everything on site. We know the investment will be paid back within three to four years." 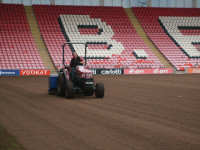 This year, Stan enlisted the help of contractor, Derek Crane, to help him carry out the work at both the training ground and stadium. Work began on the training ground on 17th May. Both the pitch and a small training area were koroed, power harrowed and topdressed with 150 tonne of sand before being oversown with Johnsons Premier grass seed.

A new Rain Bird pop up watering system was also commissioned this year, giving better control over watering requirements. This consisted of a fully automated, thirty-two head system connected to the mains. There are twenty-four heads around the
perimeter, with eight set in the playing area.

Work on the stadium pitch commenced on May 30th. Vegetation was koroed off, leaving a clean profile to be power harrowed, levelled and topdressed. 90 tonnes of new Fibresand was added to the pitch to improve the density of the fibre in the top 100mm, which was then oversown with Johnson's Premier.

A Dennis G860 cassette mower is used on the stadium pitch for final preparation. Four Asuka pedestrian rotaries are used to mow and clean up the pitch before and after matches. The pitch is maintained at around 27mm.

At the training ground, trailed gang mowers and a Trimax Pro-Cut rotary are used. On the day of my visit, Stan was out on the stadium pitch taking a number of soil samples with Gary Potter, ALS Sales Manager, to ascertain the nutrient status of the pitch. The new seed had been up for several days and was looking good, awaiting its first cut with the rotaries.

Gary sends the soil samples off to ETT Laboratories for testing, to ensure that Stan has a clear understanding of what the pitch needs in terms of NPK and trace elements. In this instance, the results showed a deficiency in both potassium and potash, which was addressed with an appropriate dose of NPK to bring the feeding programme up to speed. The pitch will receive several feeds during the peak growing season, both granular and liquid.

At this point in time, Stan is unsure how the temporary stand will affect grass growth but, like many stadiums, the pitch already suffers because of shade when the sun is low and soil temperatures drop, so it is a situation that he is able to cope with. He remains confident that he can deliver the quality playing surface required for Blackpool's excursion into the best football league in the world.

I would like to wish Stan and his assistant Alex all the best, and hope they enjoy their time preparing their playing surfaces for some of the world's best players. 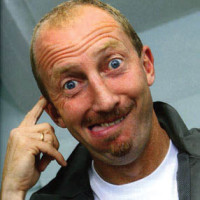 "Right now, everything is going wrong for me - if I fell in a barrel of boobs, I'd come out sucking my thumb!"

"Some weeks the lady is good looking and some weeks they're not. Our performance today would have been not the best looking bird, but at least we got her in the taxi."

She may not have been the best looking lady we ended up taking home but it was still very pleasant and very nice, so thanks very much and let's have coffee."

"When my mum was running our house, when I was a kid, all the money was put into tins. She knew what was in every tin and I know how much I've got in my tin - that's the way we'll run this club."

"I feel a bit like the nanny who is trying to calm down the kids."

"When their man was sent off, it seemed to wake up the crowd and give them someone to get their teeth into and, fortunately for us, that was the referee."

"There was a spell in the second half when I took my heart off my sleeve and put it in my mouth."

"I've got to get Dan Shittu ready for the Stoke game. I've told him to go to Iceland and ask if he can sit in one of their freezers."

"Apparently it's my fault that the Titanic sank."

"It's all very well having a great pianist playing, but it's no good if you haven't got anyone to get the piano on the stage in the first place, otherwise the pianist would be standing there with no bloody piano to play."

"I am a football manager. I can't see into the future. Last year I thought I was going to Cornwall on my holidays, but I ended up going to Lyme Regis."

"You can say that strikers are very much like postmen: they have to get in and out as quick as they can before the dog starts to have a go."

"I always say that scoring goals is like driving a car. When the striker is going for goal, he's pushing down that accelerator, so the rest of the team has to come down off that clutch. If the clutch and the accelerator are down at the same time, then you are going to have an accident."

"I've got to knock that horrible smell out of my boys, because they smell of complacency."

"We need a big, ugly defender. If we had one of them we'd have dealt with the first goal by taking out the ball, the player and the first three rows of seats in the stands."

"He's six foot something, fit as a flea, good looking - he's got to have something wrong with him. Hopefully, he's hung like a hamster - that would make us all feel better. Having said that, me missus has got a pet hamster at home, and his cock's massive." - talking about Cristiano Ronaldo.