0 The gateway to Scottish golf 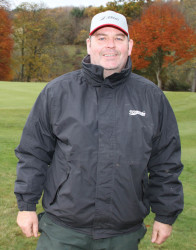 A charming Jacobean mansion doubles up as a clubhouse and a stylish hotel. Within the grounds, some three miles away, lies the Duke and Duchess's home, Floors Castle, the largest inhabited castle in Scotland. It's truly an exquisite setting.

The Duke, himself a keen golfer, commissioned former Ryder Cup player, Dave Thomas, to design the course and it opened for play following an exhibition match between Nick Faldo and Colin Montgomerie in 1997.

The course bears Thomas's hallmarks, large, well-shaped greens and deep bunkers. The Roxburghe is certainly one of his best designs, sitting nicely alongside The Belfry and San Roque in Andalucia.

There are four tee positions, ranging from 7,111 yards at the back, to a more leisurely 5,660 yards from the forward tees. The course makes good use of the natural features of the land, including the various elevation changes and the salmon rich River Teviot.

The signature hole is, undoubtedly, the 14th, a stunning par five, aptly named, 'Viaduct'. The river runs along the left hand side and a steep bank run along the right, guarding the full length of the hole, whilst the imposing viaduct watches silently on. It's a serious challenge, which belies its stroke index of 15. 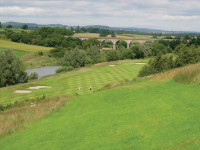 The course employs six full time greenkeeping staff, with Craig Pollock heading up the team in the role of Course Manager, a position he came to eighteen months ago.

Craig is no stranger to managing demanding courses, having spent the previous seventeen years learning his art, firstly at Anstruther Golf Club, with a further seven years working on the New Golf Course at St. Andrews Links Trust. This was followed by spells at Cleveland GC, Wynyard GC and The Glen at North Berwick, which all added to the greater experience of both links and inland golf course management.

Craig is very proud of his course and, as he showed me round, he pointed out all the work that had been undertaken in his time. The site is enormous and, as well as the course features, there are a wide range of grassland and ecological areas that need appropriate maintenance.

The Duke retains a very keen interest in golf and has quite a say in the running of the course, keeping in regular contact with Craig and his staff.

Presenting the course in the best light, and ensuring the course plays well, are the key objectives of the greenkeepers. Cutting regimes are designed to achieve these goals and to ensure the grass remains in good health.

The Roxburghe has found that being a 'key account' holder with Fairways GM has enabled the down time in machines to be, at most, one day, thanks to the onsite expertise of Fairways local technician Simon Forsyth and Representative Euan Thomson. This partnership has been a real two way deal with machinery coming in when needed and the Roxburghe also giving a loan of any machines, if needed, for demonstration purposes.

Greens are cut daily to 4mm in the summer using their eleven blade Jacobsen G-Plex 3s. In winter, the height of cut is raised to 5.5mm and mowing takes place weekly or as growth demands.

The G-Plex mowers are also used to maintain the tees, keeping them at 9mm in the summer and 12mm in the winter. Collars and approaches are maintained at the same heights and cut with a seven blade triple Ransomes JacobsenTR3 cylinder mower three times a week.

Semi permanent grassland is cut twice a year to 100mm, whilst the deep rough is cut and collected once, at the end of summer, having been knocked down to 150mm.

Under the club's maintenance contract with Fairway GM, cylinders and bottom blades are sharpened and reground regularly, and Mike also has his own Hunter Juno for any unforeseen problems.

With so much regular topdressing being applied to the greens (200 tonnes), and the height of cut being at 4mm during the summer season, checking the mowers is an essential part of the weekly programme.

The USGA spec greens are large and undulating and require a balanced maintenance regime that includes the use of wetting agents, growth retardants, granular and liquid feeds, plenty of aeration, verticutting and topdressing to keep them smooth and fast. They generally run between 9.0-9.5ft on the stimpmeter during the height of the season, faster for tournaments if needed.

Craig says that Primo Maxx has been a godsend, reducing the amount of cutting required on treated areas. He uses it on the greens at a rate to stimulate tillering, but it is primarily used on tees and bunker faces to slow growth down.

A Rainbird irrigation system, with remote rain smart sensors, was installed by MJ Abbott, and the company also performs the initial start-up in March, when they also check for any faults in the system following Scotland's usually harsh winter. The winter shut down of the system is carried out by Craig and his team.

The three pumps are connected to Rainbird Stratus LT software, a PC based system controller with decoder units, which allows freedom of individual programme inputs. The irrigation water is abstracted, through licence, from the river Teviot which allows up to one hundred cubic metres per day between 1st April and 31st October. No water may be abstracted outside these dates.

During the winter months, the greens are given monthly deep aeration, alternating between the Soil Reliever and SISIS slit tiner. In between times, a BMS sarrell roller is used to keep the surfaces open, when the weather allows.

Tees and approaches receive a similar aeration programme, whilst two passes are given to the fairways.

With over seventy Thomas style bunkers to maintain, it is one of the most labour intensive jobs on the course. They are machine raked daily and cut, edged and mown in one operation every five to six weeks.

Craig undertakes the following core practices to keep the greens, tees and approaches in a good condition:

• In March, a moss killer is applied to control ingression on the greens, and this is followed by the greens being cored with 13mm hollow tines
• First feed is applied in April, with a 3:0:3 on greens, tees and approaches. This is followed by a monthly application of Mascot Breaker Advance seaweed/iron mix applied at 10lt per hectare
• Thatchaway reels are used every two to three weeks, weather permitting, along with sarrell rollers
• Primo Maxx is applied monthly to greens, tees, approaches, collars and bunker faces, tank mixed with either Mascot Microflow CX 25:0:0 or Mascot Microflow CX 17:2:5 from April onwards
• In May, a 12:3:24+Mg is applied to greens and 13:8:36 to tees
• During May, June and July the greens are aerated with 10mm solid tines to open up the surfaces followed by a light top dressing
• In August, the greens are cored with 12mm hollow tines
• In September, the greens and tees are overseeded at 20g/m2
• Mascot Ringer is applied to tees, greens surrounds, approaches and fairways for worm cast in September
• Tees are cored with 13mm tines in October
• Mascot Bioplex 6:1:12 + garlic is applied to greens as a supplement when needed, and Mascot Bioplex 3:1:3+Fe is applied as awinter feed to greens, tees and approaches
• Hand watering of high/dry spots is carried out with a hand held applicator when the first sign of dry patch becomes noticeable

Tree work is undertaken to improve the aesthetics and enrich the fauna of the course. Recent work included a major clearance operation of the 10th and 14th holes to try and open up the views to both the river Teviot and the viaduct. These areas had become overgrown with non-indigenous species which, in Craig's view, deterred from the look of the holes

Pest management is ongoing. Mole and grey squirrel trapping is undertaken by staff to keep the vermin counts low. Moles are trapped as soon as they start to become active. All vermin are humanely dealt with.

It would seem that Craig has settled in well and is getting to grips with the challenges the site provides. The course has a high reputation - it is rated fifth best inland course in Scotland and regularly appears in the top 100 courses to play in the UK. Something Craig and the Duke can be very proud of.