0 The golfing gems of Biarritz

Golf de Biarritz 'Le Phare' was the brainchild of Victorian British aristocracy who wanted to play golf whilst on holiday in the upmarket French seaside resort in the 1880s. A century later, the first international golf training centre opened, the brainchild of the French Golfing Federation (FFgolf).

The club is located on the cliff tops just outside Biarritz, completing a unique golfing experience in southwest France.

Patrice Bernard has been the Intendent du terrain (course manager) at Golf de Biarritz 'Le Phare' for the past twenty-nine years, having joined the club in 1983 from Monte Carlo Golf Club where he had been the assistant head greenkeeper for a year. He has recently retired as the chairman of AGREF, Association Greenkeeper de France, a position he held for twenty-five years.

He is steeped in the tradition of French golf and, during his early days with AGREF, was one of the prime drivers behind the introduction of the country's major trade exhibition, Green Expo, which he founded with the support of the US equipment manufacturer, Jacobsen.

Today, he is responsible for two of the most prestigious golf facilities in France; the 18 hole, 5942 metre, par 69 Le Phare course situated in the centre of the famous coastal town, and Ilbiarritz, the original national training centre of the French PGA, which features sophisticated practice facilities and a tough 9-hole course, situated at Bidart, just 3 kms from Biarritz.

The Le Phare Golf Course was laid out more than 120 years ago by the brothers Willy and Tom Dunn, and has seen significant changes over time. However, since losing its holes by the sea, numerous tree planting has taken place, which caused it to lose its links aspect. It has become an attractive parkland course, which is quite short but by no means easy. It highlights the deep rooted tradition of the origins of golf in the Basque country and can be played by golfers of all levels.

In 1887, some British residents who wanted to practise their favourite sport during their holidays decided to create a golf course on the 'plateau du Phare'. By March 1888, they had formed the British Golf Club, which was inaugurated in the presence of the Princess Frederika of Hanover and consisted of an 18 hole Le Phare course, a 9 hole course for the ladies, a croquet pitch, another for cricket, some tennis courts and clay pigeon shooting.

In 1920, the committee called on Harry S Colt, renowned course architect, to redesign the golf course. These changes added significant length and the revised design was inaugurated in February 1924. Not long afterwards, the clubhouse was altered and extended having become too small for the number of members using the facilities.

The intervention of World War II and the occupation of France by the German forces saw part of the course fronting the sea requisitioned by the German army, and the twelve holes situated in Anglet, away from the coast, were converted into 18 holes.

At the end of the conflict, the requisitioned site was very badly damaged and left in a state of disrepair before being sold off for development. Continuing the philosophy and the architectural principles of H. S. Colt, the club employs Stuart Hallett, an architect specialising in the restoration of old Colt courses, to adapt the course to the current golfing demands.

I was invited to take a partial course walk with Patrice and, as we walked down the first fairway, we began by discussing the maintenance of the golf course.

"We have a large number of rounds of golf annually at Le Phare, with 800 playing members and 17,000 visitors last year. This requires substantial maintenance to ensure that our customers play on a high standard course. Therefore, we close each facility one day every week in order to perform routine maintenance operations and use all of my seventeen staff to maximum effect, especially when it comes to aeration and topdressing.

"Because we have so many rounds, we have to be out mowing at 6.00am, ahead of the golfers. Being in the town's suburb, we are situated in a quite densely populated area and this has caused some issues with our neighbours," explains Patrice. "But, we've overcome that in the past couple years following the purchase of a new greens mower, the Eclipse 322, which has fully electric systems and only uses a small, and therefore relatively quiet, diesel engine to generate the electricity. It has really done the trick!"

"You will see that most of my equipment is from Jacobsen; we have an exclusive supplier agreement with them, and we've been relying on the services of the Ransomes Jacobsen France distributor now for many years and have an excellent working partnership with them."

With the heavy workload required of his team, I ask Patrice how he keeps them trained and fully motivated. "We are very committed to training here at Biarritz," he said. "I'm a board member of a government backed vocational training initiative, called La Commission Nationale Paritaire-Emploi and, every year, together with the course manager Claude Rousseau, we map out a training schedule for every member of staff."

My next question, as we walk the first fairway, was about his greenkeeping practices. First, I enquire about his regulation heights of cut and he confirms that the greens are cut to 2.9mm in the summer increasing to 3.4mm from mid-October to late April. Tees will be 8-9mm, fairways 11mm all year round, semi-rough at 30mm and rough at 55mm.

Topdressing is carried out little and often; deep aeration is usually undertaken in early September with heavy topdressing brushed in. Patrice's preferred option for aiding growth is soluble fertiliser. Watering is a major challenge in this part of France, so in the summer season the greens are irrigated between 11.30pm and 4.30am to ensure maximum benefit is achieved. This narrow window allows for rounds very early in the morning and very late at night.

There are seventy bunkers on the course, but they are not the only obstacles that need to be negotiated. The course has some huge natural indentations in the fairways, some of which are hidden from the tee. These have been skilfully integrated into numerous holes, thereby making the game more strategic and technical.

During July, France's oldest amateur golf tournament, the Biarritz Cup, will have taken place on the Le Phare course. This is a key event and has been taking place almost every year for over a century. Many countries will be represented and approximately 450 players will take part. This event, which lasts a week, counts towards the world amateur rankings, and its reputation is such that it regularly draws crowds of over 5,000 spectators.

"This is a very prestigious event for the club," Patrice added, "so it is vitally important that we have the course in the very best condition for the first two weeks of July. As I said earlier, we have a very special working partnership with Ransomes Jacobsen France; Laurent Proupin and his team are working with the top level clubs across France - Golf National, Evian, the Blue Green group. We use a lot of their equipment, including the new hybrid Eclipse greens mower, which was the first one in France. Their tournament support, when we hold the Biarritz Cup or the European Ladies Tour events, has always been superb."

Completing the course walk, we returned to the clubhouse to be joined by Claude Rousseau, Directeur Generale of La Societe des Golfs de Biarritz. Over a very convivial lunch, he explained the rationale behind the creation of the Ilbiarritz Golf training centre, which was our afternoon venue.

"The Ilbarritz International Golf Training Centre was designed and constructed in 1988 by the architect Pierre Thevenin. This project was conceived, following the decision by the National Technical Department within the French Golfing Federation, to revolutionise the method of golf training. It coincided with the centenary of the Le Phare golf club.

"The site, just three kilometres from the centre of Biarritz, was chosen for its beautiful location on top of the Atlantic-facing cliffs with its unique scenery. It was the first European golf training centre to be built in the same style as those in Japan and the USA. It is a fourteen hectare complex, allowing amateur or professional players to train and to perfect their short game techniques."

"It has been designed to replicate all the possible difficulties and obstacles that can be found on a golf course. There are thirteen different practice areas organised in progressive stages of difficulty and featuring different types of slopes, bunkers, water hazards, bushes and trees, plus ground variations with different types of rough and greens."

"All the practice areas are connected by a circular pathway, with some areas covered for all weather use. We also offer golf tuition of the highest standards with professional teachers from France, USA, Germany and Spain to meet the needs of our international customers. This can be for groups or individuals; those who are new to the game or for those who want to improve various aspects of their game. We also have sophisticated video equipment for analysing stance and swing. We also provide other services, such as fitting or workshops on making and repairing clubs."

Originally, the plan was to build another 18-hole course, but planning restrictions, due to environmental constraints, required a rethink. The concept was four years in the planning stage and it took a further three years to get the necessary approvals. The facility is the property of Intercommunity Syndicate, a cooperative venture between the towns of Biarritz and Bidart. From the elevated position of the clubhouse, one can admire a huge roundel with various golfing amenities dotted around the perimeter. 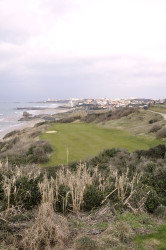 The various workstations around the training centre provide unrivalled practice facilities, from the short game to full swing, on synthetic grass or perfect turf, on flat or hilly lies, everything has been conceived to work on every aspect of a golfer's game.

"We have 45,000 visitors a year, 30,000 come to practise and around 15,000 come to play the 9-hole course," said Veronique Irigoyen, Claude Rousseau's manager for the golf course of Ilbiarritz. "It's an excellent and testing course set on two levels with an upper plateau following the cliffs and a lower section behind the cliffs. We have a free cart system to connect the two levels of the course. The signature hole is number 4, which is reminiscent of courses on the west coast of the USA, requiring a drive over a ravine between tee and green."

"At 2,176 metres, with a par of 32, the Ilbiarritz course is a hidden gem and one that pleasantly surprises many visiting golfers," adds Nathalie Larigauderie, Patrice's head greenkeeper at Ilbiarritz.

I didn't really know what to expect when I was given this assignment, but it has been a very pleasant and edifying visit to southwest France. The history of Le Phare and the vision of Ilbiarittz combine to make this an attractive golfing destination, which is maintained to the highest standards by a dedicated team of golf and turf professionals.