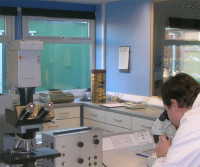 Soil micro-organisms are frequently referred to when the subject of soil is raised, but this substantial subject is seldom covered in more than superficial terms. Soil micro-organisms play a vital role in the biological processes that occur in healthy living soil.

Soil has its origins in the weathering of solid rock. Water will seep into crevices in the rock; this freezes in winter and, so, fractures the rock. Acids dissolved in rainwater (mainly carbonic acid) also break down the rock.

Once organisms are able to invade the broken down rock they accelerate the decomposition. Micro-organisms, plants and fungi secrete weak organic acids. The end result of these physical and biological processes is topsoil.

Topsoil is a blend of decomposed rock of varying particle size distribution, living organisms and humus.

However, not all of the soil's infauna is beneficial. If numbers of certain varieties of soil micro-organism increase beyond manageable numbers, then the result is a heavy infestation. Certain species consume turfgrass roots, which is a major expense for turfgrass professionals. 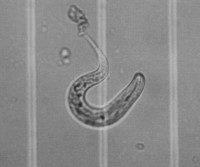 Soil contains a huge number and variety of organisms. A small spoonful of soil has in the region of five billion bacteria that cohabit with various fungi, algae and other unicellular organisms, insects, earthworms, nematodes and the roots of plants. The activities of all these organisms affect the physical and chemical characteristics of the soil, with generally lower numbers in a typical rootzone.

Nearly all of these numerous soil organisms are not only beneficial, but also absolutely essential to the life giving properties of soil. For example, the role of nitrogen fixing bacteria in converting gaseous nitrogen (N2) to ammonia (NH3) which can be absorbed by plants.

These soil micro-organisms break down a variety of organic materials and use a portion of these breakdown products to generate or synthesise a series of compounds that make up humus.

Humus is the decomposing organic material, created by the action of bacteria and fungi on dead plant and animal remains and other organic detritus. It prevents clay from packing together and develops a crumbly soil that retains water, but is still porous enough for the adequate aeration of roots. 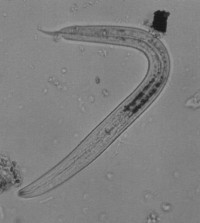 Humus also acts as a reservoir of mineral nutrients that are recycled slowly back to the soil. This process is performed by the action of soil micro-organisms.

Functions that humic substances perform include:

• increased adsorption of minerals as well as bringing into solution mineral materials that are inert, so converting them into forms that can be taken up by the plants as nutrients
• soil colour is darkened, thereby increasing the soil's adsorption of solar energy
• the water holding capacity of the soil is increased, therefore more water is available to plants for improved production
• organic compounds absorption is accelerated, which aids in plant nutrition, physiology, and in the reduction of toxins in the soil
• soil buffering capacity is increased, thereby assisting to stabilise the soil pH to assist plants uptake of minerals

There are a number of turfgrass diseases that are caused by a variety of harmful micro-organisms including fungi, moulds or nematodes. 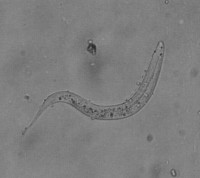 Fungi cause nearly all infectious diseases of turfgrass. It may be thought of as simple plants that lack the green pigment chlorophyll that is necessary for photosynthesis, that is to say the production of food from light, water and CO2. Therefore, the fungi must obtain their nourishment from outside resources.

Some fungi are parasitic; that is to say they feed on living plant hosts, as opposed to the saphrophytic fungi that feed on residual organic detritus.

One example would be the Fusarium fungus, that exists mainly as a saprophyte until soil conditions allow it to infect living plants, therefore becoming parasitic.

In order to prevent soil condition becoming favourable to fungi turning parasitic on turf, procedures such as improving air movement and soil drainage, and avoiding excessive fertilisation and irrigation, should help to prevent this happening. Since weather conditions cannot be controlled, the use of fungicides in addition to these measures may be employed. 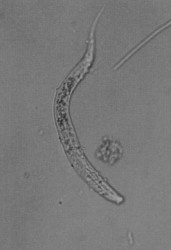 Serious threats to turfgrass roots are nematodes. Nematodes found in soil are tiny transparent worms. They average approximately 1mm in length and about 30 microns (0.030mm) in diameter, although the size range of this group is considerable.

Nematodes parasitise turfgrass roots by penetrating the plant's cells, then injecting digestive enzymes. The liquified plant tissue is then sucked out. A heavy soil infestation will severely weaken the turfgrass and leave it more susceptible to attack from other pathogenic organisms, for instance numerous species of fungus.

Symptoms of heavy nematode infestation may include leaf stunting, yellowing (chlorosis) or wilting. The roots may become stunted, branch excessively or develop scarring, galls or other deformities.

The surface effects, or the symptoms of micro-organism attack, present themselves in various forms.
As already mentioned, there can be marked chlorosis (yellowing) of the turf, or bare patches in the turf, these two examples being the more obvious symptoms.

The latter can take the form of randomly distributed patchiness or, for example, the well-known Fairy Ring, which presents itself as an irregular circle of necrotised patches of turf. This can be caused by the Marasmiacea family of fungi, amongst others such as Scleroderma spp or Hygrophorus spp. 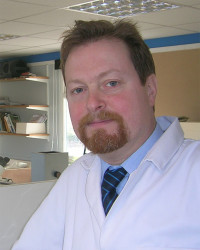 If an infestation is suspected then, before a regime of treatment with pesticides is begun, it would be prudent to first check whether this is the case by having this confirmed with a suitable soil laboratory.

The process is usually to make several glass slides of the turfgrass roots and associated soil, after first examining them with a hand lens for signs of lesions or other physical abnormalities. Microscope slides of the surrounding soil are also produced. Once these slides are labelled and fully prepared, they are examined under a microscope at different magnifications.

The images are then compared against the exemplar slides that the laboratory will have. These will be slides containing specimens of known soil pathogens. This is preferable to simply looking at an illustration, since the size of any organisms under scrutiny can be directly recorded via the graticule in the microscope, and directly compared to the exemplar specimen for morphology and size. Once identification has been established, the most appropriate course of action can then be pursued.

Nigel Fahey is the Laboratory Manager at BON Lab, if you would like to know more, contact him at lab@bonlab.co.uk