by Editor
in Industry News, People, and Machinery & Mechanics
on 20 Sep 2015 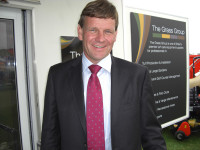 A bit of Dutch courage, coupled with some 'joie de vivre', has seen Tim Merrell build a successful business in the turfcare industry. With a portfolio of products that are widely used across all sectors, how did the company get to where it is today?

This year sees Newmarket based machinery suppliers, The Grass Group, celebrating their twenty-fifth year in the industry. The company has gone from strength to strength, expanding its range of products to meet the ever changing requirements of the industry whilst, at the same time, delivering the standards of service customers have come to expect. Through its twenty-five years, Managing Director Tim Merrell has been the backbone of the company's growth, but from where did this oak tree grow?

After graduating from Newcastle University in 1986 with a BSc Hons in Agriculture, Tim became a fully-fledged agronomist at a farm in France. The farm was reasonably equipped with machinery, but never of the right sort to do the job properly according to Tim; "they were either the wrong size or didn't have the right attachments."

So Tim started to import the relevant machinery into France from the UK - it was an instant success and the business grew quickly as more farms found out about the service. So much so that, by 1989, he had left the farm and set up a business, MJT Contracts Ltd, with a French John Deere dealer. Tim returned to the UK to spearhead the sourcing of the machinery, leaving the JD dealer to handle the delivery in France. Selling tractors, combines, diggers and then parts, they were turning over £1million within twelve months. Despite business being good, it was vulnerable to exchange rate fluctuations and other factors that could affect a solely importing operation.

It wasn't long before Tim was introduced to a turf grower who wanted a vacuum sweeper for his turf farm, and his next opportunity came along - Trilo. When someone else then approached Tim for the same product, he realised it was worth his while to investigate further and went over to Holland to look at the range. He could see the potential and, with two orders already safely under his belt, he placed the order and, in return, was appointed the official UK dealer for Trilo products. Tim has always acknowledged the help that the Trilo brothers, Cees, Louis & Leo, gave him; "the Dutch were very good to me and always have been," he says. 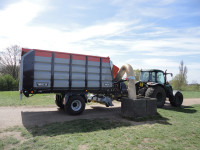 In the 1990s, 'leaves' had become 'litter', with one of the first machines being sold to Hampstead Heath - it is still in operation today, being joined by another Trilo machine in recent years. Sales were steady and turnover continued to rise, especially with the introduction of a hire market. At that time, the business was still MJT Contracts but, with Trilo UK sales and hire taking up most of the time, a split from the French end was inevitable and Trilo (UK) was launched in 1992; running somewhat parallel with MJT Contracts until being rolled into Trilo (UK) in 2005.

UK headquarters was a semi-detached, ex council house that had a very long garden and a warehouse (or shed!) at the bottom. Sales continued to grow until Tim, and wife Virginie, were up to their necks in Trilo orders. It was then, in 1998, that Tim decided he needed to employ his first Sales Executive and move to new premises with space to expand. They were lucky to find a former council farm in Newmarket, with space to store finished products as well as parts. The house doubled as their offices until they outgrew them and constructed the separate office building that you would see today.

From the outset, Tim has worked very closely with the Trilo designers in Holland to adapt existing machines for the UK market conditions. His technical expertise meant that he could identify legislation; identify the product requirements; brief the product designers; and leave them to build it. The advent of a website opened up many new markets and, at this point, Trilo UK Ltd had really taken off. The company then started to look for other complimentary products, such as mowers.

A trip to the US Golf Show brought the Canadian manufacturer Progressive to Tim's attention. Within their portfolio were some roller mowers - a new development - and Tim could again see the potential. Keen to market the range under their own name, Tim knew it couldn't be done under the Trilo banner, so The Grass Group platform was conceived in 2008. This new name provided greater flexibility and enabled further franchises to be added in the future - franchises like Tycrop topdressers that complemented the Trilo products very well. Whilst short lived, as the brand was purchased by Toro, it nevertheless positioned TGG as a company keen to research the market and bring in innovative products.

A new departure for TGG, from being just a dealer or distributor, was becoming the UK and European sales arm for Advanced Turf Technology (ATT). Impressed with Tim's knowledge of the market, ATT's managing director, John Coleman, was pleased that his unique range of fine turf management products embodied in the TMSystem™ and the 22" INFiNiCut™ mower were to be represented by The Grass Group. In the five years that have passed since they became part associated, TGG has assisted ATT in making a number of technological advances with their product line-up to meet the demands of the market.

A keenness to research the market for new products prompted the arrival of the RotaDairon brand. Tim had come across RotaDairon during his time in France, where the French manufacturer had a solid reputation. The range of overseeders, slit seeders and scarifiers combined nicely with the existing products in the TGG portfolio.

Always looking for niche products, Tim came in contact with Bob Merritt at the US Golf show. Bob is President of Ceres Turf Inc., (CTI), one of the three main US companies in the production of replacement tines and bedknives. From that contact came The Tines Shop - an online shopping portal offering the complete range from this US manufacturer, direct from the UK.

As well as technological and mechanical developments, there has been an increase in the popularity of synthetic surfaces within the industry. This has meant that machinery suppliers have had to adapt to this increase in demand for synthetic kit, The Grass Group being no different.

Last year it was announced they were taking over exclusive UK distribution of GKB Machines from the Netherlands. GKB have a range of products designed specifically for the care and maintenance of synthetic surfaces, as well as an array of machines for natural turfcare and pitch renovation. Their technically advanced equipment includes dragmats, topdressers and fraise mowers for sports surfaces, as well as aerators, brushes and cleaning equipment for artificial turf.

Not a bad start one would say - but what an act to follow for the next twenty-five years!

The TMSystem™ has become the only 'complete' turf refinement cassette system in the world with the addition of cutting reels. Today, there are ten different cassettes to transform a greens or fairway mower into a complete fine turf maintenance tool. The 'Easy-In-Easy-Out' construction of the unit chassis and the range of Turf Management cassettes gives users optimum flexibility to aerate, brush, mow, level, de-thatch and much more to achieve whatever objective.

Similarly, the pedestrian INFiNiCut™ mower is now the 22" INFiNiSystem™ being able to accept all of the TMSystem™ cassettes to go with its unique dynamic floating head mechanism.

Of major significance is the shift to being electric powered, with a dual power supply - either an engine generator or pure battery - and the introduction of a larger 26" version. For the sports turf market, TGG spearheaded the development of a new 30" version. The ability to use the new INFiNiSystem30™ as a pure electric mower means a groundsman can cut a whole football pitch for under 50p!