0 The Grass is getting greener at Perranporth GC, thanks to Barenbrug! 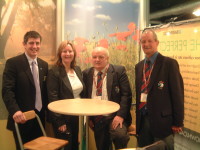 BTME provided the perfect opportunity for Barenbrug to catch up with one of its key customers - Perranporth Golf Club.

Renowned as one of Cornwall's finest Championship links courses, Perranporth was central to the development of the specialist grass seed breeder's BAR 22 all-fescue mixture after it participated in a species exchange overseeding trial in spring 2006.

Head greenkeeper Bill Mitchell says that the 18-hole course continues to reap the benefits of the programme Barenbrug's research and development manager Jayne Leyland devised as part of the trial and mixture development process.

"Avoncrop Amenity's John Palfrey introduced me to Jayne and the team at BTME 2006," Bill recalls. "I've always been keen on Barenbrug's products as I've used them before and wanted to try the then-new fescues in hope of achieving a better winter green and improved drought tolerance."

Seven mixtures were trialled across Perranporth's greens and tees, with the results from the mixture synergies sown leading directly to BAR 22's development, which features 30 per cent Hardtop hard fescue and a blend of Chewings and slender creeping red fescues, and boasts a superior winter green and drought tolerance.

Starting in spring, Bill is now set to overseed with the mixture he helped create in order to achieve full species exchange. "I was very happy with the trial results," Bill continues. "In particular, the grass held its green through the winter, which is important for golfers, and we now plan to continue the programme into the aprons and approaches."

Bill says that it's been well worth participating in the trials: "The germination and establishment is very good and the end results speak for themselves - that's why we believe the extra cost that comes with quality seed is worth it too. The ongoing support and contact from Barenbrug is also great. I retire in four years and I'm hoping that the greens will be back to full fescue by then!"

Jayne is equally delighted with the beneficial relationship Barenbrug has cultivated with Perranporth and, in particular, Bill. Having been in greenkeeping for 45 years, Bill and his team, including his deputy and brother John Mitchell, have helped transform the Cornish course to Championship standard - an achievement recently acknowledged by an 'Unsung Hero Award' presented to Bill at BTME courtesy of Terrain Aeration.

"The proof of the pudding is in the eating, as they say, and it's thanks to the willingness of customers like Bill to test new species and mixtures that we are able to develop new and innovative products," says Jayne. "Bill and his team's open-mindedness after all their years in the industry played an essential role in the development in BAR 22 and it's been an absolute pleasure to work with them."