0 The grass is greener at Trent Bridge 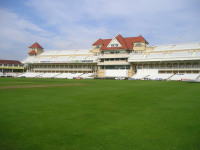 H2Pro, the wetting and water conservation agent from Scotts, more than proved its worth in last year's dry summer at Trent Bridge Cricket Ground, where head groundsman Steve Birks used it for the first time.

"In previous years, even when we irrigated the outfield, there would be nasty dry patches which looked awful," says Steve. "We knew we had a heavy schedule of high profile matches and wanted the grass to play well, and look good - for the spectators at the ground, and for all those watching on TV.

"We needed to retain as much moisture as possible in the root zone, and that's why we wanted to try a long-lasting wetting agent."

Steve applied H2Pro granules to the 1.5 hectares of outfield using a Scotts spreader at the end of May - a week before the start of a five-day Test Match against Sri Lanka.

"We watered the granules in and didn't have to wait long to see a difference," Steve admits. "By the time the first ball was bowled in the Test Match, the outfield was looking superb - a deep and even green colour, despite the continued dry weather.

"Five-day matches are particularly challenging as we can't irrigate, and we are cutting the outfield two or three times a day to maintain its speed. Keeping moisture in the sward using a product like H2Pro helped the grass cope with these difficult conditions."

A second application of H2Pro at the end of June kept the outfield looking good for the rest of the season's televised matches, including the Twenty20 Cup Final on August 20, and a One-Day International against Pakistan in September.

"The Twenty20 Cup Final is really tough on the grass," explains Steve. "Three competitive matches, half-time entertainment and fireworks all on one day, have the potential to make a real mess. But after using H2Pro the grass was much more resilient and looked fantastic before and after the Final."

And it wasn't only Steve who noticed the difference. The Sky Sports TV commentators said they had never seen Trent Bridge looking as good as it did last summer, and international cricket umpire Ian Gould was equally impressed when he was third umpire at the match against Pakistan.

Following the success last summer, Steve has decided to use H2Pro again at Trent Bridge this year.

H2Pro has been proven in development trials capable of both overcoming the problems associated with dry patch, and cutting irrigation needs by over 50 per cent. Formulated from a number of different wetting and spreading agents, H2Pro allows the maximum amount of applied water to enter the rootzone in areas previously affected by dry patch and also through the presence of long term agents, ensuring even and sustained distribution throughout the whole rooting area.

Photo Caption: Trent Bridge retained a deep and even green colour last summer, despite the drought, after Scotts' H2Pro wetting agent was applied.