by Rebecca Saunders
in Industry News
on 12 Dec 2013

0 The Grass is greener on the other side for Iain 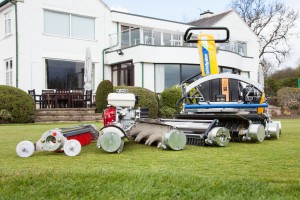 Having been a Greenkeeper for 13 years at various courses around the world it was a challenge for recently appointed Operations Manager at Advanced Turf Technology, Iain Sinclair, to find himself on the other side of the fence.

It was an eye opener as he had no perception of how the machinery he used was manufactured.

"Many turf managers," Ian says, "take for granted the work that goes into producing a brand new product and getting it to market.

Today products have to be more advanced in order to compete against the established brands. In addition, you also have to produce something that will please the budgeting needs of all."

It needs no pointing out that the industry has three very big manufacturers that dominate the market. Previously when Ian wanted to buy a new machine it was taken for granted he would choose a red, green, or orange one!

To break into that monopoly a new product has to be special - and ATT, his new employer, did that with the TMSystem™ for triplexes. Ian again, "Fortunately I was already aware of the TMSystem™ as I had been a user of it and was sold on the concept.

I saw at first-hand how well it worked and appreciated how much of a boon it was, but what surprised me when I joined ATT was how much went into developing it in the first place."

The ATT team is a very small, dedicated one, working closely together but it helped considerably that the inventor of the TMSystem™, John Coleman, was himself an ex-greenkeeper. John's initial concept and unique insight was matched by an engineering skill to produce a soundly robust advanced end product. role at ATT is post TMSystem™ he has been involved in the evolution of the pedestrian version, the INFiNiSystem™.

He knows that to bring another pedestrian mower on the market would be a very hard sell to turf managers.

But the concept has impressed him so much, especially when the established SMART cassettes of the TMSystem™ can be utilised in the INFiNiSystem™ as well, to give ultimate versatility.

"One major importance," says Ian, "was the ability to power the unit via an engine generator or through a battery pack. I could see the need to have a silent option; it is very common for some greens to be a 'no-go' area for noisy machinery before a certain time.

The silence of this machine, when using a battery module, has been recognised by being awarded the Quiet Mark.

Of course if its basic function as a mower was in question then it wouldn't get off the ground, but that isn't the case as it will give you a fantastic quality of cut with its floating head and top quality cutting cylinders."

At lower heights of cut, and on softer greens, there can be a lot of marking on the surface from the bedknife with some mowers.

However, ATT put a lot of time and effort into creating a cutting cylinder that will provide an exceptional cut; crucially at low heights. 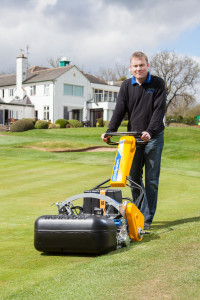 rear roller to allow for an angle on the bedknife.

This has also helped enable higher heights of cut which has proved very popular with football grounds.

Also there is an eccentric on the bottom block which holds the bedknife to allow a more aggressive or less aggressive position at point of cut. A good example of this is when the grass is under a lot of stress.

Moving the bedknife eccentric to allow the bedknife to come forward to a less aggressive position will help the grass go into winter as healthy as possible.

Ian's last words, "One thing that really surprised me is that ATT is always keen to look into the individual requirements of Greenkeepers and Superintendents - something I'm sure isn't possible with the established brands."