"The timing of the concert was critical to the pitch's recovery, and had to be worked around our end of season renovations"

When Elton John came to play at Greenhouse Meadow, in front of 16,000 adoring fans at the 10,000 capacity venue, the pitch had to be covered to provide seating for the additional 6,000.

A Trackway system was employed to completely cover the pitch, with the stage being erected behind the north end goalmouth. "With over 300 tonnes of stage and equipment, it was important to keep most of this weight off the main pitch," said Head Groundsman, Richard Barnett, "especially as it's a fibresand construction designed to be very free draining." 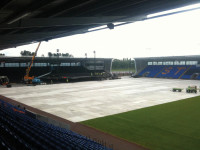 Richard explained that it took him, and his assistant, Andrew Muir, a couple of years to get to grips with managing a sand based pitch, compared to the soil based pitch they had been used to at the club's old Gay Meadow ground.

"Keeping the pitch watered, aerated and well fed are the prime drivers in maintaining a good sward. Rye grasses are very hungry and often require a steady feed throughout the growing season," Richard said.

"The timing of the concert was critical to the pitch's recovery, and had to be worked around our end of season renovations. This year, we were able to begin renovations in late May. The plan was to do a part renovation prior to the concert on the 12th June, and complete it as soon as the concert paraphernalia had been removed from site."

For the team of three, which also includes assistant groundsman (and winner of Pitchcare's Fantasy Football League), Dominic Murray, the experience of putting on a concert for the first time has been very rewarding, if also a little fraught. 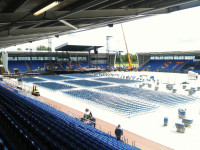 With the stadium being just a ten minute drive from the Pitchcare offices, I popped over to get a first-hand account of how they had coped with the concert and, more importantly, see the condition of the pitch after the event.

I was met at the ground by Richard, who was busy vertidraining the pitch, and Andrew, who talked about their worries ahead of the event and how, with careful planning and sound advice from various quarters, it turned out to be a great success all round.

"There was a lot of anxiety amongst the groundstaff when the concert was announced. The biggest issue, in our eyes, was the date; right in the middle of the pitch renovation period. Also, thoughts of the Don Valley Stadium, following the U2 concert a couple of years ago, when half of the pitch failed to recover in time for the start of the season, kept cropping up in our conversations."

"Back in February, our Operations Director, Ian Bebbington, arranged for us to meet Wolfie from Marshall Arts. He was the man in charge of the logistical set up for the concert, and explained everything that would happen before, during and after the event in great detail. He also gave Richie his counterpart's number at Ipswich, where Wolfie had done two back to back concerts the previous season at Portman Road, under the gaze of the redoubtable Alan Ferguson."

"Richie spoke with Alan for over an hour, and he gave us lots of good advice and told us not to worry. Coupled with Wolfie's explanation of how things would go, it was fair to say we were a lot happier with the situation."

"Taking everything on board, we set about devising a pitch renovation plan around the end of season fixtures, even taking into account the possibility of a playoff game. These plans were slightly compromised by the late inclusion of the Shropshire Senior Cup Final fixture but, following this game, we reseeded the goal areas and assistant referee runs and gave them a topdressing of sand."

"On Monday 16th May, we reseeded and topdressed the goal areas again and, on the last day of that month, sprayed the whole pitch with Dedicate. This was to stop the grass getting any disease whilst it was sweating under the Trackway covers - the ideal conditions for disease to set in." 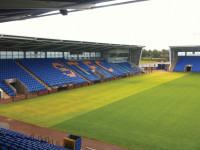 "The following day, preparations for the concert began in earnest. It was a case of watching the media company come in and construct the stage using huge lorry mounted cranes. We just had to let them get on with it, but it was interesting to see the build up of the stage and the on-pitch seating that transformed 'our' pitch into a large concert venue."

"And, of course, we had the added bonus of attending the concert and seeing what Elton John does best, playing to a large, responsive audience."

By Tuesday 14th June, the pitch was back under our control. The first job that evening was to give the pitch a good watering and, the following day, we walked the pitch to clean off any remaining surface debris - mainly litter and some metal clips that held the seating together."

"The next day the pitch was brushed, followed by a cut at 25mm. On Thursday, the pitch was fertilised with 250kgs of Marathon with an NPK of 16:4:8 and watered every night over the next four days."

"Tuesday and Wednesday of the following week, the pitch was vertidrained to try and relieve some of the compaction and, on Thursday, the stage area in front of the North Stand, and out to the eighteen yard line, was heavily scarified, brushed, reseeded and topdressed with sand. This was the only area of the pitch to show any signs that a concert had happened; understandable with 300 tonnes of stage on it!"

"Overall, at this time, it is fair to say that we are very happy with the state of the pitch, and much relieved to see only a minimal amount of damage where the stage had been."

"It will now be a case of monitoring its recovery and continuing with our tried and tested maintenance programme. We'll cut at 25mm up to the start of the season as well as giving it a weekly verticut. Two more passes with the vertidrain will also happen in this period, as will regular fertilising."

Despite all their reservations, Richard and Andrew have been happy with the way it all went, and are confident the pitch will be up to speed for the start of the season. "It was good to come through this process and learn a lot of new skills," said Richard. "Above all, it's been good to see the stadium being used to benefit the people of Shrewsbury and Shropshire, not just football fans."

With this concert done and dusted and, having been so successful, the club are considering more of these events in the coming years. Having now experienced a concert at first hand, Richard says that he will be more than happy to accommodate more of these events, "as long has the club recognise our concerns and needs."

"The damage to the pitch this year was minimal. That may not always be the case," said Richard, "and the club need to be aware that the weather before, during and after the event will influence how the playing surface copes. This year we were fortunate. The timing of the event is crucial. Any later in the summer would leave no time for the pitch to recover," concludes Richard.

In essence, the best policy is for the club is to ensure Richard is kept informed and is able to advise on the best dates for these events. This year it has been 'no sacrifice'!