0 The Greenhouse Stadium - after Elton John has left town 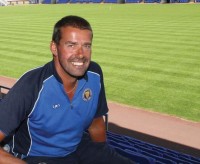 It is fair to say we have had a tough time of it, groundsmanship wise. The football side of things has gone well. At the time of writing, the club are undefeated at home in all competitions this season, and are pressing for promotion from League Two.

The renovation work carried out in the original article, whilst not ideal, worked and has seen us through the season.

From the start of the season, we had a small black layer problem, which we managed to keep under control with our regular pitch clean ups and vertidraining. 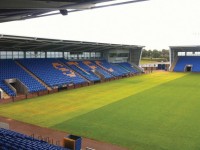 We did have a slight problem of losing grass due to not having a good root depth, but we persisted with a divot mix containing rootzone and Barenberg Bar 7 grass seed, which we used right up to Christmas.

We lost our assistant groundsman (and winner of last season's Pitchcare Fantasy Football League), Dominic Murray, to Reading FC in October. Dom went to work at the Royals training ground and we joked we would see him next season in League One. At that time, Shrewsbury were in the top three in League Two and Reading were languishing towards the bottom half of the Championship. Since Dom's arrival, they have not looked back, and could make a return to the Premier League. I am not suggesting his arrival at Reading has anything to do with the upturn in the Royals fortunes!

The chairman asked us if we could continue without a replacement for Dom to save money and although, at times, it has been tough, we have got through.

We lost one game to the weather in the first weekend of February, against Port Vale. Overnight temperatures of minus 15OC were simply too much for our frost sheets. Bizarrely, the rearranged game was abandoned due to an electrical fire that took out the floodlights.

On the plus side, the club installed a bore hole to fill the irrigation reservoir and reduce water costs. A positive side effect of this was, when the water was tested, it was high in iron and other trace elements beneficial to growing grass. Time will tell if there are any noticeable definitive effects to the grass.

The club also listened to our pleas to have a full renovation at the end of the season. We have a great ally in our Football Manager, Graham Turner, who loves a nice playing surface and, as someone who has been in the game so long as a player, manager and chairman, he has a great

The work has been entrusted to Bancroft Amenities Ltd, from Hyde in Cheshire, to Koro off 25mm, topdress and sow Barenburg Bar 7 again. Bancroft has been very amicable by having two dates to do the work, depending on our final league position.

We have had a couple of detrimental comments from visiting teams but, on both occasions, we put it down to sour grapes. One team had just lost their unbeaten away record and the other threw away a lead against our ten men.

Overall, we have to be happy with how the pitch has played. Our own players have been very positive and supportive in their comments and love playing on it; the record proves that.

FOOTNOTE: Since this article was written, Shrewsbury Town have won promotion to Division 1.