by Trevor Green, GrimsbyLive
in People and Football
on 22 Jul 2020

While players and managers have come and gone, there has - for the last four decades - been a constant presence working tirelessly behind the scenes to make the Blundell Park pitch something to be proud of. 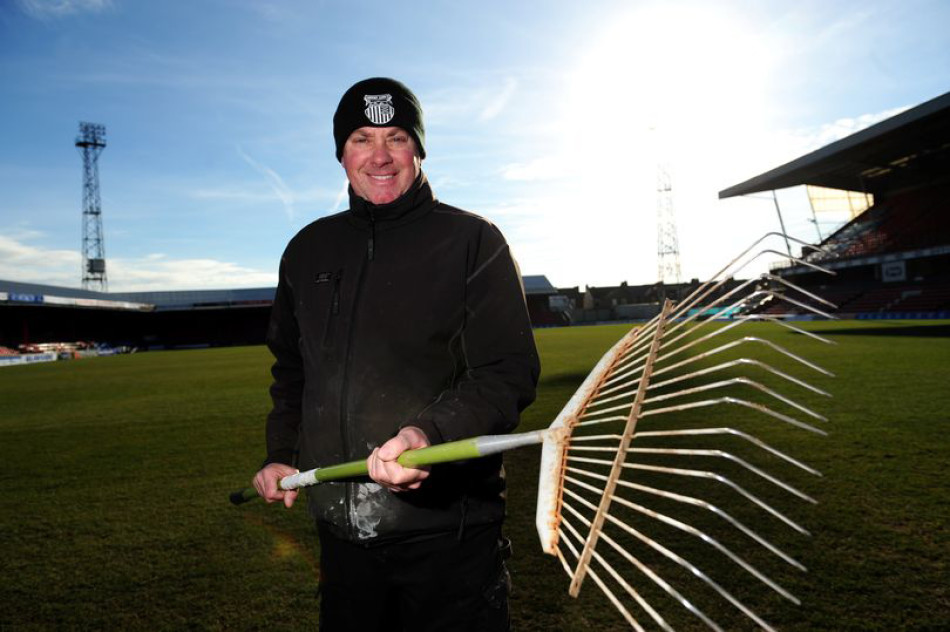 Mike Phillips this summer clocked up 40 years of service as a groundsman for Grimsby Town.

He arrived at Blundell Park after leaving school as a 16-year-old, and has worked there ever since.

Mike has seen his fair share of changes and challenges in his long stint, but admits when he returns back to work from furlough, he will have one of the biggest jobs he's ever had on his hands to get the pitch ready.

"It's been a strange feeling on furlough and it's awful seeing the pitch and knowing what it needs," he said.

"The pitch is a mess at the minute. When I get back to work, I have got a lot of work on. It has got fox holes in it. Foxes have been on the pitch, running around and digging. There are holes eight inches deep."

"The grass is yellow as it needs a feed. It needs fertiliser and nitrogen on it to thicken it up, and extra seed which it hasn't had."

"I have never seen it this bad in July in all the 40 years I have been here!"

"Mr Fleming (Ian, chief executive) has been cutting the pitch once a week. I came in and showed him how to do it. But it is not in good condition." 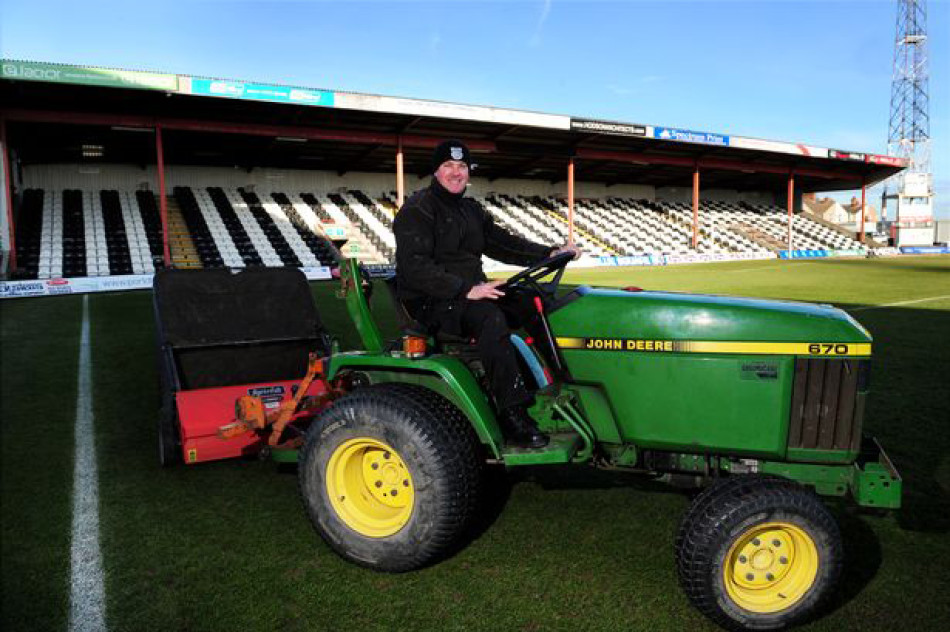 Finances of course dictate what the club can afford in terms of machinery and equipment, and given the club's limited budget, Mike has done a sterling job over the years.

"I haven't got these machines that the top clubs have got now as it so expensive," he explained.

"The last major piece of kit we got was in 1998 from the Wembley money. It's something that aerates the pitch. I am still using it 22 years later - it's a good piece of kit."

"Things have moved on since then, you can get far bigger ones - but then you would also need a bigger tractor to pull it."

"Obviously we haven't got the money to buy a new tractor and a bigger aerating machine. The one we have is 1.2-metres - four foot - so it takes me a long time to do the full pitch."

"Groundsmanship has changed over the years. If you look at Match of the Day - and even Scunthorpe United did it when we played them in March - straight after the game, you'll see the groundstaff straight on with little mowers gong up and down."

"They are not actually cutting the pitch, they are rotary mowers and are just sucking the debris up - the divots that players kick out, to clean the surface up."

"When we went to Chelsea this year they had 12 staff out there on the pitch! There is only me looking after Blundell Park now."

Blundell Park's location brings with it a specific set of challenges. 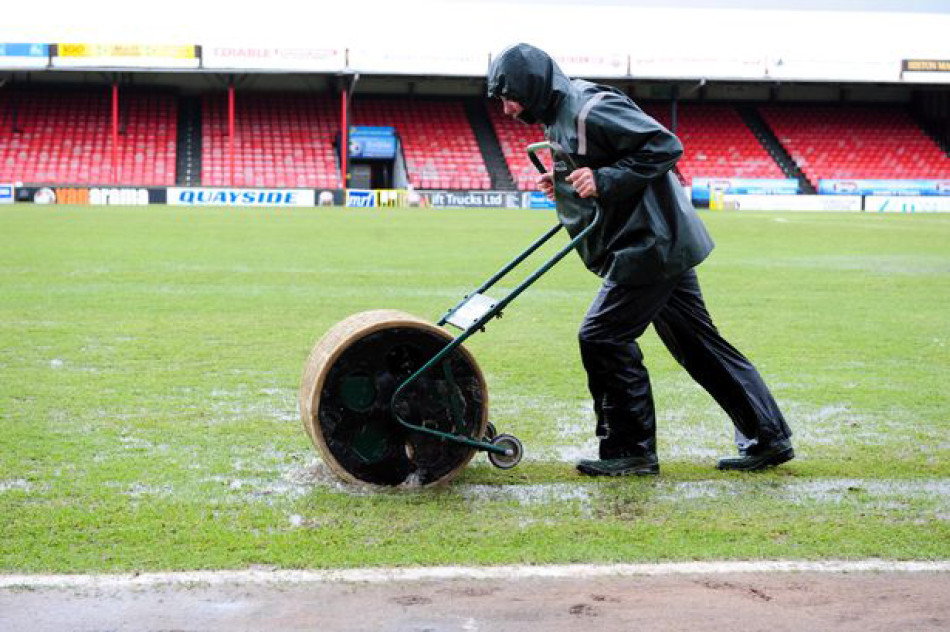 Mike clearing the pitch of water back in 2014

"We have always struggled with drainage when we get a really wet winter. There is a lot of clay underneath the surface," said Mike.

"Blundell Park, in 1899, was built on an old brick and tile factory, so there is a lot of debris and all sorts underneath the pitch."

"You'd think being near the beach there would be a lot of sand under the pitch. But it is boulder clay. The word Cleethorpes means 'Clay Village'."

"Interestingly, I have heard that ever since they put the new sea wall up, it affected drainage and the water table - water didn't get away quick enough. Before, as the tide went out, it helped suck the water from underneath the pitch. That's what a previous groundsman told me in the 1970s, I don't know how true it is."

Despite limited resources, Mike has won the coveted groundsman of the year award on three occasions. 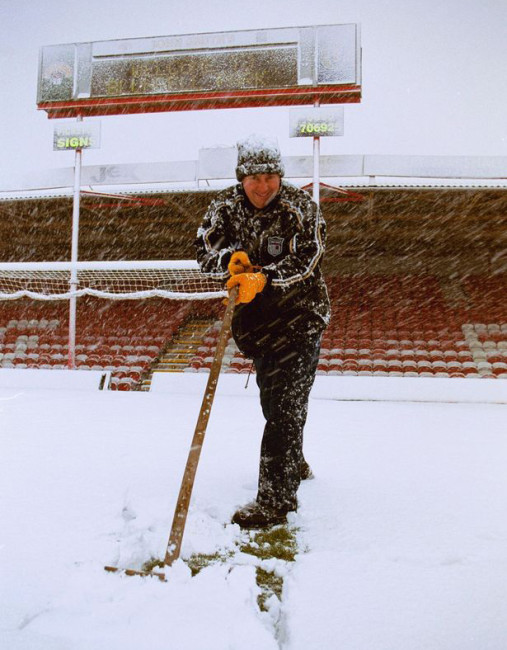 "We could use a snow plough!" Mike on the pitch, one particularly snowy winter

He continued: "Since I took over the head groundsman's position from Frank Bridge in 1993, I won my first award in 1997. I won my second one in 2008. And I won the Conference best groundsman in 2016, the year we got promoted."

"It's nice to look back on achievements you have had and recognition for your work."

"It wasn't always the best pitch, that's not what the awards are for, they consider what you have to work with - resources and staffing levels."

The way Mike sets up the pitch has changed, with each manager having his own preference. Alan Buckley, in particular, took a keen interest.

"Mr Buckley liked it nice and short for his passing game. If it wasn't right he would let us know about it," recalled Mike.

"When Alan took over in 1988, Frank Bridge was the groundsman and I was his assistant. On one Friday, we had got the pitch ready for a home match, all cut and marked out. Frank had gone home for the day and I was waiting to lock up."

"But then I saw Alan walk past and he said 'Michael, is that it, is that how it's going to be? That's not good enough, Michael, I want that pitch shorter by another 5mm'."

"So I phoned Frank up who was having his tea at home. He came back and we had to re-cut the pitch and re-mark it well into the night."

"We learned our lesson - we always kept it short for Mr Buckley after that."

You can read the original article from GrimsbyLive HERE