In 1961, Eton College head groundsman WH Bowles looked back at the revolution in sports ground maintenance, from the 'horse and buggy age' to the 'jet age' 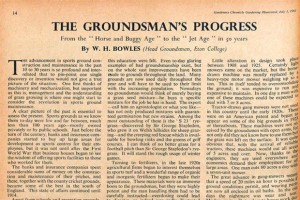 The advancement in sports ground construction in the past 10 to 30 years is so profound and interrelated that to pin-point one single discovery or invention would not give a true picture of the situation. One first thinks of machinery and mechanisation, but important as this is, management and the understanding of grass growing is where one might start to consider the revolution in sports ground maintenance.

A clear picture of the past is essential to assess the present. Sports grounds as we know them today were few and far between, much less than 100 years ago - mostly owned privately or by public schools. Just before the turn of the century, banks and insurance companies started to buy up large areas for developement as sports centres for their employees, but it was not until after the First World War that business houses began to see the wisdom of offering sports facilities to those who worked for them.

The banks and insurance companies spent considerable sums of money on the construction and maintenance of their pitches, and these, together with the country cricket grounds, became some of the best in the south of England.

Apart from schools and recreation grounds, 50 years ago sports grounds were used on Saturday afternoons only. In general, power for cutting and rolling was provided by horses or donkeys and fertilisers were not widely used until a quarter of a century later.

Sports ground construction was at its best between 1860 and 1914 - for it was mostly done by hand. Modern earth-moving equipment gives speed but not that pride of workmanship cherished by the craftsmen of 60 years ago.

Another important factor was that money was not available as it is today, and this held up research work. New models of machines were rarely seen. The groundsman was guided by the rule of thumb, and, in the main, he thought that when he had cut and rolled his ground the job was done. Had he wished to do more, lack of money would normally have prevented him. Some groundsmen were highly competent, but as grounds were litttle used malpractices were not noticed at once. Excessive consolidation by over-rolling and the use of heavy mowing machinery became very noticable in the 1920s.

For example, de-worming came into vogue half a century ago, but the the measures taken often accelerated overconsolidation. A famous hockey pitch de-wormed in September, without proper piercing, became completely waterlogged by December. The remedy of those days was worse than the disease.

Education of the groundsmen was the first step. It was some time before the benefits of this education were felt. Even today, glaring examples of bad groundsmanship exist, but on the whole vast improvements have been made to grounds throughout the land. Many grounds are now used daily throughout the year and will have to be used to their limit with the increasing population.

Nowadays no groundsman would think of merely buying a grass seed mixture, and the expert has not only produced mixtures with guaranteed germination but new strains. Among the most outstanding is the 'S 23' rye-grass - discovered by Sir George Stapledon - who grew it on the Welsh hillsides for sheep grazing, and the creeping red fescue which is invaluable for the greens of golf courses. I can think of no better grass for a football pitch than Sir George Stapledon's rye grass. It will stand the rough usage of winter games.

Turning to fertilisers, in the late 1920s agricultural firms began to interest themselves in sports turf and a wonderful range of organic and inorganic fertilisers began to make their appearance. These materials were an immense boon to the groundsman, but they were highly potent and the man handling them had to be carefully instructed - overdosing could lead to disaster, as indeed was sadly illustrated when a golf course received double the usual amount, and the grass was killed.

Over-use of nitrogenous fertilisers brought in its wake diseases such as fusarism which could ruin large areas of splendid turf. Control in the early days was difficult, but thanks to scientist making available modern treatments these diseases should never get out of hand.

It is difficult to realise that as late as the mid-1930s Lords Cricket Ground was completely swallowed up by leatherjackets and a cure was not known. On small areas liquid substances could bring these pests to the surface, but they had to be swept up within seconds otherwise they returned to the soil. After all the grass at Lords had been killed, either by leatherjackets or the supposed cures; lead arsenic was found to be a dependable killer of this pest without doing the slightest harm to the grass. Since those days, improvements have been made and other, superior, substances introduced.

Weedkilling on a large scale was practically impossible until selective weedkillers arrived after the Second World War. Now, by a mere spraying or dusting as one may wish, up to 70 per cent of the weeds are wiped out in one application.

This brings us to mechanisaton. The first mowing machine was invented in 1838 and for all practical purposes the same principal applies today - that is, the cylinder type machine. Motor mowers became available around 1908.

The heavy-type motor mower weighing up to a ton tended to overconsolidate the ground, was expensive to run and expensive to maintain. In one day a man with one of these machines could be expected to deal with seven or eight acres.

Tractor-drawn gang mowers were not used in this country until the early 1920s. These were on an American patant and began to appear on some of the big grounds in 1923 or thereabouts. These machines were not received by groundsmen with open arms, for not only did they not know how to use them but the grass was left on the surface. It was quite obvious that, with the arrival of reliable tractors, these machines would cut all areas of five acres and over. Now they are used everywhere and economics demand their employment for all larges areas.

The great advance in gang-mowers means that a speed of 20 miles per hour is possible if ground conditions permit, and wearing parts are now all enclosed in oil baths. In the old days the nightmare was wear and tear. Modern units will stand up to heavy work day in, day out. In this connection I would particularly mention the products pf Lloyds of Letchworth, Ransomes of Ipswich, Shanks of Arbroath and Greens of Leeds, whose one aim has been to produce a machine which is simple in every way without oiling or greasing by the user.

An important development is the rotary mower, which is extemely good for cutting long grass. It revolutionised this type of work, but at the moment is far from satisfactory for use on sports grounds.

Smaller tractors are appearing and are capable of pulling up to three units, and in some cases, for example the Bonser, can carry up to a ton. The rubber-tyred wheels can be changed for spiked wheels in winter and this represents an important advancement for general catering purposes during the winter months.

The hard work of lawn mowing is now almost a thing of the past. The Ransomes' Surtees and Lloyd's Pegasus motor-driven machines give a perfect finish on cricket pitches and bowling greens. Another trend is the gradual replacement of the two-stroke engine by the four-stroke on all machines. This makes for much greater reliability.

In the early 1930s, Mr Hargreaves decided to apply his great engineering knowledge to the improvement of sports turf, and after discussion with well-known groundsmen came to the conclusion that a deep spiking machine was essential. He invented a tractor-drawn machine which was the forerunner of the modern range of spiking machines. The Reffell Rejuvenator is another advancement in sports ground maintenance. It has reduced the work of obtaining fine tilth for seed sowing after winter games from days to hour.

The tremendous advance in sports ground maintenance that has been made has many contributory factors; by no means the least is the educational work of the National Association of Groundsmen. The source of this progress is in scientific research and the remarkable developments in modern equipment.

Where up-to-date machinery is in use the force is reduced at least by half and arduous tasks have practically disappeared. Much research work on stubborn turf problems is carried out at the Sports Turf Research Institute, Bingley, Yorks. Its excellent publications need no introduction to progressive groundsmen and others interested in the production of fine turf.