Throughout the summer in 2015, The Grove, London's five-star golf resort, is set to host two of the UK's leading open amateur competitions, Back on Black and The Bentley Cup. 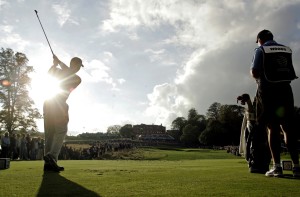 Located less than 25 miles north west of central London, The Grove remains the only UK venue to have hosted a World Golf Championship (WGC) event in 2006, which was won by Tiger Woods.

The Back on Black event, returning for its 11th year, provides a unique opportunity for amateur golfers to experience what it was like to play in the final day of the WGC tournament, as the tee and pin positions mirror those faced by Tiger Woods.

The competition is made up of four separate summer qualifying rounds, culminating in a Grand Final on October 4, where the champion wins a four-night golfing break for two to Dubai.

The Bentley Cup, sponsored by the luxury car manufacturer, is a pairs-only event, designed to ensure all entrants receive 'the tour pro treatment' from the moment they arrive at The Grove.

The top five teams from the qualifying events throughout the summer, progress to the Grand Final on September 28, with the overall champions winning a prize to compete in the Sportingclass Srixon Industry Invitational Finals in Florida, USA.

Anna Darnell, Director of Golf at The Grove, said: "Back on Black and The Bentley Cup are fast-becoming two of the UK's most prestigious open competitions. Many golfers now return year-after-year to compete in these events, such is their popularity."

Designed by internationally acclaimed golf course architect, Kyle Phillips, The Grove continues to be acknowledged in many influential Top 100 rankings lists, including those produced by Golf Monthly and Golf World magazines and Top100golfcourses.co.uk.