0 The ‘hallowed’ turf of Germany at The Gerry Weber Stadium 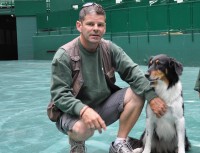 The Gerry Weber Open is part of the ATP World Tennis Tour and has grown to become one of the largest media sporting events in Germany.

Its timing is perfect for those players looking to hone their skills ahead of Wimbledon Fortnight.

For twenty years, the good and great of men's world tennis have congregated in Halle, North Rhine-Westphalia, Germany, in early June, to play in the Gerry Weber Open - and it's a tournament played on grass, perfect timing for honing those specific grass court skills ahead of the All England Championships at Wimbledon. It has become one of the largest media sporting events in the country, with over 100,000 spectators and a worldwide TV audience.

The tournament is named after the fashion group Gerry Weber International AG, whose headquarters are in Dessen. It is played on four outdoor grass courts and the Centre Court, and is a part of the ATP World Tour 250 series on the ATP Tour schedule.

The Centre Court (the Gerry Weber Stadion) has 12,300 seats and a retractable roof which can be closed in under ninety seconds should rain interrupt play. The stadium is heated and is also used for other sporting events, including handball, basketball and volleyball - traditional hard court sports - plus boxing and concerts.

So, how is a grass surface achieved on top of a hard surface? In early July this year, Pitchcare Germany's editor, Marcus Neemann, went along to find out. There he was met by Englishman, Phil Thorn, who was waiting to greet him on Roger Federer Avenue, recently renamed in honour of the tournament's most successful player with five championship titles.

Phil is the son of Jim Thorn, the former Wimbledon Head Groundsman, who moved to Germany in 1992 to help establish lawn tennis in the country. Jim was responsible for overseeing the building of all the grass and hard surface courts, working closely with tournament director, Ralf Weber, whose idea it had been

to play on grass. To assist him, Jim had asked his son to join him.

At that time, Phil was Head Groundsman at Surbiton Racket & Fitness Club. "I lived with my father at the All England Tennis Club and regularly used to help out during preparations for the Grand Slam event. I had always had, in the back of my mind, that I would like to work as a head groundsman abroad someday, so when I got the call from dad, I jumped at the chance," explained Phil.

Sadly, after working closely with his father for seven years, Jim passed away, aged seventy-eight, and Phil became head groundsman.

"In the first few years, the grass court was grown permanently in the stadium, but, when demand increased for additional usage and revenue in the mid-nineties, a portable pallet system needed to be developed, if the successful tournament was to continue."

Phil went on to explain the basic requirements. "We had plenty of space outside the Centre Court for the pallets and needed to cover a total area of 40 x 20 metres."

"Where lawn tennis is concerned, the only things we actually do is harm the grass, and certainly don't support growth during the period of the tournament."

The unique roof design, which closes in under ninety seconds, means that events can be put on regardless of the weather. Two mobile, air-filled roof panels, 50 x 35 metres (about 1,750 square feet), run along a 68 metre track. The roof was added during the second phase of construction, and the palleted grass has to be managed carefully once insitu.

"Because wet grass for lawn tennis is an absolute no no, we have to monitor weather patterns in detail," explained Phil. "Each pallet measures 2 x 1 metres and, about five weeks before the tournament, they are individually mown. There are four hundred of them! Each one is numbered to ensure that they are correctly laid out once in the stadium."

"Transporting them into the stadium is pretty straightforward, using forklift trucks. However, before that happens, they have to be heavily watered to avoid the edges breaking off when being moved."

"Around three weeks before the tournament the pallets are moved into the stadium. The roof remains open and the turf is left to the elements to settle in. We are aiming to get it in the optimum condition for tennis."

"We use large fans to circulate the air inside, which also promotes the drying of the upper rootzone to achieve the desired firmness for the court. Basically, what we are wanting to achieve is the desired hardness in the loam/clay, whilst leaving sufficient moisture in the lower section for the grass to survive." 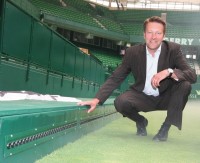 To further help with moisture content, an additional aeration system was developed and installed in 2008. This runs parallel to the edge of the court and consists of an airduct and eighty rails, each with a total of 2,400 nozzles and portable ventilation units. The system allows Phil to release up to 40,000 cubic metres of air per hour into the stadium, which cools the air in the turf and extracts the moisture. The air is then dried and blown back into the stadium, keeping it at about 2OC below the ambient temperature.

"Even the high humidity caused by 12,000 spectators inside the stadium can create an adverse microclimate that leads to disease," stresses Phil. "The spectators also benefit from constant fresh air."

Immediately after the final, the pallets are removed from the court and placed back out in the open where Phil will verticut them and, depending on the weather, give them a cut with a Toro Greensmaster 3100. The baseline areas are then reseeded with a special Lolium/Festuca seed mix, and a topdressing is added.

Phil then took me to Court 1, which is directly adjacent to the stadium building and has a capacity of about 3,500.

Even just a week after the tournament, the court looked in good condition; even the baseline areas showed good grass coverage. "Partly because the serve and volley game has gone," suggests Phil, "most of the wear is now on the baseline areas only whereas, back in the nineties, players would use more of the court. The authorities have also deliberately slowed the game down to make it more attractive for the audience, with rallies lasting longer."

Early to mid September, Phil begins his renovations on all the other grass courts. "I deep scarify four to five times to remove the thatch layer that will have built up over the season. Then I'll aerate using a Toro Procore with 16mm hollow tines to a depth of 10cm. After clearing the cores, I oversow and topdress with a Surrey Loams special tennis mix."

"During the growth period, I verticut every two to three weeks, depending on the weather. I'll also aerate two or three times a year with 6-8mm solid tines down to a depth of 10cm. I would love to do more, but there is simply not enough time," says Phil.

"Tournament height of cut is 7mm. In the cooler months, I raise that to 10mm," explains Phil, "and start reducing it back down again in late April but, again, depending on the weather."

"In 2010, we carried out major work on courts two and five, fraise mowing to a depth of 3cm, followed by laser levelling," says Phil. "Then we added a total of eighty tonnes of Surrey Loam, before overseeding with a Wimbledon type mix."

Any fertiliser applications are granular, but Phil is trying to take a more sustainable approach as European legislation is ever changing and, he believes, the decision will eventually be taken away from him anyway.

As my visit comes to an end, I meet up with Phil's longtime employee, David Hayden, who is overmarking one of the grass courts with the same attention to detail that has made the Gerry Weber Stadion complex one of the best grass court facilities in Europe.