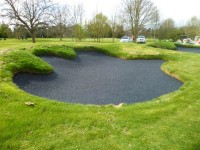 The record rainfall of the last three years has had a significant impact on the budgets of UK golf clubs.

Over the course of a year a recent survey has identified that it costs a golf club an average of £416.88 to repair each flooded bunker, adding further pressure to maintenance budgets, which are already under severe strain.

The survey was conducted by Blinder Bunker Liner with Course Managers at golf clubs throughout the country and identified that an average bunker (50m2) which flooded involved two greenkeepers spending two hours to remove contaminated sand and two hours to replace the sand. That equates to eight man hours which at current average greenkeeper salary rates * equates to £76.88 in labour. Take an average cost of £340 for sand and that gives the cost of repairing just one flooded bunker once.

Other hidden on-going costs adds still further to the drain on golf club finances with the time spent maintaining contaminated bunkers per day working out at 10 minutes each. Doesn't sound much but work that out at £6.72 per week and approximately £249.44 per annum, per bunker. Take an average number of 80 bunkers per course and the potential cost just to spend 10 minutes per bunker removing contaminated material and you have an approximate cost of £19,955 in labour alone each year.