by External source
in Industry News
on 28 Oct 2014

The theft of endangered and rare flowers has led botanical gardens to go to extreme measures to protect their plants, locking them down with cables and installing CCTV. But is this enough to preserve such species? 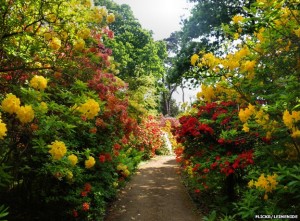 The gently swaying trees and luscious foliage of the Sir Harold Hillier Gardens in Hampshire hardly look like a crime hotspot. Young families amble with pushchairs and pensioners take tea and cake. But the staff must remain vigilant.

"Each time there's a theft it's as shocking as the first time," head gardener Fran Clifton explains.

"Earlier this year we put out two of a certain rare species of mahonia, and within a week one of them had gone."

They say thefts take place regularly, including hundreds of bulbs of new snowdrop varieties worth up to £100 each. Now the snowdrops are kept locked away and on limited display.

"Records show 10 to 20 plants are stolen a year from here," says the site's botanist Barry Clarke. "In reality it's probably much more than this. I imagine 50% of those plants will die shortly after being taken."

He also has his suspicions about who's responsible: "We've caught people taking cuttings before - and they can be anyone from the little old lady down the street to a young person out of agricultural college.

"But sometimes the mother plant is stripped to such a degree the plant is damaged beyond repair. We are of the opinion that unscrupulous nurserymen may be to blame for this kind of theft."