Blackburn Rugby Union Football Club was founded in 1877 in what was then, and still is today, a 'soccer' mad area. Premiership sides Blackburn Rovers, Bolton Wanderers and Burnley are just a stone's throw away, as are Preston North End from the Championship and Accrington Stanley from League 2. Some of the club's early history is a little vague, due to newspaper records having been destroyed by fire, but there is hard evidence of games against such teams as Preston, then known as Preston Rovers, in their first year.

It was thought that the club had been reformed in 1921 but, after some dedicated research, continuous rugby from 1877 was proven. Having celebrated what they thought was the club's fiftieth anniversary in 1971, the RFU accepted that, officially, they were founded in 1877.

In their formative years various grounds were used, including one at Ewood Park but, in 1920, the club settled in the 'Yellow Hills' near to the Clog & Billycock pub which was used as a changing room. Playing subscription was one guinea per annum.

In 1932, the members purchased land at Ramsgreave where the club are still based. A wooden hut was added as a clubhouse which survived, along with a stuffed bison's head, until a new clubhouse was opened in 1964.

Further land was added and an extension was built with the help of lottery money. Two years ago, with the aid of an RFU loan, they were able to redesign and refurbish the clubhouse. 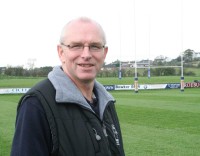 Behind many clubs there's an army of committed volunteers with, quite often, a few individuals who run the club from top to bottom and often find themselves doing every job going. Phil Isherwood is one of these who has spent many years committed to helping Blackburn RUFC.

He currently holds the post of administrator and groundsman, perhaps no bad thing as, at least, he knows what budgets he has available!

Over the years Phil has built up a number of contacts, especially on the groundscare side of things, getting to know local contractors and fellow groundsmen, including Steve Patrick, Head Groundsman at Blackburn Rovers, who is always willing to give advice when required. Phil was also recently visited by Keith Kent, from RFU headquarters at Twickenham, on one of his club workshops whilst touring the country. Even though the ground was frozen at the time, Keith could see how well the pitches were holding up.

In 1997, the Club was able to raise funds, with the help of Lottery Funding, to build two new pitches. The works were specified and supervised by PSD (John Hacker) with John Mallinson (Ormskirk) acting as contractor. At the same time, relevelling and draining the main pitch took place. New primary drains were installed at five metre centres, sand banded and ameliorated with sand to improve surface drainage and restore levels. Phil says that, before this work was undertaken, the first team pitch was often a quagmire.

Phil ensures these new pitches, and all of the five pitches now in constant use, always get a fairly significant programme of end of season renovations. The work entails decompacting the pitches with a vertidrain or linear aerator, topdressing with fifty tonnes of sand, overseeding with rye grass plus an application of pre-seeding fertiliser.

He hires in local contractors to do the work and then, once the new seed has established, continues with his ongoing, yet fairly basic, maintenance regimes.

The pitches are cut two to three times each week, depending on growth, using a New Holland TC27D tractor and new Trimax ProCut rear mounted rotary mower, recently purchased with help from Groundmatch grants from the RFU.

The grass is kept at a height of 55mm and fed twice a year, once in May and again in August, with a 12:6:6 NPK granular fertiliser.

Phil also drag harrows and slit tines the pitches as often as he can, fitting it in around his mowing routines and dictated by the weather.

The pitches are marked weekly using a spray jet marker.

The club also rent out some of the pitches for other sports. Lancashire Wolverines American Football team use one of the pitches throughout the summer months, and the main pitch is also used for summer rugby league, bringing in much needed additional revenue.

The main pitch has in excess of seventy matches played on it from the end of August to May during the rugby season, and a further fifteen games of either rugby league or American football during the summer. Many regional schools' competitions, for various age groups, take place at Blackburn throughout the year and one of the highlights of the summer is the "Wooden Spoon Charity" MLD/SLD annual tournament, when more than 300 youngsters with mild and serious learning disabilities enjoy a day of rugby.

Phil allocates in the region of £10,000 per year on the five pitches. £6000 is used to cover the end of season works with the remainder spent on ongoing maintenance costs.

As a part time groundsman he manages to commit between fifteen and twenty hours a week to maintaining the ground. It is a job he gets immense satisfaction from, especially when the rugby pitches are considered to be among the best in the North West.

It was Phil who invited me to visit the club to try and help him solve a problem he was having on the centre spot - a two square metre area of turf was dying off. We had discussed some of the possible causes, such as compaction, soil contamination and pest or disease damage. Without seeing it, it would be difficult to comment. So, I popped in to see him whilst in the area visiting Paul Bradshaw at Burnley Football Club.

The first thing we did was to hand fork around the offending area to see if there was any difference in hardness. Then we dug a hole to inspect the soil profile and root depth to see if there were any signs of layering, black layer or any other offending issues.

Root depth was shallow, and there was a layer of dark material that did smell slightly, but the soil did not seem to be unduly compacted. I suggested sending some samples off to be tested to see if there was any contamination, whilst, at the same time, finding out the soil type, soil Ph and nutrient status. 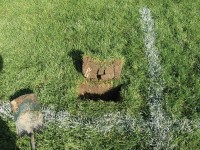 I also recommended that, come the end of the season, localised aeration work across the central area of the pitch would be a good idea, followed by topdressing and overseeding, and then hope the area recovers.

For the time being, and to see him through to the end of the season, Phil has decided to returf the area using fresh turf from the side of the pitch.

Phil is only too aware of the issues that face many clubs with regard to finances. Remaining viable is all about marketing the club and maximising the use of the facilities, in terms of the pitches and clubhouse. He is mindful that, at many clubs, the pitches are neglected in favour of the clubhouse.

This he sees as a recipe for disaster. Poorly presented pitches do not attract players or help the club promote exciting rugby. He knows only too well that the secret is to invest in the pitches. Even at a low cost of £2000 per pitch, Phil sees the results of his labour, with well presented pitches that are the envy of many local clubs.