0 The home of show jumping is reborn ... 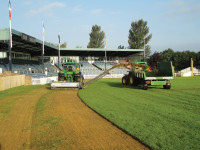 The famous main arena at Hickstead's All England Jumping Course, lay stripped bare of its emerald turf at the end of the summer, a shocking sight to anyone who is used to seeing it in all its glory as host to international show jumping competitions, and its flagship DFS Jumping Derby.

But, it was all in a good cause - part of a £500,000 project to restore Hickstead to its position as the pinnacle of show jumping.

Edward Bunn, whose family owns and runs the equestrian venue founded by his late father, Douglas, in 1960, explains: "We have always been able to provide good ground in dry weather at Hickstead, but rainfall patterns have changed - we can now get downpours of 10mm in two hours, and it rapidly becomes too soft."

He sought opinions from the leading show jumpers, who suggested that the inconsistency of the arena surface was an issue, with firmer areas alongside soft spots making for difficult going to ride on. They also cited the Royal Dublin Society's showground, which had recently been renovated under management from STRI, as their favourite venue. 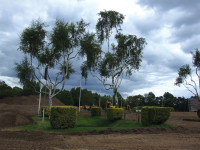 Whilst pitches and golf courses make up the bulk of the STRI's work, it also has experience in the equestrian sector, overseeing developments at Cheltenham and Ascot, as well as Dublin. However, it was the transformation of Ireland's premier show jumping venue that convinced Edward to engage the organisation's consultancy arm to manage the renovation at Hickstead.

Synthetic surfaces are used by many smaller equestrian centres, and have also made their mark in racing, but Edward insists this was never an option for Hickstead when considering how to improve ground conditions.

"The best surface for show jumping is natural turf. When you see a horse land over a fence, turf offers a combination of give and support to the hoof. Riders are increasingly of the opinion that jumping on artificial surfaces can lead to injuries to their horses."

Richard Hayden, who is leading the project of behalf of the STRI agrees. "There is a shift back towards natural turf. We are getting enquiries from venues with artificial arenas to return them to grass, and even proposed facilities in the Middle East, where synthetics may be more manageable, are specifying turf." 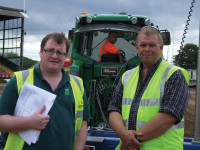 The technology and knowhow is now available, he suggests, to produce turf surfaces that are better than ever. This summer, STRI's local consultant Charles Henderson measured the performance of the existing turf at Hickstead for hoof traction and penetration as well as firmness, using a device known as the Longchamp Penetrometer, originally deployed in racing. This device measures the penetration of a 1cm2 probe following successive blows from a 1kg mass falling from a height of 1m.

The information was used to create the specification for the new surface which, Edward Bunn hopes, will create a new global standard for show jumping.

Redevelopment of the main arena was complicated slightly by the need to preserve Hickstead's famous permanent features - the iconic Derby bank, which riders must cross immediately before jumping a tall post and rails, a 'Devils Dyke' and numerous other banks, hedges and ditches.

Another feature to be retained was the overall gradient of the four and a half acre arena, which drops 2m from corner to corner. "The riders like the slope, but wanted it to be more consistent across the gradient," comments Edward. 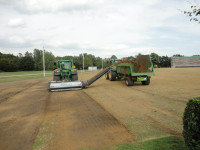 Work began on 8th August, with local contractor Premier Pitches brought in to first strip the turf surface, and then remove the topsoil, using a Koro Field TopMaker.

Both materials were bound for recycling - the turf mixed with manure and composted for use as a topdressing, while the topsoil was reused.

The next stage was to regrade the arena surface, using a laser guided dozer and 3-D grader. At this point, Irish contractor Clive Richardson, responsible for masterminding the Dublin project, and his team came in.

"Clive has the experience and the manpower to make this project work," explains Richard. "On such a large arena, it is important to get the initial stages done an

d the arena weatherproof while conditions are good. Working with soil is what makes it more complex than, say, a golf course development, where the rootzone used is less weather dependent."

STRI's specified construction has been aimed at improving the drainage, while boosting the ability of the surface to hold water in dry periods. It uses a gravel carpet construction pioneered at Leeds United's Elland Road ground some twenty years ago, which connects the soil to the drainage system, last upgraded in 2006-7.

The carpet is topped by a blinding layer of coarse sand, and then the topsoil is added. Hickstead's indigenous clay soil has been mixed with sand to give it a more loamy characteristic.

Materials have been sourced locally, where possible, Edward explains, both to support local businesses and also to avoid unnecessary delays.

"Sand came from a local quarry, while the gravel was sourced by a local company from a supply in Cornwall via a barge to Shoreham - we can't afford to have lorries of materials stuck on the M25. But, we are also fortunate to have space to stockpile materials on site," he says.

Material specifications were decided using STRI lab test data, with a 'mini profile' constructed, which had water run through it to determine if the materials would migrate under precipitation. 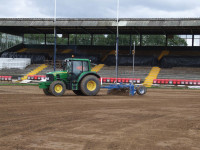 Grass seed cultivars, also selected from the STRI's own recommended list, with the intention of growing the sward from seed rather than using turf. Annual meadowgrasses made up much of the original sward, but the new arena turf will be predominantly ryegrass.

"We're aiming for a 70/30 mix of ryegrass and smooth stalked meadowgrass, but as the meadowgrass takes longer to mature, it will be mainly ryegrass initially," says Richard.

Grass seed went in ahead of schedule in early September, before being covered with a germination sheet and left to grow.

"We had lights available, if we needed to work 24 hours a day, to ensure that seeding was completed on time to give it the best opportunity of establishing before the winter," says Edward. "The benefit of Clive Richardson's organisation is that he could have supplied additional manpower and machines if we required them. The contractors were also accommodated and fed on site, so we had a longer working day than if they were having to commute each day." 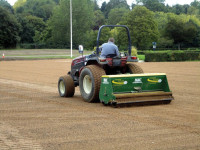 Now the grass seed is in, the arena is due to be handed back to Edward Bunn and his team. Groundsman Matthew Steinke is to be specifically assigned to the main arena and he, Edward and another groundsman will receive training from STRI on how to maintain the new surface this autumn.

A stream of high profile visitors is expected at Hickstead throughout the establishment phase, including show jumping's governing body, the International Equestrian Federation.

"The arena will not look very pretty during this time," Richard warns. "But we have to allow the grass to establish itself, and not be tempted to use too much fertiliser."

The first mow could be as early as October, but is more likely to be in February or March, he suggests.

Changes to the maintenance regime will include a move from rotary to cylinder mowing to encourage the sward to thicken up quickly, along with regular aeration and topdressing.

"Hickstead will also go on to foliar fertilisers rather than agricultural granular products," says Richard. "It's a matter of bringing the maintenance regime up to date to match the new construction."

Regular overseeding from the spring up to the Derby meeting in June will also help to establish the new turf.

"It's a much more intensive regime," admits Edward, "and Matthew will work closely with Charles to get a feel for the new arena surface and how to manage it."

"We really want this to work, and we have every confidence in STRI. We have built arenas before, and could have done it in house, but we wanted to take advantage of the science and technology that is available, and the industry expertise to develop the right aftercare. It's a complete package."

The developments will doubtless be appreciated by the show jumpers who, Edward says, are 'very protective' of Hickstead, but will also offer the opportunity to make more use of the arena and extend its season.

"The demand is certainly there for another multi-day, national event, so we could expand our programme," Edward comments. "But, more importantly, we fully believe that we can deliver a world class surface for show jumping once again."