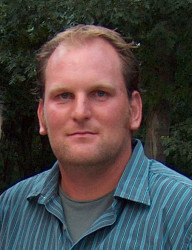 Having been away from Ireland for so long, and my experience at home being limited to American style management, it is difficult for me to make direct comparisons between turfgrass maintenance in the US and Ireland. After a brief introduction of how I got from my first day working on a course to this article, I'll discuss some of the things American superintendents contend with and you can make the comparisons.

I grew up in Castlecomer, Co Kilkenny and spent many childhood years wandering around the club there with my dad. I never really considered greenkeeping as a career until I got a summer job at Mount Juliet while still in secondary school. I started there full time after my leaving and attended the course at the Botanical Gardens, which along with my work experience, was enough to get me accepted into the two-year program at Penn State. I interned at Loch Lomond between my two years and got an assistant-in-training position at Pine Valley in New Jersey upon graduation.

This became a full assistants position after six months when I took over the Short Course. From there I accepted a grow-in superintendents / project managers position at LedgeRock Golf Club in Pennsylvania, which opened in July 2006.

Pine Valley has been rated the number one course in the world by almost every publication since the ratings began. It truly is a golf heaven, one that having any part of is a true privilege. From its very unassuming surroundings you enter from a dead end road over train tracks into one of golf's Meccas.

There is the 18-hole course; the ten hole Short Course, a twenty-acre double ended driving range and numerous overnight accommodation options. It is 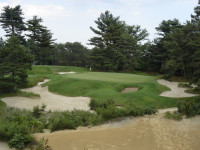 located about 16 miles from centre city Philadelphia, an area where it is extremely tough to grow turfgrasses. It is situated at the northern edge of the transition zone (where both warm and cool season grasses can coexist.) Being at the northern edge it favors the cool season grasses; however, since the summer temperatures average anywhere from the high twenties to mid thirties coupled with high humidity, it makes it a tough time for bentgrass and especially poa courses.

Pine Valley is an interesting combination as the old course is predominately poa on push-up greens and the Short Course and Driving Range are predominately bentgrass (with California style greens) as they have been built or modified over the last fifteen years. As such we had the experience of different challenges of keeping both in top shape each year. The poa in particular needs to be constantly syringed and sprayed, as anthracnose is a major problem. Aggressive aeration is carried out throughout the summer to 'vent' the greens and to add better draining soils to the greens.

Each winter the maintenance crew at Pine Valley do all their own construction work. During my time there, amongst other projects, we added a new practice facility, added new tees and completed a number of major renovation projects on the old course. Late every fall, all the required heavy equipment from

bulldozers to excavators are brought in and the projects are completed by the start of the golf season. There are upwards of 50 on the entire crew during the summer but this drops back to 15-20 over the winter.

Words cannot really describe Pine Valley. It has a look that has been honed over the years but it still looks like it was always just there. The renovation projects carried out over the last number of years are more to help playability than anything else, restoring some features that have grown-in over the years. High maintenance turf sits well with the natural setting. Since the entire site is sand (hence the famous quote of it being a 130 acre bunker) it not only drains well but this is also what separates it from other courses.

The fact that the course has two of the most famous bunkers (Hell's Half Acre and the Devils Asshole) in the world says enough. Although renowned as the toughest course in the world, it is actually rather fair if you keep the ball in play. One bad shot can run you some big scores, and that is what makes it so special.

Starting a construction project was one of the most rewarding and eye opening experiences, especially in Pennsylvania. The
main permit required for construction involves storm water management. At all times during construction the site must be able to contain all of its own storm water, filter it, and release it once it's clean to protect the environment.

This was a major challenge considering how much soil had to be moved. Before construction could start, drainage ditches and sediment basins and traps had to be constructed around the site. At LedgeRock these amounted to 45 and they had to be stabilized before any further earthmoving could occur. The contractors followed detailed engineered drawings that took into account existing and future grades.

Unfortunately, due to the large amount of wetlands at LedgeRock, a number of these were not ideally placed for construction. All the drainage areas above the traps and swales had to be stabilized prior to their removal, even if they were in the way of finishing the hole. This resulted in some unique challenges like having to add valves inline on fairway irrigation runs so we could grow-in the fairway above the sediment traps and constructing greens with no surrounds etc. The final tie-in of these areas took a long time but the finished product was worth the wait.

Maintenance standards in the US are generally higher than the rest of the world. At LedgeRock the normal daily green speeds are around 11ft on the stimpmeter. The weather helps to achieve this by helping us keep things dry but also causes problems due to the temperatures that can be reached. While not typical of every private club these maintenance standards are required by the higher end clubs.

The greens are mown six days a week with Toro Flex 18s at 2.3mm. (A nice practice here is many private clubs close one day a week for maintenance work, like topdressing or solid tining and to rest the turf.) Solid rollers are used throughout the summer months to help with stress and in spring and fall the mowers are switched over to grooming units. Toro 500 mowers are used for clean-ups as their light weight prevents damaging the greens.

airways have steep drop offs. These areas require a large amount of handwork and are extremely time consuming. Fairways and tees are mowed at 10mm three days a week. The tees are mowed with John Deere 220s, and as with the greens, groomers are used in the spring and fall, with solid rollers during the summer months.

Fairways are mowed with 4x4 John Deere 3225Cs but we mow the clean-ups with triplexes as many are steep and the five-gang units were damaging the turf. The triplexes are also used on par three fairways. The triplexes and fairway mowers are fitted with groomers also and as with the greens and tees these are turned off throughout the summer. We also have verticut units for these machines to help with thatch control. We try to also ensure that all our bentgrass mowing is carried out by 10am during the summer months as to help the turf handle the late morning / early afternoon heat.


One of the other challenges facing supers in the Philadelphia area is the weather. Average rainfall is appox 900mm a year; however, it mainly falls in large quantities over a short period of time. One of the most difficult summers of the past few years was when these storms came through but the temperatures never broke.

The night-time lows were over 25C and coupled with 35C plus degree days with high humidity, the canopies never quite dried out, resulting in many courses having significant turf loss. Good water management is essential during these times, keeping the plants as dry as possible, while still keeping them alive. Syringing is essential (especially on poa) as is a good irrigation system. Luckily being a new course LedgeRock's system is the best available with Toro VP satellites, 835/855 heads and Sitepro.

There are two separate mains leaving the pump house, one for the high end of the course and the other for the lower areas, resulting in no loss of pressure.
Pest control is one of the most obvious differences between the US and Ireland. There are numerous insect problems throughout the summer. Again due to the climate, disease occurrence is particularly predominant over the summer months, with anthracnose the biggest problem on poa and dollar spot and brown patch the biggest headaches on bentgrass.

Weed control is not too much of an issue with pre-emergent applications in the spring. Grassy weeds are a bigger problem, with poa (as everywhere) being a headache on bentgrass. There are also a number of warm season grassy weeds that are very unsightly. They are reasonably easy to control pre-emergently but timing is crucial and post emergent applications can prove difficult as the chemicals are on the hotter side and can cause stress.

The budgets and resources available to American courses (especially private courses) are generally larger than their Irish counterparts. The biggest differences are the cost of labour (cheaper in the US, minimum wage $5.75, although it's increasing soon) and pesticides (larger in the US due to the greater amount of pest problems).

As memberships require higher standards of maintenance, communication and business management are becoming more and more a larger part of US superintendent job requirements.

It is extremely important to be able to relay to the membership why something can or has to be done and similarly why something they want, may not be practical or suitable for whatever reason. US golf has been struggling a little over the last few years due to the market being saturated with courses, peoples reluctance to spend money in the current economy, and more and more people wanting to spend time with family rather than be on the golf course.

These factors affect public golf more than private clubs, but private clubs have felt the strain also. Budgets are being cut while memberships still want the same standards they are used to. Some smaller courses especially in urban areas have closed for housing projects as it is easier for the owners to cash-in on their valuable land than to struggle to make a living. The GCSAA, the PGA, the USGA and others are working to get more young people into golf and it seems everything should balance out over the upcoming years.

It has truly been an unexpected journey for me with a lot of hard work and some good luck helping to get me to where I am today. Originally I had planned to stay for one year on the visa I received after graduating Penn State. Getting the opportunity to be an assistant at the number one course in the world was an opportunity not to be missed and since then, one thing has led to another, and here I am ten years later. A superintendent's life here is arguably tougher than most other places with long hours and a lot (of usually self imposed) stress during the summer months.

However, once the fall arrives it is quickly forgotten about and the summer horrors are shared with other Superintendents over a beer (or two). I do miss Ireland but the challenges over the years have opened my eyes to more than I ever thought possible. I'll leave with a thought from George Hamilton (RIP) at Penn State. In class he always joked to 'learn all we have to offer, you'll never know where you'll end up'. He was right!!