2 The Isle of Plenty - Atherton opens up

When ALS Sales Representative, Danny Jones, suggested I visit the Isle of Man, I jumped at the chance. Not only was it somewhere I had never been before, but it would give me the opportunity to continue my island hopping around the UK to check out the logistics of providing sport and recreation in remote locations.

So, armed with my notepad and trusty (new) camera, Danny and I set off for Liverpool airport for the forty minute flight to Ronaldsway Airport near Castletown.

Many of you will have a vision of the island from the TV coverage of the TT Races, watching motorbikes thrashing around narrow island roads, perilously close to 40,000 watching spectators.

It was the spirit of competition and advancement that brought the original TT competition to the island, as racing on the highways and byways of Britain was impossible, forbidden by an Act of Parliament and by the introduction, in 1903, of a 20mph speed limit!

Sir Julian Orde, the Secretary of the Automobile Club of Great Britain and Ireland (now the RAC), set off in February 1904 for the Isle of Man, because he had a fairly shrewd idea that the Manx authorities would adopt a more conciliatory attitude towards automobile racing on public roads.

So it proved, and the Isle of Man TT Races have become world famous, providing a huge boost to the island's economy every June.

But, there is much more to this island than motorbike racing.

Covering an area of 227 square miles - it is 32 miles long and 13 miles wide - the island's rugged and beautiful coastline stretches for 100 miles, whilst Snaefell, the island's highest peak at 2,036 feet, dominates the landscape.

80,000 Manx men, women and children live on the island, and they are superbly well catered for when it comes to sports and recreational facilities.

Inter town and village sporting rivalries stretch back hundreds of years, spawning over 300 voluntary sports clubs to complement over forty facilities, run jointly by the Isle of Man Government and the Isle of Man Sports Council, the two organisation providing grant aid and funding.

The jewel in the crown is the island's National Sports Centre in Douglas, a £20 million complex comprising a 500 seated athletic stadium with six lane track, a water based floodlit synthetic pitch and a large indoor sports and swimming pool complex.

There are two futher swimming pools, and several smaller indoor sports halls and outdoor synthetic pitches located at various school on the island, plus thirty municipal and private tennis clubs.

Golfers are well catered for, with eight 18 hole courses and one 9-hole course dotted around the island.

Cricket, too, is popular, with thirteen cricket clubs vying for local honours. Only four of these have grass wickets - King William's College, Cronkbourne, Vagabonds and Ronaldsway. The other nine play on artificial strips.

Such is the range of sporting facilites, in 2001 the island hosted the IXth Nat West Island Games, which attracted over 2,000 competitors from twenty-two islands, competing in fifteen sports disciplines.

Our host on the island was Mike Atherton (no, not him), the Head Groundsman at King William's School who, along with fellow Pitchcare message board poster, Ken Harding, Head Greenkeeper at Ramsey Golf Club, had encouraged our visit.

During the two day trip, we were given a fascinating insight into the island's culture and sporting life.

Mike Atherton is first up. 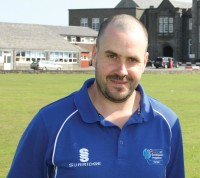 Mike Atherton, Head Groundsman at King William's College, talks about the logistical problems of island life and his plans for the future

Along with our Cricket Development Officer, Gareth Dawson, I walk to the reception to meet Laurence. He greets us with a warm handshake, along with the fine weather that he was kind enough to bring with him. Having been a Pitchcare member for a number of years, and having read many articles along the way, this was a moment that I had looked forward to for a long time.

I have been employed at King William's College for a little over eight years, having worked in a number of positions, from Assistant Groundsman, Deputy Head Groundsman, and recently found myself appointed as Head Groundsman, which has been a long time ambition of mine.

I am ably assisted (some would say 'carried'!!) by our apprentice, Josh Bowman, who has been with us for almost three years now. During particularly busy times of the year, our workforce is supplemented with temporary staff. We also operate a Preparatory School - The Buchan - which provides education for 3-11 year olds, and also has a thriving nursery which is run year round. We also have a full time groundsman who is based at The Buchan - David Moores, who has been with us for seven years.

So, first things first, what was Laurence doing on the Isle of Man? Having spoken with him at length in the past, Laurence had displayed a keen interest in the intricacies of providing and maintaining sports facilities in an island setting. Following his recent jaunt to Guernsey, it was obvious that Laurence was keen to continue with his island hopping adventures, hence him turning up on our doorstep! I had read the recent articles about Guernsey with great interest, and I felt a strong familiarity to the challenges facing the groundsmen and greenkeepers outlined in those articles.

Being a groundsman, or a greenkeeper for that matter, on an island presents a fairly unique set of circumstances that we are faced with on a daily basis.

We can look at the cost of bringing materials to the island - for a pallet of 40 x 20kg bags of, say, loam or fertiliser, you are looking at anywhere between £80 -£120 - that's up to £3 per bag - that's getting on for twice the unit price per bag for a bag of Kaloam! If we wanted to bring a 27 tonne trailer over, we are looking at upwards of £2000, and that's for the ferry alone!

As you can see, this puts a great deal of pressure on all of us, even more so for the small clubs, where funding is far from abundant. It is my long term hope that we can form a cooperative buying group on the island to reduce the unit costs of materials, and share the savings between all of the clubs.

We could also look to education, which is limited in respect of turfcare and associated activities. We are able to undertake a limited number of NPTC short courses on the island - pesticide application, hand held hedge trimmers, tractor driving etc. For vocational courses, we are lucky to be able to undertake these through Myerscough College, who visit the island regularly - Josh and I are both nearing completion of the recently introduced online Diploma in Sportsturf, whilst David is also nearing completion of the NVQ level 2 in horticulture.

This leads on to seminars and short courses. For us to attend any of these on the mainland, the cost can be very prohibitive, so few of us get to attend these types of events. Things have improved in recent years though.

In 2008, we were very lucky to have a visit from Keith Kent, the Twickenham Head Groundsman, which was arranged through the IOM RFU. Keith visited a number of clubs and schools on the island, and hosted a seminar in the evening which a small, but very keen group of us attended, and found very informative and helpful.

To follow this up, in 2009 we hosted a winter pitches maintenance course at King William's College - a total of 25 people attended, which was a fantastic turnout. We hope to run more courses like this in the near future, and will look to manufacturers to support this with demonstration days.

As for managing the King William's College site itself, there are also a number of challenges which are, in the main, brought about by our location and microclimate. As we are located so close to the sea, strong, coastal winds and salinity can lead to problems in establishing and maintaining a strong and healthy sward.

To offset this, we aim to promote strong root growth and tend to set our heights of cut towards the higher ends of the spectrum, whilst keeping the surface requirements of each sport in mind. The indigenous soil is sand dominated, which can also bring problems with nutrient leaching.

The changeable weather conditions can also be problematic for routine maintenance and match preparation, particularly in respect of cricket. We have been known to have to handle flat sheets in gusts of up to 50mph - far from easy! With the squares being Kaloam based which is, by reputation, very difficult to work with, manning the covers effectively is a critical part of our wicket preparation and, given the frequency of the rain here, can be very time consuming.

With the environmental particulars outlined above, we find it best to work with the native grass species rather than try to establish perennial ryegrass swards for our outfields, as this would be a very costly exercise in terms of both establishment and maintenance. With this in mind, we tailor our maintenance procedures to promote the survival of the native species.

We are currently undertaking our renovation on the cricket squares, which will include another application of an 11:5:5, which will be followed with a 5:5:10+Fe towards the end of the year - all of these applications have been in granular form.

Next year, we will look to supplement with regular liquid feeds - this is with a view to avoiding mower pick up, as the nature of our fixture lists dictate that there are always a number of wickets being prepared at any one time.

Manx sport, in general, is doing very well at the moment, with many of our sportsmen and women performing well on the international stage. This fact is highlighted by the recent victory by the Manx team in the Under 17s division 2 European Cricket championships, which were hosted here on the island.

This was the first time that such an event had been held on the island and, following a huge amount of work from the organisers, proved to be a massive success. It is our aim to build on this success, and take the island, in terms of facilities and, ultimately, sporting performance to the next level. 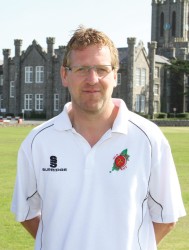 Developing cricket on the island

Gareth Dawson is the Isle of Man Cricket Development Officer. He was appointed in 2008, and his duties are to coach the IOM national teams at under 15s, 17s and 19s, plus the senior side. He also delivers a primary school coaching programme that features in the Manx Youth Games, and coordinates all the funding initiatives.
He has been successful in arranging funding for several projects, including new training facilities at St Johns, Crosby and Vagabonds cricket clubs.

He also has to produce development plans and manage budgets for ICC Europe.

Gareth's cricketing experience was honed in Yorkshire, where he began his career with Doncaster Cricket Club at the age of nine. He played in the ECB Yorkshire Premier League, and was a member of the side that won the National Club Championships at Lord's in 1998.

He was also manager of the Yorkshire under 15s and the 'B' side for two seasons, and was involved in the Yorkshire Pathways coaching schemes.

The Isle of Man hosted its first ever European competition this summer; the Under 17s Division 2 championships, which the Isle of Man's under 17s subsequently won.

Gareth is keen to get more grass wickets on the island, enabling the clubs to develop better players whilst, at the same time, finding essential resources to support these clubs.