0 The JSM Challenge Cup – your chance for glory 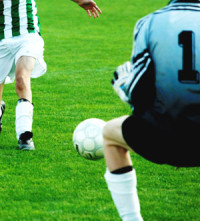 JSM Limited, the Toro & Hayter dealer covering the south-east of England, is sponsoring a day five-a-side football tournament to be held on 28th May 2008.

Entry is open to all greenkeeping and grounds care staff working for organisations located in the Company's trading area of Kent, Sussex, Surrey, South London and East Berkshire. The tournament will take the form of 10 minute matches played in 4 pools, which will generate the 4 pool winners to move into the semi-finals and then the final where the winners will lift the JSM Cup.

Says Managing Director, David Cole, ' We wanted to put on a corporate event that would not only be fun, but also a departure from the usual - allowing as many of our customer's personnel to participate as possible. To assist some of the smaller grounds staff teams, we will allow organisation to join forces to achieve the 7-player squad '.

The day will feature skills competitions, with additional prizes to be won alongside the main tournament and a complimentary barbecue will accompany the trophy presentation at the culmination of the event. Adds fellow Director, Steve Vogels, 'We would like to think that this could become an annual event, with grounds care teams vying for the JSM Cup for a few years to come'.

Entries must be in by early April and places will be limited to keep to the 4 pool format and time frame. The first matches are envisaged to kick-off at around 1.00pm with the prize giving and barbecue rounding of proceedings at around 5.30pm. More details and entry forms are available from JSM Limited, 0845 026 0061.