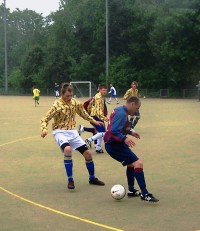 Following a well received and successful inaugural tournament in 2008, JSM Limited is once again sponsoring and organising a day five-a-side football tournament to be held on 26th May 2010. Sandwiched between the UEFA Champions League final and the start of the World Cup.

Entry is open to all greenkeeping and grounds care staff working for organisations located in the Company's general trading area of Kent, Sussex, Surrey, South London and East Berkshire. The tournament will take the form of 10 minute matches played in 4 pools, which will generate the qualifiers for the knock out stages.

Managing Director, David Cole, says 'We hope Sunningdale Golf Club will return to defend their title, well earned in 2008. The competition has been very well received by our customers - and well supported by our supplier partners as well, particularly Toro. We hope we can make it a regular bi-annual event.'

Smaller organisations are encouraged to group together with others to make up a team. The day will feature a complimentary barbecue to take part prior to the trophy presentation.

Entries must be in by early April and places will be limited to keep to the 4 pool format and time frame. More details and entry forms are available from JSM Limited, 0845 026 0061.