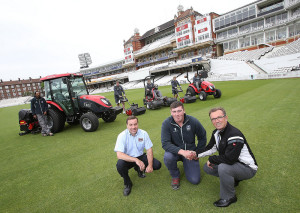 There is little point in going on about the weather in the summer of 2012.

Suffice to say the home of Surrey County Cricket Club, the Kia Oval, was rained on as much as any cricket ground in the South of England.

The challenge facing Head Groundsman Lee Fortis then was "getting surface water away".

"I decided we needed to be able to hollow core the outfields in autumn and aerate in season to help improve surface drainage," says Lee speaking in July 2013.

"Now I have the exact opposite problem to last year, namely getting enough water onto the outfields. In direct contrast to last season, we have had little rain and this has combined with some really hot weather.

Since it arrived, the ProCore864 we purchased for last year's issues has seen little use."

If buying in an expensive bit of kit would be a guarantor of dry weather, no doubt Toro would soon sell out of its well-proven 1.27m wide ProCore 864 aerators.

But Lee Fortis is glad he has the machine in his equipment armoury and says it will be pressed into use at the end of this season, hollow coring plus top dressing all being a part of improving the structure of the hard worked outfields.

"A key plus of the ProCore is its speed," he adds.

"In season we have little time to do anything other than spray and mow, so when we do have a need to do some surface aeration we have to be able to get the job done quickly and leave a finish that is ready for play.

That is why we went for the ProCore. If the weather takes a turn for the worse now, the machine is ready to go."

Known throughout the cricketing world for its all-round excellence, the 'Oval' square and outfield are subject to critical scrutiny, both professionally and by huge TV audiences internationally.

This does not seem to worry Lee but he clearly demands a top finish from his mowers.

"We were a few years behind other sports venues in terms of machinery.

I wanted to improve the aesthetic appearance of the ground and I decided to start with investing in new mowers and other equipment."

The pitches are first mown with Toro 1000s and then a pair of Toro Flex 21 pedestrian mowers, a tight and quality cut obviously being absolutely critical in International cricket.

For the outfield, Lee Fortis was looking for a mower that would produce a really top level finish but with the output to deliver higher work rates in a season where grass can "get away".

"I cannot fault the TriFlex mower's quality of cut or its output. It can mow at speeds of up to 5mph and it leaves a really good finish.

I am also impressed with the support we have from Toro.

We are under pressure to ensure the ground is presented in excellent order for both county and international matches. Support is every bit as important as the machines which is a key reason why I choose Toro."