0 The King of Radley College

Radley College is an all-boy independent boarding school numbering 670 pupils aged 13-18. It sets out to provide a good all round education and sport is a key part of that. 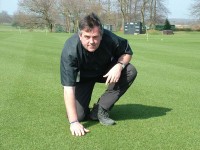 Pupils play sport four days each week plus matches on Saturdays. So, the grass pitches at Radley have to withstand a tremendous amount of wear and tear due to the frequency of sport played in term time.

The grounds and gardens at Radley are managed by Adam King, who oversees a team of fifteen full-time staff plus an extra two over the summer: ten are dedicated to care of the sports grounds and seven to the gardens. He has been at Radley since 2001, and previously worked at Woodbridge School and Stowmarket golf course, both in Suffolk.

Radley has twelve full-size rugby pitches. After Christmas these are converted to six grass hockey pitches and seven football pitches. For the summer term, eight cricket squares and ten grass nets are prepared.

In addition to the conventional sports played, Radley College also boasts a 9-hole, par 34 golf course for pupils, which is also open to a membership of around 500 golfers who play on restricted tee times.

As pupil numbers have increased, the college are looking into the possibility of extending the current facilities by adding an extra five hectares of sports pitches. 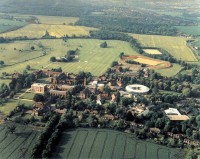 Radley College is situated four miles south of Oxford. The native soil is a sandy loam. However, it is an exposed site and suffers hard frosts and cold winds. In fact, during the winter, it can be 6°C colder than London.

Ironically, last winter, the cold weather helped keep the pitches in better condition, as Adam explains: "Pitches came out of the winter still with a good 70-80% grass coverage - thanks, in part, to the snow which kept pupils off the pitches and gave the grass three weeks of rest. So, for the March renovations, we were able to cut back on the amount of seed used when overseeding."

For convenience, Adam chooses to use an amenity contractor for all seeding and overseeding. Nine of the twelve pitches were overseeded with MM60, a 100% perennial ryegrass Headstart-treated mixture, with only the 18 yard boxes requiring treatment on some of these pitches. For the previous two years, a blanket covering of seed was required.

"Using treated seed gives plants a two to three day headstart on germination" explains Adam. Any advantage like this is a benefit as, in around three weeks, it will be cut down for a cricket outfield. It also gives seed more energy when it does germinate. In dry springs, it takes the plants through the drought, whereas ordinary seed can fail and die away."

"Choice of grass mixture is an important factor in maintaining good pitch quality," says Adam. "Frequency of play is almost daily during term times. It's trampled on for six months of the year - first cut at 25-50mm for rugby and then cut to 19mm for hockey. Then, for the cricket outfields through the summer months, it has to withstand high temperatures and dry weather at only 12mm." 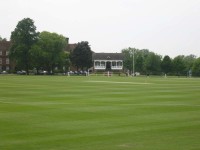 Summer term finishes on 4 July, but the cricketing continues through to mid-August. During the school holidays a whole host of organisations use the grounds including the Oxfordshire County U17, the Middlesex Academy, London-based charity Capital Kids, and local village teams.

This year, for the first time, the cricket outfields will be oversown in July at a rate of 10g/m2 with MM12, which contains 25% smooth stalked meadow grass and which requires higher soil temperatures to germinate than perennial ryegrasses. The species is rhizomal and, so, should help improve recovery time and wear tolerance.

"Grass for cricket pitches needs to have a vigorous rooting system" explains Adam. "Ground preparation involves taking a lot of moisture out of the soil and then compacting it. So, plants need to have enough energy in the leaf to recover. Everyone wants fineness of leaf for playability, but I get better recovery from a slightly broader leaf. Adding a liquid feed through the season is essential." 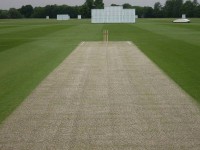 On the squares, a 100% perennial ryegrass mixture, MM50, is used, which this year includes the new cultivars Malibu and Venice. The nets area was overseeded two years ago with 100% Melbourne, a new perennial ryegrass cultivar, on a trial basis as, at the time, it was only on the winter sports STRI lists. It was played on in June 2008, and proved to have a good rooting system, and held together and recovered really quickly.

It has now been officially trialled for the summer sport STRI lists and is in the top ten. "We had good grass coverage, no crowning and it cut down neatly with good recovery." says Adam

For this year, an even newer perennial ryegrass variety, Madrid, is to be trialled on the cricket squares, so its performance can be evaluated in genuine playing conditions. Madrid is the top-rated variety on the STRI winter sports lists, and scores highly on the summer sports lists. 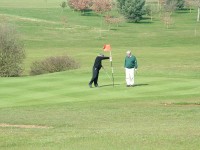 The 9-hole golf course was established in 1982, and became open for public membership in 1990.

Adam is working with the STRI's disturbance theory. "We're at stage 1 - positive disturbance - verticutting, spiking and topdressing, to keep the surface dry and open. Overseeding is carried out three or four times each year using a low rate, 4g/m2 of MM9, which is a 100% browntop bent mixture.

"It's a slow process and, in a few years, we will probably be much better informed. It's also a situation which is specific to individual greens, so we are always looking at different varieties and mixtures to find what works best where."

Independent schools, with a focus on sport, put their pitches under an immense amount of wear and tear. Compaction is a massive issue and grass mixtures need durability and good recovery.

Adam King dreams of a 'miracle mixture' - "just one mixture which can be sown everywhere to cater for all sport types and all sward heights, and still provide excellent playability and robustness."

In the meantime, he constantly seeks out new cultivars, mixtures and methods, to support the College's varied demands on the sports grounds.

Who are you? Adam King, Grounds Manager at Radley College.

Who's your hero and why? Ian Botham, an all time great on and off the field.

What is your dream holiday? Barbados, watching cricket and playing golf.

What annoys you the most? The weather!

What would you change about yourself? Nothing!

Who wouldn't you like to be>? Gordon Brown, for obvious reasons.

Favourite record, and why? Meatloaf's Bat out of Hell - every track is a great singalong.

Who would you choose to spend a romantic evening with? My wife.

If you won the lottery, what is the first thing you would do? Play golf at Augusta.

If you were to describe yourself as a musical instrument, what would you be and why>? A bass drum - big and loud!

What's the best advice you have ever been given? Apply for the Radley job.

What do you do in your spare time? Play golf and spend time with my family.

What's the daftest work related question you have ever been asked? Why is the pitch wet?

What's your favourite piece of kit? The Lloyds Paladin.

What three words would you use to describe yourself? Bloody nice bloke.

What talent would you like to have? To hit a golf ball straight!

What makes you angry? Shoddy work.

What law/legislation would you like to see introduced? Ban politicians.