Richard Campey started his working life in farming, before taking a career change to join ICI. In 1976, as a twenty-two year old, he moved to SISIS, working under the redoubtable Eric Staniforth, founder of the company. It was here that Richard fell in love with turfcare machinery. He was able to travel the world as a sales demonstrator, all the time learning from his straight-talking mentor.

In 1986, Richard decided that it was time for a change. He set up his own company, Professional Turf Care, to carry out sportsturf contracting in and around Manchester. It was a lucrative area and it was, at the same time, that Richard saw a niche in the secondhand machinery market.

Richard moved to his present location, just outside Macclesfield, two years later, and the company and premises have gradually expanded year on year. His regular dealings with customers in the secondhand market led to him fulfilling local demand and, eventually, taking on new machinery stock.

Richard said, "We were far too small a company at the time to take on products from the big three, but we did have a chance to work with some of the smaller manufacturers. I was down at Saltex in 1989 looking at an Australian Coremaster, when Colin Gregory jumped out at me. 'You'll be after buying one of these then Richard?' to which I replied, 'it looks like a machine that will make us some brass, but unfortunately I haven't the funds to buy it.' Colin said, 'don't worry about that ... and you'll be needing an Iseki tractor to pull it too!' Ever the opportunist is Colin!"

"Well, that was that. Suddenly I was dealing in new machinery. We next took on the Lesco range and, in the first year, sold thirty-five machines in the North West. But, I was struggling to cope so, in 1990, I took on Ken Heath, who I knew very well from my SISIS days. Ken had retired, but was still passionate about the industry and looking for some part time work. Tony Cundall also joined us as a sales rep at this time. The other key member of the team back then was Jane Middleton, a local girl, who started doing my bookkeeping. She is still with us as Company Secretary to this day!"

"In 1994, Iseki went to Massey Ferguson, so I approached New Holland/Ford and became the local dealer for them."

At this time all the machines that Richard was promoting, demonstrating and selling were under dealer licences. 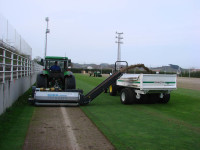 Richard is always keen to attend equipment shows, both at home and abroad, and it was when he was over Holland in 1996, that he first saw a Koro machine.
"I was very impressed with the machine's simple, yet effective, design and, as a contractor, I could immediately see a good market for them."

In that same year the Koro Field Topmaker was stripping off the first football pitches in the UK, courtesy of Richard.

Next to catch his keen eye was the Dakota range of topdressers and, in 2001, a distribution deal was agreed, but this time with European rights included. In addition, Campeys added to their own Raycam range of innovative products, including Hi-lift Trailer, Striegel Harrows and Speedresser large capacity drop spreaders.

The contracting side of the business was sold to Souters in 2005, although a close working relationship still remains. This sale gave Richard and his team the opportunity to concentrate on selling products, as well as freeing up much needed space at the premises for more new equipment.

What stands out, above all else, is Richard's ability to recognise an opportunity when he sees one, and turn it into an industry standard. He has a gut feeling for the business he is in, acquired not just through experience but through natural instinct. He is not afraid to challenge existing methods if he believes they can be improved on, and will use whatever influence and power of persuasion to get his machinery in front of the groundsmen and women responsible for maintaining sports pitches across the UK and Europe, with enormous and lasting effect.

Prime examples are the Koro Topmaker and Recycling Dresser. The impact on the way pitches are managed today is profound; 'koroing' is now a recognised generic term and the Koro Topmaker enjoys a highly respected position in the world market of pitch renovation, leading the way for further innovative product, including the Imants Shockwave and Rotorknife. Dakota Turf Tenders have gone from being unheard of in 2000 to the present day, where they are a highly recognised and respected brand.

The decision by Dutch manufacturer Imants BV to take over the manufacture, marketing and development of Koro-Systems in 2009 provided Campey Turf Care with another major opportunity for expansion.

In February 2010, the close association between Campey and Imants in the UK was consolidated further with Campey being appointed official distributors for Europe, the Middle East and Africa. 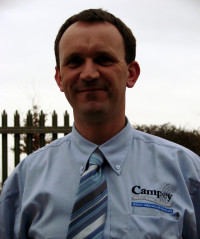 This association is proving to be a winning combination as interest in the Imants range has far exceeded expectations, particularly in light of the global recession. This has brought renewed enthusiasm and interest to an existing range of equipment.

Likewise the Koro Recycling Dresser, Topdrain and Cultiroll are now being promoted in new countries alongside the hugely popular Koro Topmaker.

So, a company that initially started out as a business offering sportsturf maintenance work within the North West, has now grown to be one of the UK's leading independent distributors, with machinery available to customers across the globe.

By surrounding himself with qualified, experienced, professional people, Richard has ensured the company's interests are well served - there won't be many readers who don't know Simon Gumbrill, Richard's right-hand man and now Sales Director, Ian (Poggy) Pogson, who was coaxed out of retirement to add his considerable experience to the team, or the experienced hands of David Briggs. The appointment of David Harrison as Export Sales Manager in November 2009 is another to add to the list.

Marketing across country borders brings its own unique challenges and the European demonstration tour, which took place 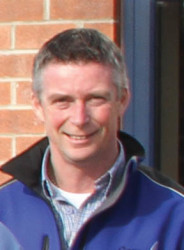 in 2010 over a period of seven weeks, was no exception. It provided a unique opportunity for anyone involved in sportspitch maintenance to view a whole range of renovation and maintenance machinery at work.

Richard Campey believes that this open approach of taking 'the mountain to Mohammed' is why they have become so successful. "We don't shy away from a challenge, and the team put in 100% effort; from the office staff that organised the logistics of each event to the men who conducted the demonstrations."

"Our goal," continued Richard, "is to cross the language and cultural divide, and to discover and adopt good working practices in sportspitch renovation and maintenance." The roadshows were just one example of how the Campey team share knowledge and demonstrate expertise in our industry.

This ability to judge which markets to develop and to source new and innovative machines for the job, manifests itself through a dedication to encouraging best practise, extending well beyond machinery into education. Campey Turf Care works closely with recognised sporting bodies such as the IOG, FEGGA, BIGGA and the STRI, all of which look to ensure that the future of groundscare remains high on the political agenda, despite recessionary pressures on the budgets of local authorities and private sporting facilities.

The passion for the industry, gained from his early mentors Eric and Ken, has obviously rubbed off on Richard, who talks with immense enthusiasm. "I want to see the quality of sportsturf improved, but my biggest bug bear is the local authorities 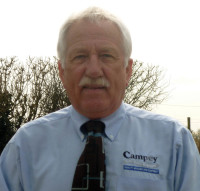 . Standards need to be raised. People bang on about the Olympics changing the industry's perspective but will Joe Public learn more about the work we all carry out? No."

"Education needs to start in schools, with more work experience offered. This year we have invited local schoolteachers to a tour of our premises. They can then see, at first hand, what we do and, hopefully, will go back to school and encourage some of the kids to get involved in our industry in the future."

"I thoroughly enjoy what I do and like to keep 'hands-on'. We continue to develop new ideas and concepts that will benefit the work of groundsmen and greenkeepers. As a company we are always ready for fresh challenges."

You would have to say that Richard Campey has come a long way since he took those first tentative steps back in 1986.

If you are interested in attending the Campey Open Day on 7th July you can register at www.campey25.com

Campey Time Line
1986 - Set up Professional Turf Care as a contractor and used machinery dealer with a £15,000 loan
1988 - Purchased the land and premises at Marton Hall Lane. Company still based here today
1989 - Entered the new machinery market with Australian Coremaster, Iseki tractors and the Lesco range. Jane Middleton joins the young company as Company Secretary
1990 - Took on Tony Cundall as Sales Representative
1994 - Changed to New Holland Tractors
1996 = Introduced the KORO machines to the Groundscare industry
1998 - Won the sole KORO distribution rights in the UK and Ireland. Simon Grumbrill is taken on as Sales Representative for South Yorkshire, Derbyshire, Staffordshire and the West Midlands
2000 - Introduced the Dakota range of Turf Care equipment from the USA. David Briggs joins the team as Sales representative for UK and Europe
2004 - Sales team expanded further with the appointment of Ian Campbell as Product Specialist for North Manchester, Lancashire and West Yorkshire
2005 - Took the decision to close the contracting side and sold contracting business to Souter Sports
2006 - Spare parts side of the business is expanded to meet a growing demand. Simon Gumbrill promoted to Sales Director
2008 - Ian Pogson comes out of retirement to join Campeys and use his vast industry sales knowledge
2009 - John Campey takes over the running of JC Machinery - the Agricultural machinery arm of Campey Turf Care
Brian O'Shaughnessy employed to develop the market in Ireland and David Harrison appointed Export Sales Manager to expand the global markets
2010 - The relationship with Imants was consolidated with Campey being appointed official distributors for Europe, the Middle East and Africa - for Imants and Koro by Imants range Julia Campey appointed Marketing Co-ordinator for the Campey Group assisted by Mandy Caton
2011 - Mick Parks reaches the 20th year working for the service department. His current position is Outside Service Engineer