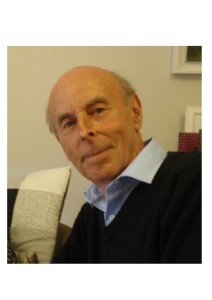 This year is the LDCA's '30th Anniversary' and Bruce Brockway has been Secretary of the Land Drainage Contractors Association for most of that time. He was asked to take over the LDCA in 1987 and run it from his then base at the National Agricultural Centre where he was Director of an Information Centre.

He was trained in Agronomy and Estate Management, and after spells at Reading University Farms, and the Grassland Research Institute, and in management at a 3000 acre heavy boulder clay estate in Essex, he was well versed in the science and practice of soils and water.

LDCA drainage contractors had to diversify and drainage of sportsturf as well as other amenity areas was an obvious activity where they could put their experience and expertise in soil and water management to good use. Now with some thirty years of experience, coupled with the development of specialised sportsturf equipment and techniques for piped and secondary drainage, LDCA contractors can claim to include the leading constructors of turfgrass sports facilities in the UK and Europe. 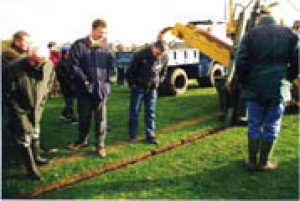 As a Trade Association for contractors the LDCA is a Standard Setting organisation publishing industry standards for agricultural and sportsturf drainage which member contractors undertake to work to.

Bruce says the sportsturf industry should be proud of how much the standard of sportsturf facilities has improved over last 30 years and drainage contractors have played a key part in this. One has to look not only at the prestigious venues for golf or winter games seen on television but also watch or play at local clubs to compare todays surfaces to the mud bath that was an all too common sight 30 years ago.
The LDCA is also active in education and training, and disseminating information to promote good practice.

Bruce sees education as a useful way of promoting good drainage. As well as educating those in the drainage industry, there is a need to educate the customer be it sports clubs or local authorities, and the users be it golfers or footballers in the fundamentals of drainage not only so that they are more aware of how their facility is constructed, but importantly when they have drainage installed they know what to look for in drainage design and installation. 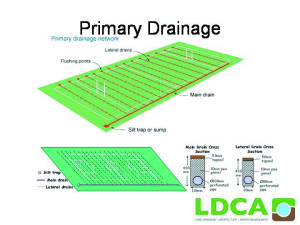 Also so that they appreciate what maintenance procedures need to be carried out by their greenkeepers and groundsmen to maintain efficient drainage. The LDCA has already opened up its drainage courses to non-members and has interest from across the sportsturf world, and even from farmers as sadly drainage receives little coverage in most agricultural colleges now and there is a new generation of farmers who are unfamiliar with drainage.

The other area Bruce would like to see more integration is in the separate worlds of irrigation and drainage. Both are integral to water management but are often regarded in isolation from each other.

Recycling of drainage water for use as irrigation is an example of a common interest. He feels the two industries should do more together, perhaps for example by running joint education and training courses to cover irrigation and drainage - so watch this space.

He feels important current topics in sportsturf drainage include the use of conservation drainage techniques to control the water table and bio filters to reduce nitrate pollution where sportsturf's record is not good, SUDS and local authority requirements for attenuation of drainage water particularly on winter games pitches, approval of discharge rates from drainage water and run off from sports surfaces, and the increasing requirement for planning permission to install sportsturf drainage. These will all be issues facing the industry and occupying the LDCA in the future.

Bruce says he recalls discussing his appointment as Secretary over lunch at his home with the then LDCA Chairman - so he attributes his appointment solely to his wife being such a good cook! 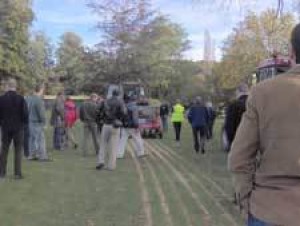 He says when he took over the LDCA he didn't expect to be still running it 28 years later. He says this is primarily because LDCA drainage contractors are such an enthusiastic bunch of people. This makes the job so rewarding. They take the job very seriously and are extremely professional in what they do.

Many members enjoy meeting together and the LDCA has developed a very active programme of meetings designed to provide technical interest but also an informal setting for useful exchange of information between members. These members meetings and social weekends for members and partners are held throughout the UK and sometimes overseas.

As well as visits to manufacturers and suppliers of drainage equipment and materials, they have also included such things as going down coal mines, up cable cars, visiting castles and gardens, medieval banquets, boat trips, and sampling vineyards and distilleries - always popular!

Bruce says sometimes the Secretary's job is like being a tour operator! Perhaps partly because of the nature these meetings, unusually for a trade association, there is a strong sense of camaraderie between the members which results in them readily sharing information and sometimes working together on projects and utilizing each other's equipment.

The latest event was the 'LDCA 30th Anniversary' celebrations held in L'Derry Northern Ireland over three days in February. 80 Members and wives and partners were welcomed with a Civic Reception by the Mayor of Derry in the Guildhall where the LDCA AGM was held. Guest speaker at the AGM was Northern Ireland based Dr Ian McClements from STRI with a fascinating account of his work in preparing pitches for the World Cup and tournaments elsewhere. 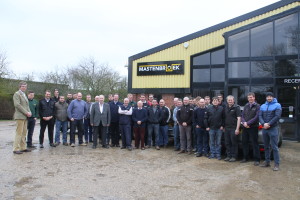 Mind you for Ian and Bruce the day had started earlier at 6.00 a.m. with a live interview on BBC Northern Ireland, and finished at 3.00 a.m. the next morning after a gala dinner with Irish music which had everybody reeling and rocking through the night! Secretary finally got to his room which overlooked the Guildhall clock tower which said 3.15 a.m! All part of the job! Everybody up the next morning for a conducted tour or the City Walls, the Peace Bridge and history of L'Derry both ancient and modern including the troubles in the Bogside and the reconciliation that has followed.

Bruce describes it as another typical weekend for LDCA Members - bit of technical - bit of culture - bit of fun - a chance to compare notes with other contractors - and to talk about drainage!

Bruce says part of the continuing novelty of being Secretary of a small Trade Association like the LDCA is that no two days are the same. Conscious that he is often the mouthpiece for the industry, he recalls one week when on Tuesday he had a meeting with a Government Minister from DEFRA, Wednesday he was speaking at a conference, Thursday he was standing in a queue at a post office to buy some stamps for an LDCA mailshot!

Such is the contrasting up and down life of the LDCA Secretary!