0 The Lawn Company landscapes for girls 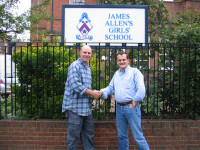 Over 700 schoolgirls will be playing hockey and five-a-side football in landscaped surroundings this winter for the first time in over two years.

James Allen's Girls School in Dulwich, South East London had an artificial turf combined hockey and five-a-side football pitch installed in 2004 which is used not only by pupils but hired out during evenings and weekends to the local community.

"It's a sand dressed artificial surface which works well and stands up to heavy use," says Head Groundsman Peter Hammer. "The problem was that the soil and subsoil which was dug out when the site was excavated has remained dumped around the perimeter of the pitch making the whole area unsightly." Peter, who has been at the school for 14 years and is in charge of approx. 20 acres of sports grounds and gardens as well as the artificial pitch, hired The Lawn Company this autumn to landscape the pitch surrounds.

"The company's sister operation Weed Free has been spraying here, applying a selective weed killer to about three hectares of sports grass every May for the last five years," Peter continues. "Because we knew them, and had confidence in their work we asked them to landscape the artificial pitch surrounds."

The Lawn Company applied a total Glyphosate based weed killer to the whole half-hectare area at the beginning of September, before stone burying, cultivating and creating softly undulating humps to comply with planning regulations which demanded that the pitch be shielded from view of surrounding neighbours.

M. D. Mike Seaton says that over the last two years the site had become heavily weed infested. "Weeds such as Fat Hen were proliferate and grasses had grown over knee high," he recalls. "Once the drought was over weed growth increased dramatically." By the beginning of October the area was ready to seed. "We have applied a pre seeding fertiliser and a grass seed mixture suitable for the specified minimal maintenance regime," Seaton continues. "If the warm soil conditions stay with us the new grass should be ready for mowing within six weeks."

At this point Peter Hammer and his team will plant trees and shrubs to complete the scheme.

For further information on the landscaping services of The Lawn Company, contact them on Tel: 0870 442 7475 or visit their website at: www.lawn.co.uk