0 The Lawns at City Hall get Inturf makeover

The lawns at City Hall get an Inturf makeover 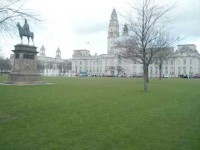 Inturf have just laid turf at one of the most important landmarks in Cardiff, in time for the city to celebrate being the "Capital of Wales" for the last 50 years! The Inturf team returfed the lawns in front of the City Hall, after the "Winter Wonderland" had closed in January, 2005.

Over the Christmas period, the ice skating rink had been the centrepiece of the "Winter Wonderland" and proved very popular with the skating enthusiasts who had braved the elements. Once the ice rink, fairground and other attractions had been removed, the magical atmosphere was gone leaving just an area which needed to be re-instated to its former glory and Inturf won the contract for this job. 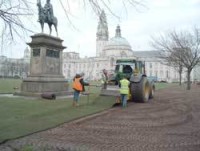 After this project was completed, Inturf were pleased to have done its bit to give the centre of Cardiff a makeover, in readiness to celebrate its 50 years as being the "Capital of Wales"!! CONGRATULATIONS CARDIFF!!