0 The life of Riley at Wallsend Boys Club

Wallsend Boys Club in North Tyneside has gained a formidable reputation for the early development of many professional footballers, including Alan Shearer, Michael Carrick, Steve Bruce and Peter Beardsley, to name just a few. Lee Williams met up with Site Manager Ian Riley who, along with his other responsibilities, is also the club's groundsman. 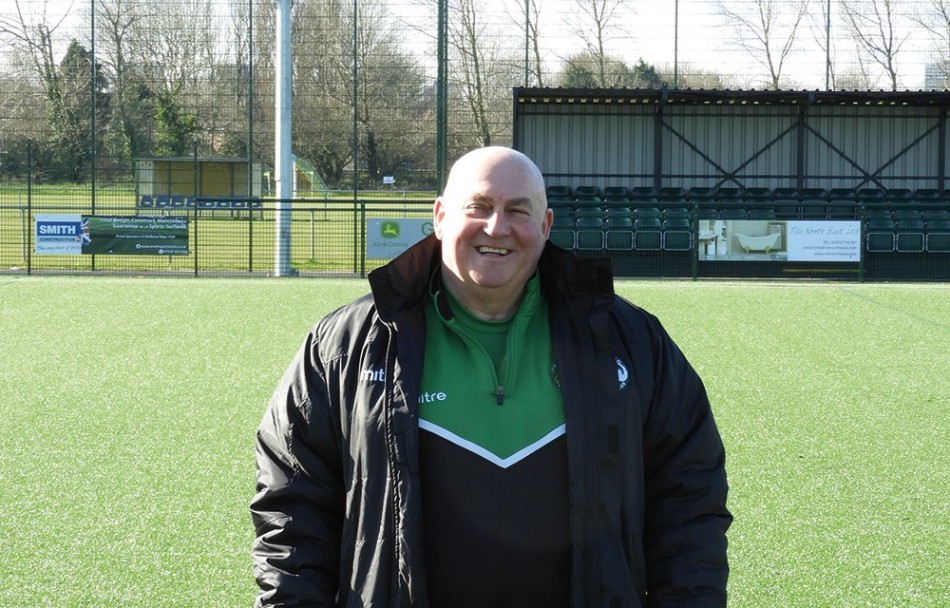 In June 2011, Wallsend Boys Club opened its first football centre alongside the Wallsend Sports Centre. Prior to this, they had been playing on park and local authority pitches. The new centre provided two senior grass pitches, five junior grass pitches, one mini-soccer grass pitch and a changing pavilion. It was funded by grants of £850,000 from the Football Foundation, £150,000 from The FA and £301,000 from North Tyneside Council, with the club itself raising £114,000 towards the scheme.

Ian Riley's first involvement with the club was as a player at the age of fifteen. Later in life, he found himself back at the club with his grandsons and fell into the groundsman's role. "I worked for Imperial Tobacco," Ian explained, "and took early redundancy when I was fifty years old. I then started working for myself, as a handyman fitting kitchens and bathrooms and general repairs, whilst volunteering as a coach at the club."

Then, in 2010, the club suddenly realised that they needed a groundsman! "You may get all these grants to improve pitches but, at the same time, they need to be looked after," commented Ian. "So, I started cutting the pitches part-time, getting paid twenty-five hours a week, but working seven days a week! But I do it because I love it. I also run the canteen, but we have recently employed some extra staff as there was just too much for me to do. Also, I coach here, and I successfully took my under-eights up to under-elevens; we have won the league each year and remain unbeaten. This has led to me becoming lead coordinator for the football section, so I'm now organising the football managers and coaches at the club." 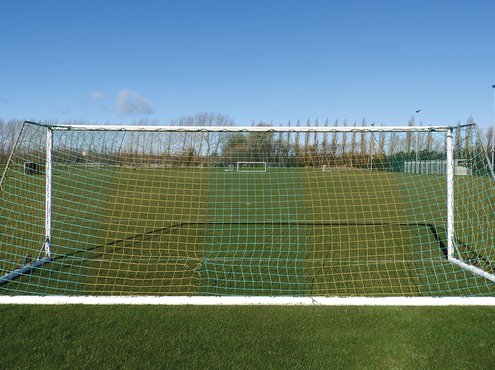 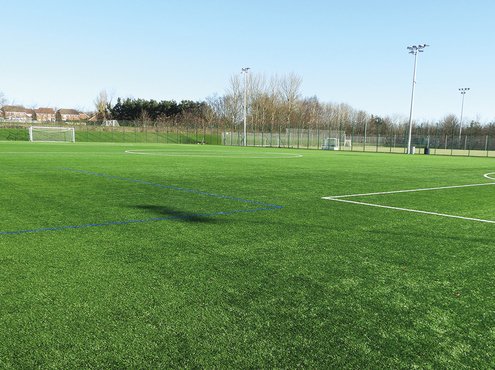 Ian had no previous experience of maintaining grass and synthetic sports pitches but, over the years, managed to improve the pitches in 'leaps and bounds'. "I have completed the IOG Level One day course, but I have no other official qualifications. I depend on what I have learned from those professionals around me at Northumbria University and South Shields, I will knock on anybody's door for advice if I have a problem. A lot of stuff I will figure out myself, but Mark Robertson from Agrovista Amenity also comes in to take regular soil samples and provide me with sound advice."

Being site manager, Ian is not only responsible for expenditure on the pitches. "I look after ordering of all the kit and equipment for our thirty-six teams. I also carry out all ordering for the maintenance of the pitches and the stock for the café, as well as keeping the day to day accounts up-to-date for both the senior men's and ladies' teams. These are then passed on to John Percival, recently brought into the club as Facilities Manager, who transfers them to our accountant."

The club is growing and needs to look at expanding their facilities in order to cope with demand from the local community. "We recently had planning permission passed for stage two of our project to redevelop and expand our existing building, adding a second floor. This will provide a community hub area along with a physio room, classroom, changing rooms, kitchen, office and meeting room. The hub will focus on activities for younger people but will also cater for everyone in the community. Once we have completed stage two, which will cost around one million pounds, we plan to seek funding for stage three, which will include an indoor 3G Futsal arena."

Helping Ian look after the pitches is David Gallagher, an apprentice groundsman who previously worked for North Tyneside council. David is working towards his NVQ in Sportsturf and regularly has a college tutor visit him to check on his progress. Last year, he was runner up North Tyneside Apprentice of the Year.

The site covers fifteen acres which includes all the grass pitches mentioned previously, along with a new, full-size 3G pitch. "The site was closed for nine months whilst the reconstruction of the pitches took place."

All pitches have full drainage but, like many other sporting venues up and down the country, the club has struggled to get fixtures played. "Some people reckon we have issues with the drainage, but I don't think so. We are no different to any other club at our level. We have had a lot of rain and, in all honesty, if they are wet, I will not let them play on them. I am not going to have them wrecked unnecessarily. We are lucky enough to have a full size 3G, so we have played a lot of our games on there to ease the pressure on fixtures."

When the grass pitches are available for use, they must accommodate a lot of wear with training three nights a week and matches played on Saturday and Sunday.

Ian talks me through the monthly maintenance of the 3G and grass pitches. "We brush the 3G ourselves three times a week so we can keep it in tip-top condition with the amount of use. Every six months, we have a contractor come in to deep clean the surface and spray for weeds. 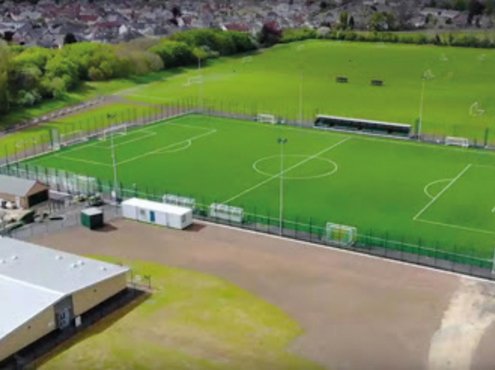 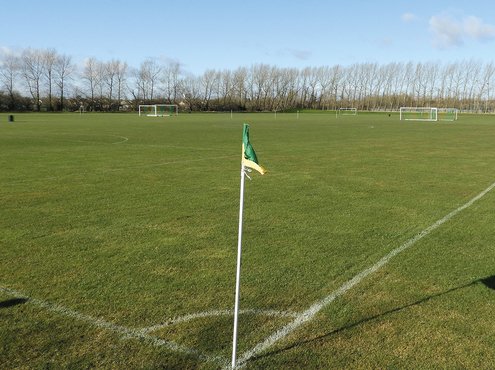 We must look after it, so we have some strict rules in place like no metal studs, no food or hot beverages and, if I see anyone not following these rules, I politely ask them to obey our rules."

"To cut the pitches, we use a John Deere 2653 triple cylinder mower and a John Deere X Series ride-on-rotary mower, which are both set at the height of 25mm. This does not change all season. For most of the cutting, we will use the rotary mower as it's quicker. Then, for match preparation, we use the triple to provide a cleaner cut and a nice stripe. We do roll the pitches quite a bit, switching between the wider heavy solid roller and the smaller sorrel roller throughout the season to keep the levels. If we get the time, we will go over the pitches with dragmats to remove the dew from the grass to help with disease control."

Ian likes to bring in an outside contractor at least twice a season to verti-drain the pitches at a depth of ten inches to keep the link from the surface to the drains.

Renovations are carried out each year on all the grass pitches in the second week of June, after the football trials have finished. "This year, we will scarify the pitches ourselves using the Wiedenmann Terra Rake we purchased through a Northumberland FA scheme called Pitch Perfect. Then we will get the contractor to come in to spray with a selective weedkiller - T2green - and Xtra Sol 46:0:0, a liquid feed. Following this, they will verti-drain, topdress with medium sand and overseed with the Vredo disc seeder using CC Renovation, a seed mix with a Tetraploid. Finally, we will apply Marathon Sport Pre-Seed Repair, which is an extended-release fertiliser."

The pitches are fertilised five times a year, depending on the weather and the readings from the soil test results. "We tend to use granular feeds like Marathon Sport from Agrovista Amenity, which is an organic, slow-release product. We have seen some great results over the years with this product, improving the density of the sward and the root system."

"Machinery has been purchased outright through various sources over the last nine years. We originally bought a piece of machinery off eBay which wasn't the best, and we have purchased second-hand machinery from golf clubs. The John Deere ride-on was purchased through the Pitch Perfect scheme. The rest of the machines were purchased through the father of one of our young players who owned a local John Deere dealer, Greenlay Ltd (which has recently been bought out by Thomas Sherriff & Co Ltd), and we got some great deals. We are still using the local dealer to undertake all our servicing and to purchase parts for the machines."

Ian tells me next on his list of machinery purchases would be a bigger tractor, followed by a verti-drain and various other three-point linkage attachments. "It would just give us that little bit more flexibility and help us take the pitches to the next level."

Ian's talents don't stop at looking after pitches; he is also a dab hand at putting up fences and gates around the site. He also built the on-site garage with favours from different people and, after it was recently broken into, adapted some spare fencing to help secure the main door. Is there no end to this man's talents? 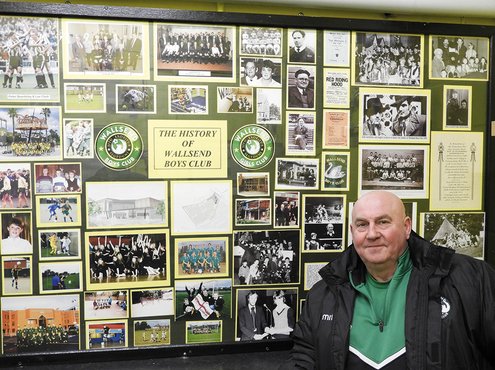 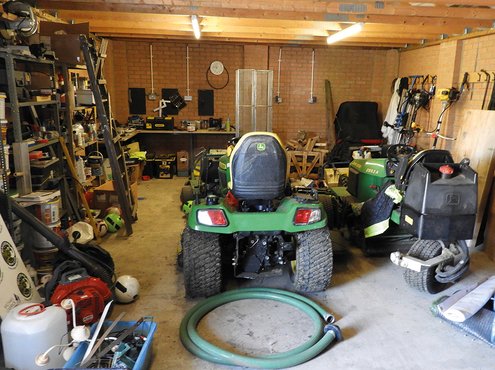 Wallsend Boys Club was founded in 1904 by the employees and directors of Swan Hunters Shipyard in order to provide recreational activities for the apprentices and young people in the area and initially specialised in boxing.

The original club premises were a series of wooden huts on Station Road, erected by workers from the shipyard. A fire destroyed the original premises and work commenced on the current club building in 1964, which was opened on 16 December 1966.

Over the years, the club has survived fires and weather damage and, despite the building being burnt down and rebuilt, then damaged and demolished, the very soul and heart of the boy's club has lived on.

In 1975, the club opened seven days a week and formed a separate sub-committee for 11-a-side football.

In 2008, the club was awarded the Freedom of the Borough of North Tyneside, in recognition of what the deputy mayor called the club's "factory line of talent", and for its community work.

In 2011, the club opened its first dedicated football centre.