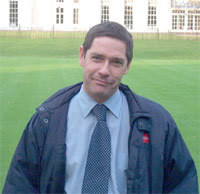 The fantastic weather that we have all enjoyed this year has meant the courts have been played on regularly throughout the summer. The courts now show heavy wear on all the base lines. This year has seen more use of the courts than I can remember.

We are now looking forward to September, and as much as we try to share the wear around the courts, the heavily used appearance is to be expected.

The courts will be fed now with their last summer feed. I use a Scotts company fertiliser comprising of 12:0:12. However my feeding programme is governed by regular soil analysis results, which have shown a potash deficiency, and adequate phosphate levels. This last high nitrogen feed, applied now, will be sufficient to carry us through until after renovation and the new seed germination on the courts.

I prefer to use straight release fertilisers, not slow release versions. I may be old fashioned but I prefer to be in control of what goes down, not be beholden to a prill that is temperature or moisture reliant. I also feel that if you have a slow release granule sitting on the soil surface, it is likely that some of the mechanical operations performed can flick it out of the sward and into a grass box.

I also like the use of foliar liquid feeding, there are some interesting products on the market, and there is one in particular that I hope to trial. It is a foliar feed that apparently enters the plant leaf through the trans-cuticular pore spaces and not the stomata. Quite often the stomata, which are large holes in the leaf, are closed due to weather conditions, whereas the trans-cuticular pore spaces, which are much smaller holes, remain open. This may just be a great sales pitch, but with so many new products becoming available, the scientific theory here certainly sounds credible.

We tend to cut all the courts at least twice a week, if not three times. The courts are cut at 8mm all summer, which is a manageable height. As we don't do any aeration on the courts during the playing season, I don't want to encourage any more stress to the plant than is necessary. By leaving more leaf on a pure Rye grass sward, the plant doesn't have to work so hard to recover from bruising. If it were possible to do some aeration, then we could lower the cutting height down a little bit.

We aim to brush the courts to remove dew each morning, but with staff levels this isn't always possible, however this operation on the Rye tennis courts isn't as vital as removing dew from our bowls and croquet lawns that have much finer grasses on them and are brushed every morning.

Unfortunately we haven't had the time this year to carry out any verti-cutting on the tennis courts, something that I would like to address in the future. The courts would certainly benefit from this work, in keeping the surface clear of dying and decaying organic matter and allowing the surface to breathe.

We have groomers on all our John Deere cylinder mowers which act in part as verti-cutters, but next season I hope to purchase a ride on John Deere 2500 triple cylinder mower with a set of thatch away reels. This will, for the first time allow us more time to carry out more regular thinning out of the sward.

Whenever we do light scarification with our Little John machines at the moment, we have to use two staff, one to scarify, one to brush up any excess debris behind. The machines are only 600mm wide, so it becomes a very slow operation that we can ill afford, with the numerous other daily duties that are undertaken.

Part of our nutrient program has included a Sea Nymph, seaweed program that has been applied on a regular monthly basis throughout this summer. It will take at least six months for this series of applications to take effect, but I hope to see a large improvement in root growth.

The weather has highlighted a dry patch problem, and we have started to use wetting agents in conjunction with hand forking to

I have decided not to overuse the wetting agents, primarily because I have started a programme of stripping off the court surfaces using a Koro machine. Two years ago we did the blocks of courts A and B, last year we took the top off all of our match courts and this year we will be doing blocks C, D and probably F. We have enjoyed fantastic results with this operation. Once the vegetation was gone, we tilthed the courts and re-seeded using a 60:40 mix of Aberimp/Aberelf.

My reasoning for undertaking such an extensive renovation was the massive thatch problem on all the courts. The thatch had built up over a long number of years. By using the Koro, we are returning the courts to their original condition-a fresh start. We have gone back to the base soil, which actually has low clay content of about 7-8%.

This isn't ideal for grass tennis, but having said that, the type of tennis played at Hurlingham is more recreational than competitive. What is more important to us and the members, is playability, if we had a much higher clay content then the courts would take far longer to dry and therefore fit for use after rain.

The match courts are our blocks I, J, and K and these courts are treated separately to all our other grass courts. These courts are used for tournament matches and therefore have much higher clay content, the work on these courts mirror the higher standard played.

We don't do any aeration on the courts during the playing season, primarily because the rotation system that we employ to maximise use doesn't give us the opportunity to take courts out of play for long. We have to have six grass courts ready for use every morning, with another two each afternoon. At weekends we have twelve courts ready for the members.

In the old days, there used to be a date in the diary, maybe the 7th or 8th of September, when all the grass courts were finally closed for the season. These days I have introduced a new system, to enable members to continue playing for as long as possible. We can't possibly renovate all the courts immediately, so it made sense to start closing courts only when we were ready to get on with the work.

There are eight blocks of courts here, comprising of 27 individual courts. Once we start work on a block, then they are then out of bounds to members until next spring.

At the end of the season, the first job after the nets have been taken down is to reduce the height of cut to 6mm. This helps to take out excess foliage without over-stressing the grass. We then go hell for leather with our Huxley machines, raking out as much debris as we can. These scarifiers are used in a number of directions with the sole aim of cleaning the immediate surface to avoid thatch building up.

Once the court is clean, we'll soak the court to get some moisture into the profile. I'll then aerate using a Sisis soil reliever down to a depth of 200mm, followed by another aeration operation using an Aercore or the Technicore to a depth of 100mm, using 12mm tines. The pattern will be at 40mm centres.

I like to use big tines to punch plenty of wide holes into the surface; this will help the amelioration of the new dressings into the existing soil profile.

Once the aeration is completed, the seed is applied using a Proseeder. I tend to seed up to twice the recommended rate, which some may disagree with, but you do what you find best, and I find that the best results for us are achieved in this manner.

We then top-dress the court, brushing and looting in the dressings, and turn on the irrigation as and when required.

This renovation is carried out on all of our courts, with the exception this year of court blocks C, D and F. The first job on these courts will be to aerate, again using the Soil Reliever to gain a good depth. Once aerated and the Koro has stripped the courts back to bare earth, we will use the Graden machine to tilth the surface, this machine is extremely aggressive and will loosen the surface sufficiently to provide a good seed bed. We will not need to apply any dressings, just seed the area and drag mat and brush the loose material and seed back into the grooves.

Then with irrigation we will await germination. If conditions are right, we may top-dress the new areas in late October, early November.

The main period is during June, July and August. In August they estimate the courts will evapo-transpirate about 7mm of water a day, so we try to compensate this loss with appropriate quantities of water. The watering has to be monitored and there is no set pattern to what we do, it is a daily decision, based on natural rainfall, temperatures and the look of the grass. We obviously don't want to over water, which would cause leaching of the soil nutrients and encourage Poa annua.

At the moment, we are in a situation of drought and we simply have to put back what is being evaporated each day.

The other note to make, as we look to the end of the season, is that we are now nearly geared up for the renovations through September and October.

Most of the dressings are now delivered, the seed and fertilisers are on order, and our mechanic is busy servicing machinery that will be working hard during the period. We have new sets of tines and blades for the machines in stock, so hopefully the whole renovation project will run smoothly, subject to the weather of course.