0 The man from Del Monte

This year, Pebble Beach celebrates its one hundredth anniversary. The course, that began life as part of the complex of the Hotel del Monte, hugs the Pacific coast of Monterey Bay and is regarded as one of the finest in the world. This June, it hosts the U.S. Open for the sixth time. Golfdom's Editor-in-Chief, Seth Jones, went to meet Chris Dalhamer, the man charged with readying the course for the world's finest golfers and the millions of television viewers around the world. 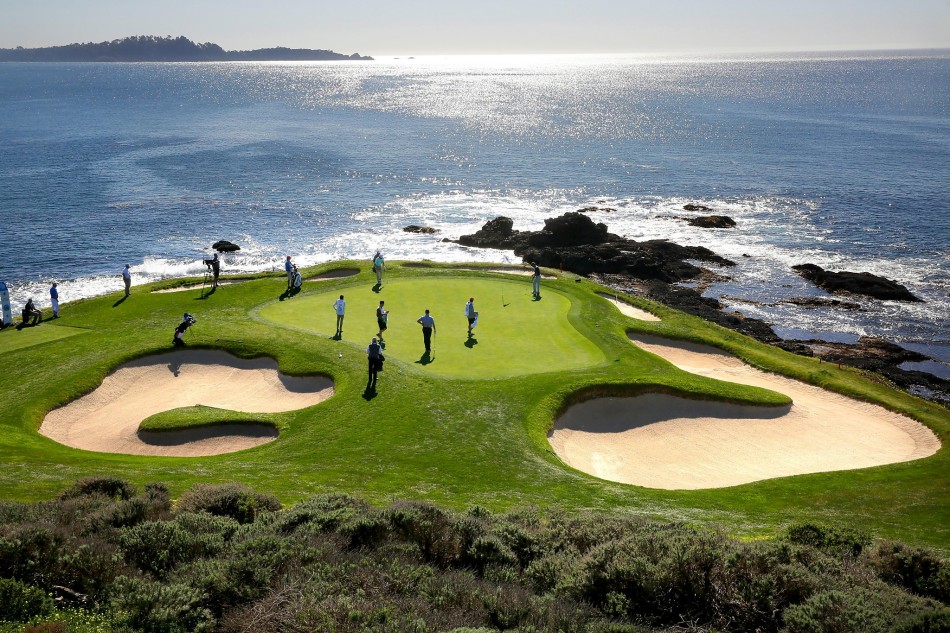 It's been nine years since Pebble Beach Golf Links hosted the U.S. Open, but somehow it doesn't seem so long ago. Time flies in Pebble Beach, California, something longtime assistant superintendent Jack Holt can attest.

"It's been thirty-eight years I've worked here, going on thirty-nine," he says, "and I couldn't tell you how that happened - it goes by so quickly. It's unbelievable. This will be my fifth U.S. Open."

Rick Pieper will celebrate his thirty-ninth year working for Pebble Beach Resorts this month. He started out as a "car man" at Spyglass Hill, before making the switch to the maintenance team when he learned he could go from $4 an hour to $6 an hour. After a few years on the crew, he fell in love with the gardener at Spyglass Hill, but she told him she wouldn't date a co-worker (or a married man), so Pieper asked the superintendent if he could get a transfer.

He got the transfer. Within two weeks he was divorced, working at Pebble Beach and had a new girlfriend.

"It was at the beginning of getting ready for the '92 U.S. Open ... but I also worked the '82 U.S. Open," Rick recalls. "We came over from Spyglass to help them out, because, back then, the (U.S.) Open had the crew, and maybe about four other extra guys. There were only about fifteen or sixteen guys that would go out and get the course ready for the '82 U.S. Open!"

It will be a crew of 140 maintaining the course the week of the 2019 U.S. Open - forty members of the Pebble Beach crew plus one hundred volunteers. Quite an upgrade from what Rick remembers in 1982. But some things never change; he's still working U.S. Opens at one of the finest golf courses in the world and, yes, he's still married to that gardener. 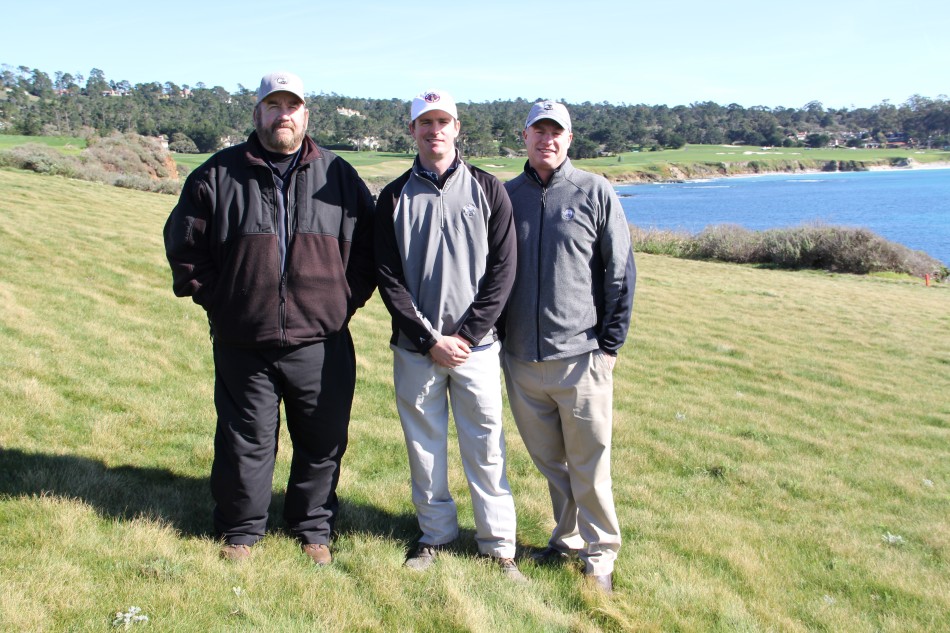 It's all par for the course at Pebble Beach. Chris Dalhamer, Certified Golf Course Superintendent, works as director of golf course maintenance over all four courses at Pebble Beach Resorts: Pebble Beach, Spyglass Hill, the Links at Spanish Bay and Del Monte Golf Course all fall under his jurisdiction. Major championship golf, professional golf and once-in-a-lifetime golf is nothing new to Chris and his crew.

"We want to exceed expectations each and every day," Chris says. "We tell that to our crew all the time - the people playing out here are having a once-in-a-lifetime experience, that's sort of our Pebble Beach motto. The day you forget that is the day you start losing ground."

Chris started working at Pebble Beach as an intern in 1993. A native of the area, he first fell in love with golf maintenance as a high school kid working on the crew at Poppy Hills Golf Course in Pebble Beach. He graduated Chico State University, Chico, California, with a degree in business and a minor in plant science. From there, he participated in the Northern California Golf Association's internship programme, which got him the internship at Pebble Beach. He was eighteen months into the internship when the superintendent at the time, Mark Michaud, promoted him to assistant superintendent, a job he held for five years. 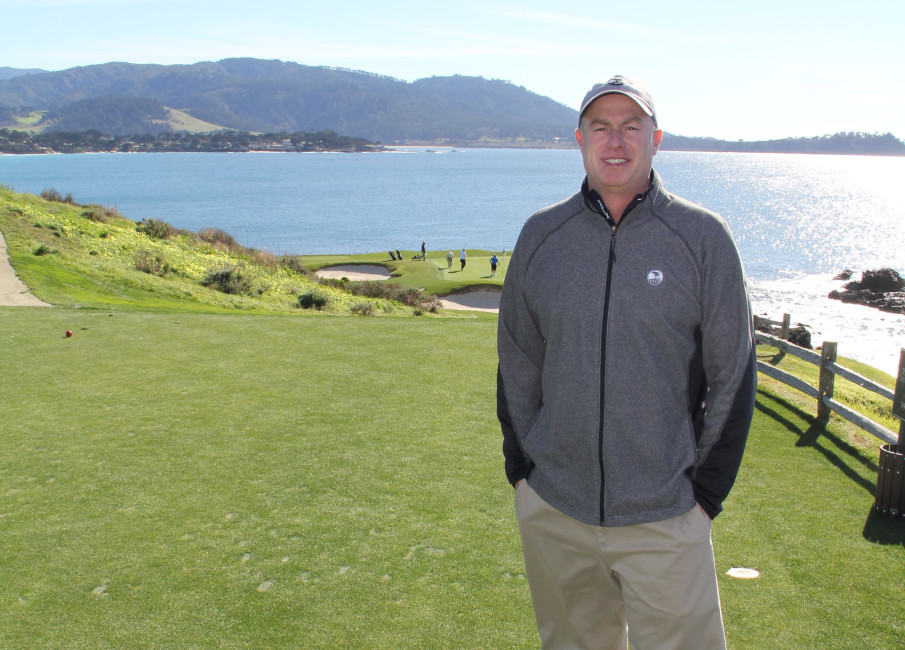 Chris left to take the superintendent position at Carmel Valley Ranch Golf Club in Carmel Valley. When Troon Golf took over management of Carmel Valley, he was promoted to Troon's senior agronomist for the West Coast. A year later, Spyglass Hill, a course he's always loved, called. Three years into his tenure as superintendent at Spyglass, the position at Pebble Beach opened up, and Chris has never looked back.

And how could he? With so much high-end play, there's no time to look back.

"From August 2018, we're going to have two USGA events all the way to June of 2019," Dalhamer says. "And then two PGA (Tour) events, plus another tournament ... we're always in tournament mode. That's a solid 10 months of tournament mode building, breaking down, getting prepped."

Thankfully, Pebble Beach has the tools - and the talent - to handle such a workload.

Jon Rybicki has worked as the mechanic at Pebble Beach for the last five years. He has experience both as a mechanic and as an assistant superintendent, but what was new to him was the fury with which the Pebble Beach crew attacks a task.

"It's just a different culture, it's a machine," he says. "When we go out to do something, we put all our effort into it and get it done quick, and a lot of golf courses aren't like that - you take your time. That's the biggest difference between a normal crew and this crew." 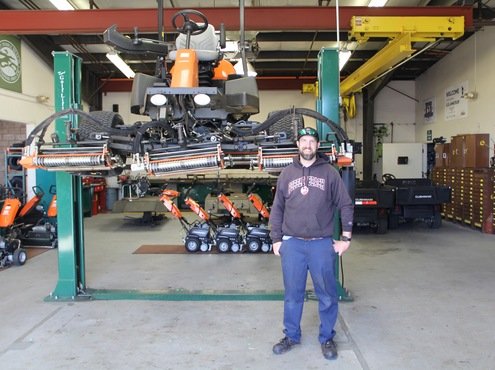 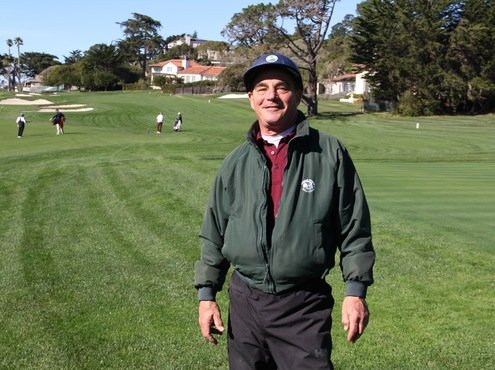 Pebble Beach operates Jacobsen's Eclipse II walking greensmowers, Jacobsen 550 fairway mowers and Jacobsen AR5 rotary mowers. Whilst the course will play very similar to the 2010 U.S. Open, one change will be the gained knowledge the course will bring to the tournament since then, especially on their Poa annua greens. The United States Golf Association partnered with Pebble Beach to study the use of wetting agents on the course, hopeful to have the greens slick, yet attractive, in June.

"We've worked in conjunction with the USGA, they funded trials on our greens to see how we can get them as dry and as firm as possible, but consistently rolling and not aesthetically displeasing," Chris says. "I'm not going to say it's going to be perfectly green, but it's going to be dried down to a level that is tournament championship conditions, but you won't see pock marks."

Chris says that, for him and his staff, though it can sometimes be a grind, it never gets old caring for a "national treasure."

"The opportunity to take care of a historic property, and to have great ownership that puts the resources into place ... you take pride in that," he says. "You take pride in a national treasure, making sure you're shining it. They day you don't, you have to move on. We look at it as an honour. The footprint of this is pretty special."

About the author: Seth Jones is Editor-in-Chief of Golfdom, regarded as the preeminent resource for Golf Course Superintendents and greenkeepers in the USA. www.golfdom.com

All images © Golfdom except the lead image © Pebble Beach

In the early part of the 20th century, Samuel F.B. Morse was challenged with making the Pebble Beach area an attractive real estate investment in order to find a buyer. He decided to create a one-of-a-kind golf course with unsurpassed beauty and an element of difficulty that would always be challenging. 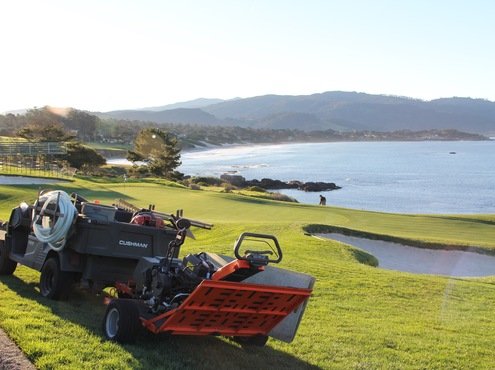 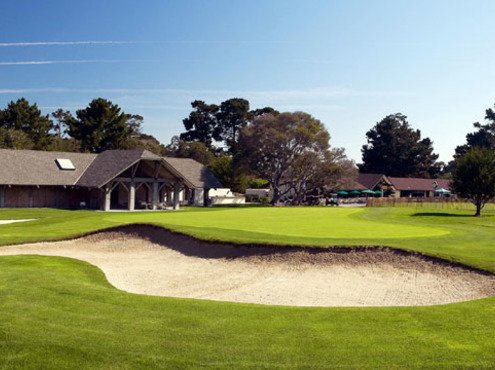 In December 1926, Del Monte hosted the 1926 Monterey Peninsula Open on Pebble Beach Golf Links, putting up a $5,000 purse and attracting most of the country's top golfers - professionals and amateurs. Harry "Light Horse" Cooper of Texas won with a 72-hole score of 293, five over par.

In September 1929, Pebble Beach hosted its first national tournament: the U.S. Amateur field, and continued to host regular high profile events, even through the war years; most notably the U.S. Women's Amateur, the Bing Crosby National Pro-Am and the U.S. Amateur.

In January 1958, television covered the Bing Crosby National Pro-Am for the first time. Bing himself hosted the broadcast of the final round live from the 18th green. 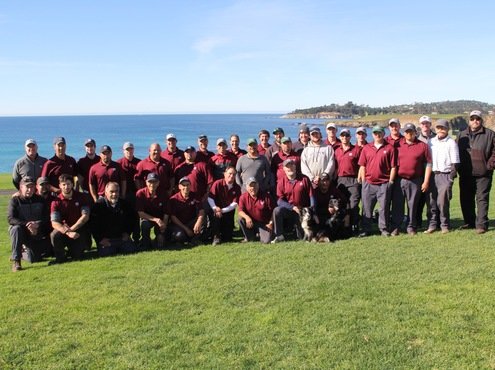 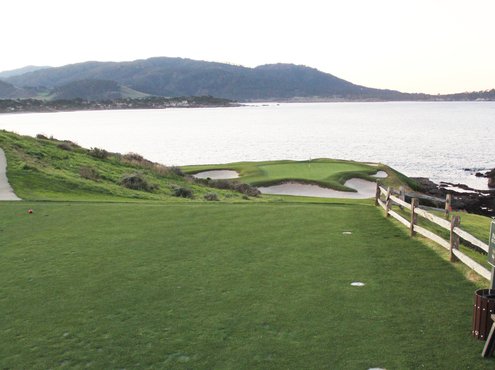 Their second Major was the PGA Championship in August 1977, with Lanny Wadkins winning on the third hole of sudden death.

Pebble Beach has remained a popular choice as host of the U.S. Open, with tournaments played in June 1982 - which featured the battle between Tom Watson and Jack Nicklaus and the most talked about shot in golf. Watson was the eventual winner - June 1992 (Tom Kite), June 2000 (Tiger Woods) and, June 2010 when, following course enhancements by Arnold Palmer, Graeme McDowell ran out the eventual winner, posting an even-par 284. In doing so, he became the first European to win a major on American soil since Tony Jacklin in 1970.

In 2001, Golf Digest ranked Pebble Beach Golf Links as the No. 1 Golf Course in America - the first time a public course had been so honoured.

The 2019 hosting, to mark the course's centenary, will be their sixth U.S. Open and the tournament is scheduled to return again in 2027 following the hosting of the U.S. Women's Open in 2023