Moles live throughout mainland Britain wherever soil is deep enough for tunnelling. They are absent from Ireland and most islands off the U.K. coast, with the exception of Anglesey, the Isle of Wight and a few of the Inner Hebrides. 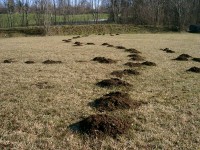 They were once known as mouldywarps, from the Nordic muldvarp, meaning soil thrower, and is still called the maulwurf in Germany.

Moles mate once a year between February and June. 95% of all matings are successful. Females are on heat for only thirty-six hours and, after mating, the female evicts the male from her territory. Gestation is 28-32 days.

The runs or ridges, often seen just under the surface coming from a hedgerow, a fence, a wall or woodland, are pushed up by males testing to see if the resident female is receptive.

Between two and seven young are born in a single annual litter, within a fortress of the run. The fortress will be a larger than normal hill, usually near the centre of the territory, with a nest of leaves and dry grass. The young are hairless when born and, once weaned at around four to five weeks, move away from the female. They disperse above ground to start their own territory. Life expectancy, without hindrance of groundsmen, greenkeepers or gardeners, is four to five years.

The feed runs are tunnels dug to catch worms and other invertebrates. The resident mole flattens the sides of the tunnel making it difficult for anything that blunders into it to dig out. They patrol the tunnels roughly every four hours, spending the alternate four hours asleep! The periods of most activity is at dawn and dusk. 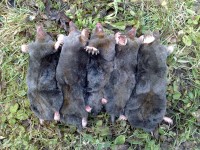 The feed runs will be at the same level as the worms, therefore, in a dry summer when the worms go deeper, the runs will be deeper. Feed runs are generally between 100mm and 200mm below the surface.

Surface and feed runs are never in a straight line and will normally link mole hills.

Some tunnels, at the very extreme of a territory, may be communal if there is a high population. Moles from adjoining territories will also patrol these runs .

They have a poor sense of smell, so the need to bury new traps for a month is an old wives tale - if you have to bury them do it in a mole run with the traps set.

However, their sense of touch is highly developed and, if a trap is touched by a mole without it being triggered, the mole will backfill, blocking up the trap with soil.

Moles sight is only light sensitive - light and dark is all they need to see. If a set trap has not blocked out the light completely, they will see the light and proceed to block it out and, in doing so, prevent it from springing.

You have no legal obligation to check a trap set for small ground vermin, however, there is legislation to prevent undue suffering to wildlife, so you must check traps frequently, keeping a record of when the checks are made.

Why do we control moles? 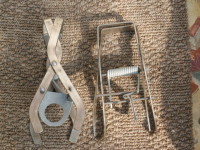 Moles bring up sub-soil, preventing grass from growing and reducing the fertility of the soil. Grass maintenance equipment can be damaged by stones and other detritus brought to the surface. Crops, vegetables, bedding and stock plants are damaged when roots are undermined. Young trees and plants may also be killed by the soil drying out because of mole workings. In addition, bacteria from the soil can make silage unpalatable to animals and cause gastric problems, such as listeriosis, if eaten. This is transferable to humans.

Mole runs can also reduce the strength of flood defences and other retaining embankments.

There are four main methods of control, if you discount the Jasper Carrott method! These are trapping, fumigants, repellents and smoke bombs. 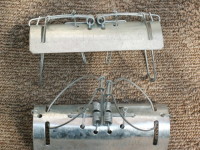 : There are four main types of traps used by professional pest controllers to trap moles. These are the Yorkshire, Duffus, Scissor and Talpex traps. All of these traps are set in the runs and not the mole hills.

The Talpex trap is quickly becoming the favourite of professional pest controllers because the width of the jaw reduces the need to be accurate when placing it in the mole run.

Fumigants: There are two fumigants approved for use in the UK - Talunex and Phostoxin. Both are based on the active ingredient aluminum phosphide which, when it comes in contact with moisture, gives off the toxic gas phosphine, which has a strong fishy smell.
Aluminium phosphide may only be applied by professionals that have been suitably trained in the safe use of the product.

However, COSHH regulation state that the least toxic method of control must be used. Therefore, fumigants should only be used after careful consideration and written justification of why a highly toxic product has been chosen. 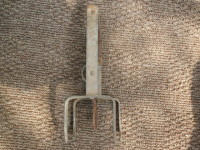 Flasks containing aluminum phosphide cannot be legally resealed once opened, making it an offence to store. This effectively reduces its use to large infestations where all the contents of the flasks are used.

Repellents: Up until recently there has not been a repellent that, in my opinion, actually works. There is, however, a product that is showing some good results in trials presently being carried out against moles, rabbits, foxes and various other species of wildlife that can cause problems with their foraging habits on managed grass.

This method of control will be based on a spray application of the product in areas where control is needed. It has been registered as an agricultural product and can only be used by those holding PA1 and PA6 certification using a knapsack. 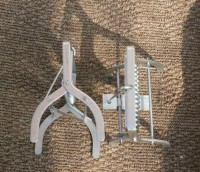 pdate you about this repellent in the next pest control article on rabbits.

Smoke Bombs: Years ago there were many smoke generating pyrotechnics available to control moles. Most of these have been removed from the approval list for pesticides. However, a new one has recently come onto the market which releases a food grade olive oil smoke into the mole tunnels.

The idea seems to be that the olive oil will coat the surface of the run and prevent worms from falling into the tunnels, forcing the moles to vacate the area due to shortage of food. More likely is that, if the smoke bombs do work of a fashion, the moles will just dig more tunnels and cause more damage to the grass!