0 GKB at the most beautiful ground

The Wormsley cricket pitch in Buckinghamshire is often referred to as 'the most beautiful ground in Britain'. When Mick Jagger introduced Sir Paul Getty to cricket, the millionaire philanthropist formed such an affection for the sport he had a replica of The Oval built on the grounds of his estate. The pitch was completed in 1992 and the first match played there was attended by Her Majesty The Queen Mother, the then Prime Minister John Major, Sir Michael Caine and cricket legends Denis Compton and Brian Johnston. What is now known as 'Sir Paul Getty's Ground', Wormsley has in recent years played host to England Women's test matches against Australia and India. 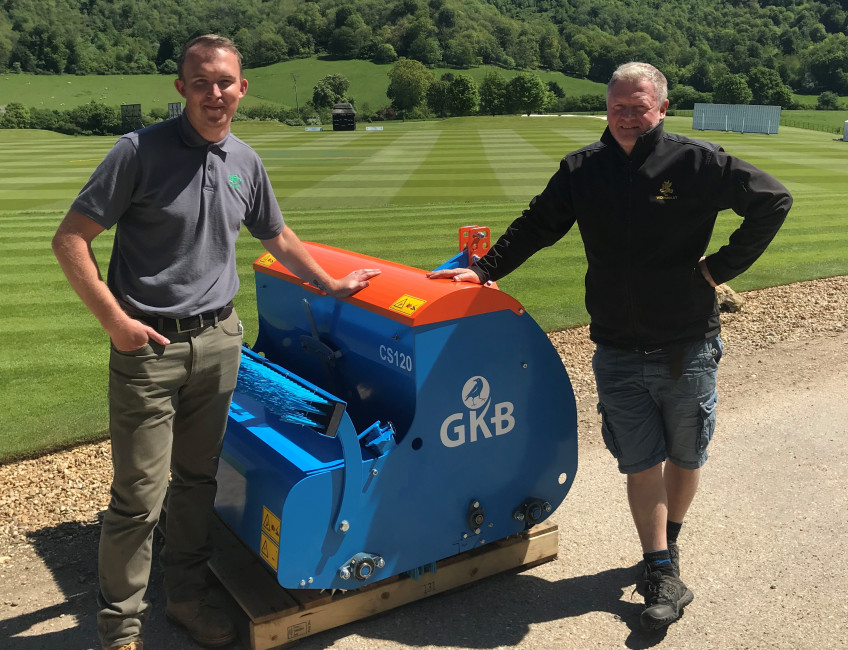 Cricket Manager and former head groundsman for the Wormsley estate, Simon Tremlin heads the team responsible for maintaining the ground. With such a reputation to live up to he's naturally very selective about the machinery he uses and a requirement for a scarifier and seeder led him to official GKB dealers RT Machinery near Aylesbury.

"We do a lot of contracting work as well as looking after Wormsley," says Simon "and it's important to know the machines we use are sturdy enough to meet our needs. Last year we did forty- two cricket squares as well as rugby and football pitches." RT Machinery arranged with GKB Machines' Tom Shinkins for demonstrations of GKB's VStrong and Combiseeder at Wormsley. "We wanted a scarifier that collects as well and the VStrong showed us it's ideal for that, leaving a tidy finish and saving time, especially in damp conditions." Simon adds.

The VStrong follows in the tradition of GKB's Combinator and employs generically developed 3mm carbide scarifying blades attached to the rotor using their Quick-Lock system. An operating depth of 5cm is easily attained without missing any areas. The operating speed of up to 12km/h is a real benefit for the professional contractor, with fast removal of thatch and weed with the ability to collect at the same time.

The GKB Combiseeder can be used for overseeding and initial seeding and features two spiked rollers that open up the soil for the seed to then be spread accurately across the full width, in and around the holes. Creating over 1500 holes per m² the Combiseeder provides accurate seed application at various rates to suit different seed mixes, with drag brushes to incorporate seed and topdressing for minimal surface disruption.

"We've gone with the GKB machines for the way they perform and they are robust enough to withstand the punishment of contracting work," says Simon, "and we have plenty of that ahead as well as maintaining Sir Paul Getty's Ground."

GKB machines can be seen at work in an open day at RT Machinery, Nether Winchendon near Aylesbury on the 5th September 2018 and local demonstrations can be arranged. www.gkbmachines.com 07495 883617