I have been a groundsman since 1989, where I started in the industry as an assistant to the Head Groundsman at the Old Whitgiftians Sports Club in Croydon, Surrey.

We maintained grass surfaces for Cricket, Hockey and Rugby Union. The highlight being when Leeds RLFC (now the Rhinos) used our ground for training before their 1994 Challenge Cup Final against Wigan at Wembley, the first cross code partnership I've been involved with. The Old Whitgiftians are staunch RU 'old guard' but came down to watch the northern professionals go through their moves!

I decided to try a different career in 1994 selling mobile phones, internet & cable tv, whilst the industry was still in its infancy. I worked with Simon Jordan (now owner of Crystal Palace FC), he clearly was more successful than me! In 1998 I was made redundant from my sales job with Cable & Wireless Communications when the company was sold to NTL (now Virgin Media). With my redundancy in my back pocket, I set off to Australia to meet up with friends who moved to Sydney in 1995.

By the spring of 1999 I returned to the UK, but my love affair with the Southern Hemisphere was just beginning! I visited the Old Whitgiftians again, which was now being maintained by a contractor, Alex Guild. I asked him for some work, he suggested I start up my own contracting business and gave me some of his clients in order to reduce his own work load.

I built up a successful business, still managing to go over to Australia every winter for a month and working the other 11 months without a break. I took in the Ashes tours of 1998, 2002 and 2006, purely for research!

In 2003 I had to wind up my business because too many contractors had entered the market with their own equipment at lower prices than I could afford. So reluctantly I had to become an employee once more.

I joined a rival contractor (English Landscapes Ltd), maintaining their grass cricket pitches in mid Sussex. Very enjoyable, but the playing standard was below my own expectations, so I moved on after a year.

I had noticed that another contractor (Sportsturf Maintenance Ltd) had started to make their mark in grounds maintenance for professional sports clubs (mainly football and rugby). So I forwarded them my CV just before I enrolled on a intensive one week IOG course for cricket at Cranfield University. During the course they contacted me to offer a job maintaining four cricket grounds for them in the Surrey Championship.

I accepted their offer and set about my work. It soon became clear, that Sportsturf have many contracts, but not that ma

ny staff (ask Dave Saltman, Pitchcare UK founder and former Sportsturf employee)! I had to look after four cricket clubs with only one person to assist me. Very enjoyable and rewarding work, but extremely long hours! I worked for them until November 2007, but moved on because I felt I would never be able to compete with the best in the industry, trying to look after four grounds while my rivals just looked after one!

Whilst visiting the Pitchcare website I had noticed a job advertised in New Zealand working for Recreational Services Ltd looking after grass cricket blocks in Auckland. I was interested. The climate in NZ is a little similar to Southern England, but more extreme in sunshine hours and rainfall millimetres!

After a series of telephone interviews, I was offered the job. So I flew to Auckland via Sydney late in November 2007. When I arrived, fresh from a weeks break in Coogee visiting friends, I started work immediately. The season had been up and running for a month by the time I got there, the previous groundsman was leaving to go to Eden Park, so I was in at the deep end!

As mentioned earlier, the climate in Auckland is similar to Surrey, however, everything gets a lot wetter, and dries out a lot quicker! The clay used in the cricket blocks is nearer to 60%, compared to 25-30% in the UK. I remember one Tuesday it rained heavily all day, I thought the pitch would never dry out by Saturday, yet on Friday I was watering again by hand!

One of the guys from NZSTI, Charles Henderson, advised me that you don't really want root development, because it dries out the clay too much, and the clay binds together well enough as it is. I remember thinking, 'yeah, yeah, what do you know?' In England we are told to aerate a substantial amount out of season, to punch through the layers and develop roots that will suck 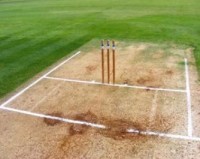 moisture out of the pitch during the playing season. Not in NZ you don't! Now I understand Charles was right and I was just being an arrogant Englishman! You have to keep this NZ clay moist or it will fracture and start to layer...

Also, the end of season renovations are much harsher. During the season you water and fertilize so much, that you need to remove as much thatch as you can during renovations. In England we might scarify in 3 directions and you will still see some grass cover left. In NZ they remove everything and start again. But it is much easier because the blocks normally have up to 5 pitches unlike the UK's 15 plus! A lot less time consuming, so you can really get stuck in! 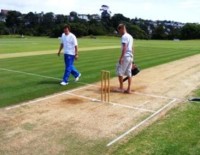 I left NZ in May this year to go on holiday in Thailand (my girlfriend is Thai). Arrived back in UK in June. No work arranged prior to arrival. Big mistake!!! After a few casual grounds jobs (including returfing the pitch at Southampton FC with Kestrel) I got a job with Guildford Borough Council who also look after Guildford Cricket Club (one of my rivals when I worked for Sportsturf!) and Guildford City Football Club. I was only working as an assistant, very enjoyable, but not really a challenge, so when I got the chance to return to Auckland with Rec Services, I jumped at it!

From 1st October I have been back in NZ, the second time around is even better because I have done the pre-season work myself, and I'm exclusively working for Parnell CC this year, which gives me even greater focus on improving standards. They have had a few Black Caps play for them this season,

their coach is very dedicated and their backroom staff are very supportive of my efforts so far. But in this game, you're only as good as your last pitch!!

As for the future, I would like to make New Zealand my home, but work overseas in India (IPL Cash!) or Dubai (Tax free Cash!) for a few months during the close season while it pisses it down in Auckland!