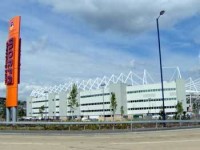 The final preparations are now in place for the grand opening of Swansea's new 20,000 all-seater Stadium at Morfa. The construction began in the autumn of 2003 with the stadium due to play host to its first fixture, a football match between Swansea and Fulham, on 23rd July.

The £29 million stadium will be home to both Swansea City Football Club and the regional rugby team, the Ospreys, between Swansea and Neath rugby clubs. The teams will share the facility on a weekly basis throughout their playing seasons. The Ospreys will be part sharing their fixtures between the new stadium and the Gnoll in Neath, planning to play at least 14 of the fixtures at the new stadium. 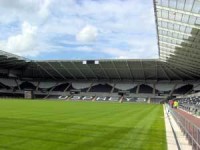 Funding for the stadium came from Swansea Council by selling retail development land to a private developer. The New Stadium is managed by the Swansea Stadium Management Company Ltd, a company with representatives from the Council, the Football Clubs and the Ospreys.

The Chief Executive is very excited about the new stadium and the facilities it has to offer, "We have state of the art event and function facilities offering conference and banqueting suites, exhibition areas and 29 executive boxes. We can also cater for large concerts utilising the pitch area for additional seating and standing accommodation."

The architects, who are leading stadium architects with vast experience of producing quality stadiums such as the Stadium of Light in Sunderland and Newcastle's St James Park, designed the New Stadium.

Some of the features incorporated are: - 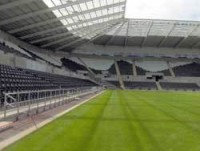 Later in the month the Ospreys will play their inaugural match at the stadium against Wasps, the Premiership Champions.

The main stadium was constructed by Interserve and the pitch construction contract was awarded to Leicester based company Hewitt's Sportsturf in November 2004.

The drainage of the pitch consists of a primary grid system with 110mm diameter pipes set at 6 metre centres overlaid with a 10mm gravel carpet topped with a blinding layer of 6mm gravel.Over 5,000 tonnes of laboratory tested materials were laid to construct the pitch consisting of a fully engineered gravel raft with a 90/10 on site prepared sand and soil profile for the upper rootzone before being sewn with the Desso Grassmaster Fibres.

Hewitt's are responsible for maintaining the pitch for the next twelve months and have employed the services of Dan Duffy who, until recently, was Head Groundsman at the Bridge Meadow Stadium, the home of Haverfordwest County FC. Dan, an Australian, has been working as a Groundsman since coming to the UK some eight years ago, having previously worked at the North Sydney Oval. He has been involved with the construction process right from the start and has gained a wealth of experience as to how his new pitch was built. 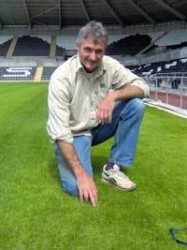 The Desso fibres were sewn to a depth of 200mm using two machines that were operational for over 15 hours per day. Each machine took over 12 hours to stitch the full length of the pitch, the whole process taking well over 12 days to complete. Installing the Desso prior to sowing meant that levels were able to be adjusted as required, leaving a perfect even surface for the seed.

Over 400 kilos of Advanta MM25 80% ryegrass and 20% Slender creeping red fescue were sown on the 3rd April, using dimple seeders sowing in multiple passes diagonally and across ways. The grass completely germinated within 15 days, which was pleasing as there had been a lot of cold weather with temperatures down to 4C.

The pitch contract also provides for two pump units which can not only blow air in via the drainage pipes, but also suck excess water out. A mobile lighting rig is also included which will considerably assist grass growth during the winter months.

Dan is currently carrying out his daily works to the pitch including mowing, fertilising etc and keeps in daily contact with Hewitt's base in Leicester and the pitch consultant Mike Harbridge of Professional Sportsturf Design.

Closely monitoring and correcting water and fertiliser regimes will be the key to good sward establishment in this new stadium environment, however; as the pitch is going from strength to strength, everyone is looking forward to the upcoming fixtures as it will signal the start of a new era in sport and event promotion in Swansea.