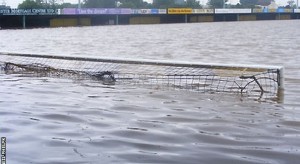 It has been 2,384 days since Gloucester City last played a competitive game at home.

The yellow and black painted walls still mark out the Tigers' territory at Meadow Park, their residence since 1986.

But inside the ground, it is like the ghost of football past.

"When you see it in this state it brings a lump to my throat," supporters' trust chairman Lee Mills told BBC Sport.

It is the first time Mills has stepped foot in his club's home since it was devastated by a third major flood in 17 years, in the so-called summer of 2007.

The grass on the pitch is eight feet tall and littered with rogue trees and recycling bins. Seats have been ripped up, the roofs of the dugouts have caved in.

The directors' box - supposedly the best view in the house - is surrounded by smashed glass, and a dishevelled mattress suggests that the space has become shelter for someone who, like the club, is homeless.

"It still looks so familiar," Mills added, standing in his beloved T-end stand. "The paint on the far side I remember vividly. I painted that on a Sunday afternoon. We were so proud of our stadium."

When the River Severn burst its banks after three days of torrential July rain and spilled into Meadow Park, the water reached the top of the crossbar of the goalposts - that image, captured by fan Neil Phelps, became synonymous to the situation.

The deluge eventually subsided, but it left a trail of destruction.

And after six years of setbacks, the Conference North club have no 'home' to host League Two Fleetwood in the FA Cup on Saturday.

Instead, they will once again travel 12 miles to their temporary base at Cheltenham Town for their first round tie.

"The fans do their best," said life-long supporter Matt Yates of their attempts to make Whaddon Road feel like home. "We put our flags on the seats to hide some of the red."

And Mills admitted: "We've got used to the nomadic lifestyle. If we had a home ground tomorrow I don't think a lot of us would know how to run it."

See the rest of the article on the following website BBC