0 The Oldest Track in Town

The Oldest Track in Town Ludlow racecourse is one of the UK's oldest racetracks. Tradition has it that in the fourteenth century soldiers from Ludlow Castle came to the site not only to practice archery but also to match their horses. Historic records show that the course was in existence as far back as 1729.

The course nestles in the heart of the Shropshire countryside within two miles of Ludlow Castle and the town centre.

It is now a National Hunt course, although jumping only started relatively recently in the mid 19th century. The one and half mile cou Today Ludlow stages 16 meetings a year. It still manages to retain its 'olde worlde' atmosphere, part of the main stand is still in its original Edwardian form, and provides a wonderful setting for punters and horses alike.

The Clerk of the Course is Bob Davies. He has been at Ludlow for 21 years and, over the years, has transformed the course into a well-used and much respected venue. In addition to racing, the facilities are now used for a wide range of events from weddings and dinners to auctions and exhibitions.

The Head Groundsman is Mike Morris who has spent the last 35 years looking after all the grounds and race tracks at Ludlow.

His role is very much a hands on affair, he still does the lions share of the grass cutting and watering tasks. There are four other full time staff who specialize in maintaining the fences, rails and undertake other mowing duties.

They run a very tight ship at Ludlow, equipment is the minimum needed to maintain the course. Mike drives a Case tractor to operate the front mounted 12 ft Votex mower which is used to cut all the grass on the 20 acres of course.

It usually takes a full day to mow the complete course, the turf is maintained at a height of 75mm between May and September and raised to 110mm during the racing season, October to May. 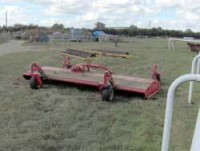 However, keeping enough moisture in the ground in the Spring and Autumn is one of Mike's main priorities. To help him achieve this he has three 250 metre Bauer hose reels and booms for use around the course. Water is sourced from a reservoir and a bore hole on the course and is pumped through one and a half miles of six inch ring main.

He applies between 10-18mm of water on each application, aiming to maintain the course with a going of good to firm or better during the racing season.

Once the last meeting has been staged, in May, Mike begins the renovation programme of all the take-off and landing areas. These areas are repaired and re-sown using an amenity ryegrass fescue mixture, but if they are very badly worn the surface is replaced with 40mm big roll turf.

All bare areas and divots on other parts of the course are repaired with top dressing and seed. The course is disc drilled every year. Over 200 tonnes of top dressings were used this year.

Two applications of a low nitrogen compound fertilizer are applied during the growing season to stimulate growth without forcing it too much. When there is enough moisture in the ground to allow deep penetration, a programme of aeration is carried out using SISIS knife tines, spiking to a depth of 200mm.

In the autumn, before the start of each season, the course is vertidrained by a contractor. They plan to purchase their own machine so that this work can be carried out more often, especially on those areas which are crossed by the golf course.

During the summer all the fences are repaired and dressed up for the coming racing season. All the fences and hurdles are built by hand by Mike's staff. The fences are completely renewed every other year with birch supplied from Yorkshire and spruce sourced locally.

This summer the parade ring has been refurbished, a new rubber surface is being laid for the horses to walk on. Race days for Mike and the Clerk of the Course involve working 15 hours plus, beginning with an inspection of the courses to declare the final going.

Before any race meeting the going of the course has to be declared to both the trainers and public. This process begins a week before the actual race meeting. It involves an inspection by the Clerk and Head Groundsman who walk both tracks testing the ground with a Turftrax going stick and a traditional walking stick.

Once the going has been declared and recorded Mike will continue to monitor the tracks on a daily basis up to the day of the race meeting, keeping the authorities and trainers informed.

Many race courses have one or two road crossings, but Ludlow has seven! These are kept open during meetings, only being closed for the duration of each race. Coconut matting, 50mm thick, is used to cover the tarmac and provide a safe surface for the horses. 100 mats are required to cover the roads, quite an undertaking for the staff, but they have perfected a technique that enables them all to be placed out within 4 hours.

During the meeting a member of staff is positioned at each road crossing to keep an eye on any movement of the mats or damage from vehicles crossing between races.

At the moment coconut (coir) matting is the only viable material for use in these areas when the roads have to carry normal traffic between meetings. Ascot has now put in underpasses to replace its road crossings but the cost of this is beyond the resources of a small course like Ludlow. 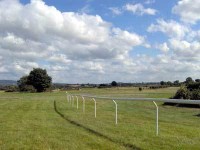 Each meeting has seven races with up to 100 horses galloping and jumping the fences. Damage at the start of the season is minimal but during the months December to March the damage can be quite severe.

Once the racing has finished and the punters have all gone home it is left to Mike to lock up and secure the site.

I asked Mike what he enjoys about the job. His reply was "the whole environment of it! I love horses, the racing fraternity and, above all, working outdoors. It's a very rewarding job, even though we all work long, hard hours."