3 The Osprey has landed

The Osprey has landed 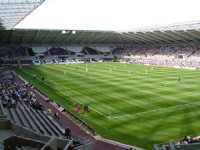 It was a pretty good build up to the Stadium's opening. A fantastic surface was in place to work with, especially when you consider that the grass was only 14 weeks old, but with a root system already heading well over a depth of 225mm you really have a head start in any maintenance/preparation to be carried out.

We had pretty well reached the desired height of cut from scratch for this stage of the season by early July, so that was well in place without having to go radical one way or the other. Initially, all the mowing was done with a Dennis walk behind, but once the Toro triplex was delivered around this time, this enabled us to get a few good double cuts in a little more regularly. And also to put a little more weight back on. But the Dennis is still a key mode of cutting.

So, with the final week's match preparation ahead, the system didn't have to be tampered with too much. The weather was kind, even gave us a bit of rain midweek and the grass was responding well to rain and sun alike. It had had a feed the previous week, which carried it through to Saturday really well. We striped it up in a chequerboard fashion, N/S - E/W, stringing out the stripes just to make sure all was square. 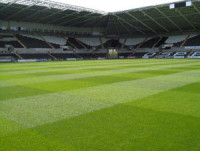 The first match was an attractive game of football appreciated by a reduced capacity crowd of approximately 12,500 just for the first game. A sell-out. In a Testimonial Match for the great Alan Curtis, the match result, Swansea 1 - Fulham 1. The pitch result? Well, such minimal damage, a few scuff marks here and there. A strong healthy sward of grass and the Desso Grassmaster system really complement each other, and have held together well, considering some of the challenges in game 1.

With the Osprey's first match against another Rugby heavyweight, Zurich Premiership Champions, the Wasps on Friday 26th August, it's going to be a great season ahead.