"Professional football pitch management is no longer about providing a surface which just has to withstand the rigours of ninety minutes of football; any league groundsman will testify to this"
Carl Pass, Premier Pitches

Premier Pitches are a Sheffield based company owned by Carl Pass. He started the company thirteen years ago when he saw the potential to put his skills into good use helping renovate professional sport pitches. Previously, Carl was, for seventeen years, Head Groundsman at Sheffield University, and it was here that he developed his renovation techniques.

In his latter years at the university, Carl also contracted out his labour and machinery to help local clubs whilst, at the same time, earning the university additional income and, of course, began building up a good customer base.

In 2001, he took the decision to leave the university to set up his company to provide a specialist end of season renovation programme using the new and innovative Koro fraise mower, power harrows and sand spreaders, along with other more traditional machinery such as vertidrains and seeders.

He was soon plying his trade at many local football clubs, taking on their end of season renovations and offering a comprehensive natural turf contracting service ranging from full construction to the highest specification, including undersoil heating systems and grow lights, to daily maintenance.

I met up with Carl on the site of Newcastle United's training ground at Darsley Park, Longbenton, where he was busy constructing new Mansfield Sand Fibrelastic pitches under the watchful eye of Head Groundsman, Michael Curran.

"Professional football pitch management is no longer about providing a surface which just has to withstand the rigours of ninety minutes of football; any league groundsman will testify to this," says Carl.

"Groundsmen now have the additional pressure of providing a surface that will be used for pre-match warm-ups, which can last up to thirty minutes, half time activities, including penalty shootouts, marching bands, dancers and junior matches played across the pitch. Then there are the post match warm-downs which often become full-blown training sessions for squad players not involved in the ninety minutes of action which has just unfolded."

Success in European competitions brings additional burdens, as travelling teams have access to the match pitch for training sessions on the day prior to the tie being played. Other events, such as music concerts, bring in much needed revenue to clubs who are in the business of making money by what ever means to support their main objective, which is to be successful on the pitch. 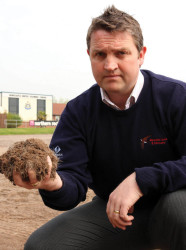 "All these activities are undertaken, often in stadiums which have either evolved into multi-use venues or, worse still, have been designed with little or no thought to the well being of the pitch," says Carl. "The consequence of such relentless use is a degenerating surface suffering from compaction, poor drainage, little or no grass cover, uneven levels or a combination of the lot."

"In the old days, it was a case of keeping the grass cover you had by scarifying it to remove debris, vertidraining it to put air back in the soil profile, topdressing to restore levels and seeding to repopulate the sward. This practice does still go on for the majority of soil based pitches but, with the introduction of the Desso system, and Mansfield's fibresand and fibrelastic pitches, that would simply not work," says Carl. "In most modern stadiums, using one of these systems, we will fraise off the top 15-20mm, topdress with new materials, power harrow to mix and restore levels and then overseed. This would be classed as a straight end of season repair. Sometimes, however, more in depth work has to be undertaken."

"Fibresand is not an easy material to work with," says Carl, "and it was a steep learning curve to understand how to work with it. Mansfield Sand were very supportive and, in truth, we have learned a lot from each other whilst also building up a good working relationship. It is not just a case of turning up and 'doing the job', it is very much about planning and logistics. For example, a new pitch construction will require hundreds of tonnes of material to be imported and exported from site.

"April, May and June are manic months for me and the team. We work very long hours, seven days a week to ensure the work is completed within, what is, a very narrow window of opportunity. Invariably, we travel straight from one club to another, and we use our own caravans for accommodation, which enables the staff to remain on site to ensure that no time is lost whilst ensuring a security presence at all times."

Carl has several crews out on the road to enable him to undertake all this work. "It has taken several years to build up a highly experienced team. All my senior staff come from a grounds management or greenkeeping background and, as such, the whole team are well informed and able to understand the needs of a modern sportsturf manager. I oversee all the major contracts myself, which also affords me the time to keep in close contact with my clients." Carl has worked hard to build up a great relationship with his customers over the years, with the aim to retain continuity.

With the development of Fibrelastic in recent years, Carl had to perfect new methods of handling it. "We had to redesign some of our machinery and equipment so the material would go through it, again working closely with Mansfield Sand. I have also found that working with the weather is a key factor; there are critical times when water needs to be available to help work the material down. It's all been part of the learning curve, and we can now, typically, complete a renovation in seven to ten days."

Investment in machinery to undertake all this work is "substantial", although Carl is reluctant to discuss figures. "Let's just say it is frightening!" he says. His fleet includes a large number of John Deere tractors to pull the various implements, and a huge transporter to move machinery from one site to another.

"Newcastle United have been excellent customers for the past four years," says Carl. "We installed the first fibrelastic pitch in the country at St. James' Park back in 2007, two at the training ground in 2008, and have been contracted to build a third for use by the first team. It will mirror the stadium pitch and also have undersoil heating to ensure it remains playable in the depths of winter, thereby reducing the need to train on the stadium pitch."

"The first task was to glyphosate (weedkill) the existing vegetation, allowing ten days for the grass to die, before beginning the job of removing the top 15-20mm of the pitch, power harrowing to restore levels, adding new materials and overseeding," explains Carl.

To help make the job of installing the undersoil heating pipes easier, Carl made the decision to shockwave the pitch to a depth of 350mm to help reduce the drag on the mole plough used to install them. "I employed the services of another contractor, Ken Pryor & Sons, who specialise in the installation of undersoil heating systems. Ken and I have worked on many pitches together."

"The pitch already had a fully automated pop up irrigation system installed, all of which were marked and their position noted to ensure they did not get damaged during the reconstruction."

Once initial cultivation was completed, the new Fibrelastic rootzoone material was applied, in this case over 350 tonnes, to replenish any material lost during the removal of the surface with the Koro TopMaker. "It is important to use our specially adapted Raycam Speedresser, which is capable of handling this type of material without bridging or blocking as work progresses."

"The evenly spread material can then be integrated into the top l00mm by further cultivation, normally with a rotary harrow," says Carl. "At this stage, visual inspection will dictate how many passes with the cultivator is required to produce an evenly blended rootzone. The final pass will be made and levels trimmed to be consistent with those of the original construction."

"Consolidation will be required next. This is a vital aspect of the works and, as work progresses, it may be necessary to irrigate at this stage to maintain a degree of moisture in the immediate surface, preventing the separation of fibres. Fines in the rootzone can also find their way onto the surface as a dusty residue if irrigation is not available, causing problems later in the season by impeding surface drainage."

Fine finishing is a vital aspect of achieving the end result. Carl has perfected this operation and is confident of the final levels achieved. Once this operation is complete, it is a case of overseeding the pitch. Again, Carl has formulated a specific method for seeding and ensures the right amount of grass seed is applied per square metre. Usually two passes will be made with this type of machine, but more may be required if the groundsman or consultant dictate otherwise. Finally, the pitch is flat rolled to seal in the seed and produce the finished level.

In total, over 350 tonnes of new fibrelastic sand material was used to construct the new pitch, as well as 350 tonnes of rootzone to renovate two soil based pitches, with all the work completed in fourteen days.

Carl will continue to call in and see Michael to keep an eye on the new pitch, and will be back again in June with his dedicated team to undertake the refurbishment of the stadium pitch.

Premier Pitches have recently been asked to renovate a number of pitches in Europe, and Carl sees this as a great opportunity to build up new contacts and showcase the skills he and his staff have accumulated over the past ten years.

Carl is quick to state that you are only as good as your last job, reputations can soon be lost in the contracting world. He and his staff have worked hard to perfect their techniques and are one of the most experienced contractors specialising in constructing high spec football pitches, particularly the fibrelastic and fibresand pitch reinforcement systems.

It is not surprising that we in the UK have some of the best sportsturf contractors around who are respected for their endeavours, and long may it continue. However, a word of warning, these services do come at a price and, with the cost of materials and transport currently on the rise, it is important we continue to pay the going rate to support these dedicated practitioners.